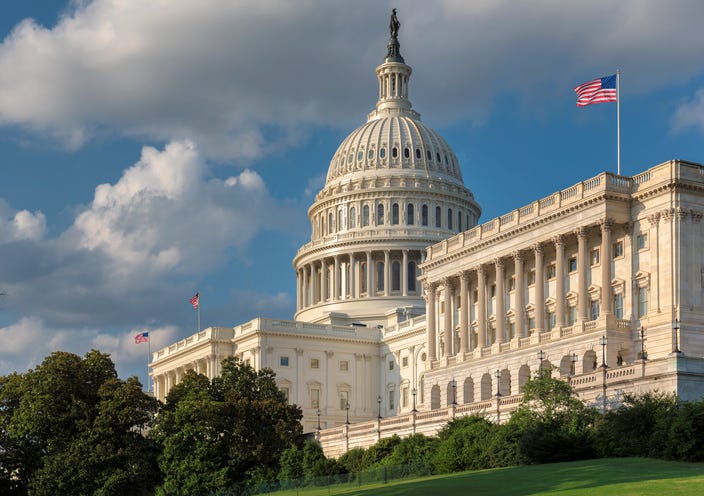 Following the death of at least 19 children and two adults at a Texas elementary school on Tuesday, the call for gun control legislation has been relit with several pieces of legislation being discussed.

In 2022 there have been 27 school shootings and over 200 mass shootings — defined by the Gun Violence Archive as four or more people being shot or killed.

Now, despite most Americans calling for some form of gun control law to be passed, the only obstacle left is getting votes from both parties.

On the Senate floor Wednesday morning, Democratic Senator Chuck Schummer slammed his Republican colleagues, saying this was "Another example of Republicans unwilling to do what it takes to keep Americans safe."

Proposals to ban assault-style weapons or high-capacity magazines are not expected to pass at the federal level. However, there is some bipartisan agreement that could see bills pass, taking the next step at attempting to curb gun violence.

HR 1446, a bill passed in the House, is backed by Democratic Rep. Jim Clyburn of South Carolina and would stop a loophole, known as the “Charleston loophole,” that allows some licensed gun sales to go through.

The bill would increase the amount of time that a federal firearms licensee would have to wait before receiving a complete background check prior to a firearm transfer to an unlicensed person to a minimum of 10 business days.

This loophole was used in the Charleston, South Carolina shooting in 2015 at a historically Black church.

On Tuesday, HR 1446, named the Enhanced Background Checks Act of 2021, was placed on the legislative calendar, meaning that the Senate will vote on it, but it is not known when. To pass, it will need 60 votes.

Another bill, which has bipartisan support, is HR 8, named the Bipartisan Background Checks Act of 2021.

This legislation would expand the purchasing process by requiring background checks for all firearm sales or transfers in the country, something not currently required for gun sales and transfers by private and unlicensed sellers.

However, it is not expected that this bill will pass with the Manchin-Toomey bill, which would have required background checks for all commercial sales, but not for individuals who sell their weapons to family or friends.

The bill was proposed in 2013 by Democratic Senator Joe Manchin and Republican Senator Pat Toomey, and after passing in the House, it failed in the Senate, leaving Manchin skeptical as to whether HR 8 would pass.

"If you can't pass Manchin-Toomey, how are you going to get enough votes for anything?" Manchin asked.