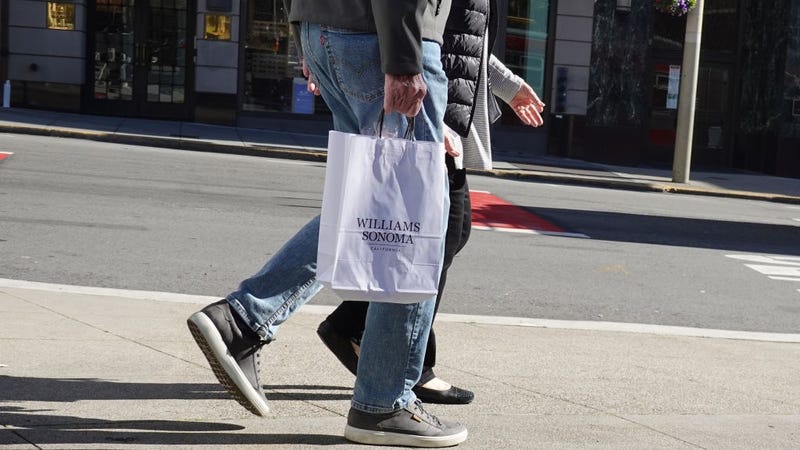 SAN FRANCISCO, CALIFORNIA - JANUARY 27: A shopper carries a shopping bag from Williams Sonoma while walking through Union Square on January 27, 2022 in San Francisco, California. According to a Commerce Department report, the U.S. economy grew at the fastest rate since 1984 with an expansion 5.7 percent for the year after a 1.7 percent expansion in the final three months of 2021. Photo credit Justin Sullivan/Getty Images
By Colin Martin, KCBS Radio

The economy ended the year strong, growing at a 6.9% annual rate in the fourth quarter from October to December, the Bureau of Economic Analysis said on Thursday, a boost from 2.3% in the previous quarter.

"It just goes to show that the U.S. economy has learned to adapt to the new variants and continues to produce," Beth Ann Bovino, chief economist at Standard & Poor's Global Ratings, said.

However, inflation hit a nearly 40-year high at the end of 2021 and the ongoing pandemic caused supply chain issues and massive shipping delays.

The Federal Reserve said early this week that they plan to raise interest rates around March for the first time in over three years to fight inflation.

According to a survey by Wolters Kluwer’s Blue Chip Economic Indicators, the U.S. economy is expected to grow another 3.9% in 2022, which would mark the second consecutive year above the Federal policymakers' estimate of 1.8% growth.

“While we have reached the end of pandemic era fiscal and monetary policy the pandemic is not yet over,” Joe Brusuelas, chief economist at RSM, said. “The rate hikes that are now clearly in play will show up in the final quarter of the year slowing growth. The U.S. consumer and investment in the housing sector will continue to be the primary engine of growth as the economy transitions away from pandemic era fiscal and monetary support.”

President Joe Biden spoke about his administration's determined efforts to boost the economy through creating jobs and fixing the ongoing supply chain issues.

"This is no accident,” Biden said in a statement Thursday morning. “My economic strategy is creating good jobs for Americans, rebuilding our manufacturing, and strengthening our supply chains here at home to help make our companies more competitive.”

U.S. stocks surged after the initial news was released, but the Nasdaq ended up dropping 1.4% by the end of the day.

Without inflation, it's reported that the economy's growth would have been around 10% in 2021.

"We’re hitting on all cylinders producing goods, and that’s good," Ben Herzon, executive director at IHS Markit, said. "But it’s also bad, because the economy wasn’t really set up to produce goods at the level that it’s producing now. That’s one of the reasons we’re seeing some of the problems on the supply side."

"Inflation had some stiff competition from the federal government," Herzon said.