A trip to the wilderness included a frightening brush with a grizzly bear for a group of hikers.

In a video taken by bystanders at Glacier National Park in Montana, a grizzly bear is seen making his way down a trail and then suddenly starts picking up speed toward a group of screaming hikers, reported NBC Montana.

The person filming yells “back up, back up” to the hikers, who start to yell even louder.

"They shouldn't run," another individual behind the camera says, before yelling, "Don't run!"

The bear appears to get closer as the hikers begin running up a hill and quickly separate amongst the forested area. Luckily, the bear doesn’t follow them and starts heading in the opposite direction of the hikers.

"You're good, you're good," the person filming yells to the group, as some in his group can be heard laughing in the background.

According to the outlet, the video was first uploaded to Facebook by Dulé Krivdich.

"Be Bear Aware Folks. This was this afternoon hiking back up after visiting Hidden Lake,” Krivdich captioned the post.

He recounted filming the “500+ pound grizzly” and trying to alert the unsuspecting hikers. 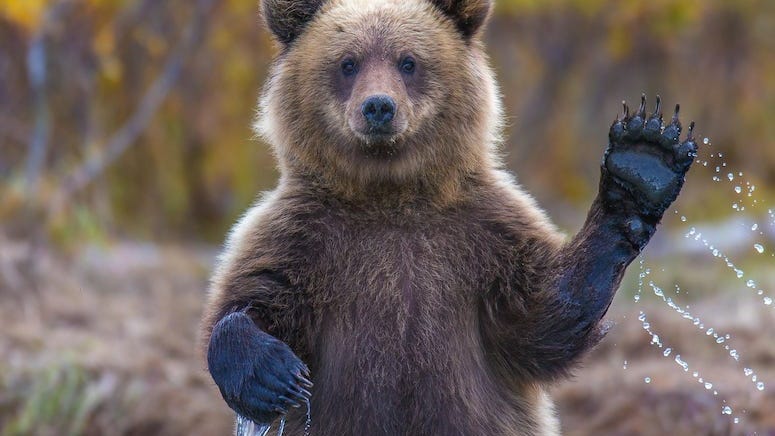 “But just then, the griz made a bluff charge and we saw people booking it like we’ve never ever seen before in our lives,” he added. “But I think that it was a case of the bear not knowing people were coming up as the people had no idea but even once they did the worse thing, they RAN!”

“Thank goodness that it all went well afterwards,”Krivdich continued. “Other than that it was a beautiful day for a hike down to Hidden Lake."

If you encounter a bear, park officials advise to remain calm, avoid eye contact, slowly back away and don't run.