An inspirational photo of medical workers on board a flight to New York in order to help with the coronavirus pandemic has warmed the hearts of people across the country.

The photo was taken on a Southwest flight from Atlanta to New York’s LaGuardia Airport and shows healthcare workers from Georgia flashing smiles and making heart hand gestures.

“These brave souls soldier on in the midst of tremendous risk and exposure, constantly putting the needs of others above their own,” the airline captioned the snap on Instagram. “Their selfless sacrifice is a beacon of light during such a dark time in our world, and no amount of gratitude and praise would ever be enough.”

Nearly 30 medical workers answered the call and boarded the flight to assist with relief efforts in New York City, which has become the epicenter of the pandemic.

The post continued, “This photo embodies it all: bravery, courage, and sacrifice. If it were easy, everyone would do it, but we know that is not the case. Thankfully, this group and countless others do it each day, and for that we are forever grateful and in their debt.”

Southwest later elaborated about the sentiment inside the aircraft.

“According to our crew, these 29 healthcare workers were in good spirits and wanted to do their part to help those in need,” the airline’s spokesperson told “Today.” "Our crew thanked them for their service and sacrifice and wished them well on their journey ahead." 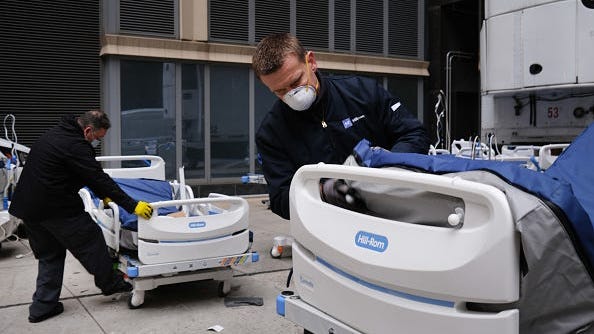 As expected, the comments to the sweet photo have been full of overwhelming praise for the workers and the airline staff.

“I'm so glad you guys are able to help! Heroes helping heroes!,” added another.

“A sincere thank you to everyone on this plane...Including the flight attendants and the pilots flying the aircraft,” commented a third.

As of Tuesday, New York City has 40,900 confirmed cases of coronavirus, with at least 932 deaths.