Toilet paper has become a hot commodity in 2020 due to the coronavirus pandemic.

The white stuff is flying off shelves in major retailers including Walmart.

According to the CEO Doug McMillon, the chain has sold enough toilet paper in the last five days to give every American one free roll.

The New York Post crunched the numbers and revealed that approximately 329 million rolls of toilet paper had to be sold for the statement to ring true.

The number may be striking and you might find yourself worried that Walmart and other stores will sell out of the goods, but McMillon assures that isn’t the case.

He urges customers to buy toilet paper on an as needed basis rather than hoarding the product. 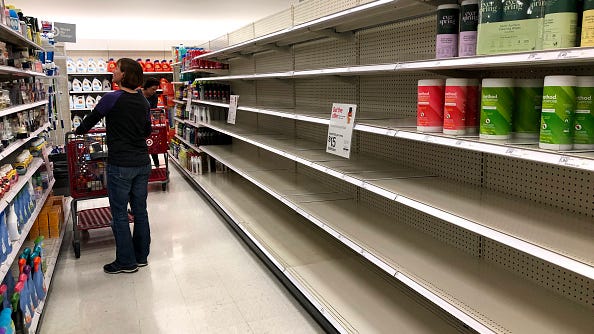 “There’s plenty of flow coming but if everyone could just kind of manage and buy week to week rather than stocking up at this point, it’d be helpful for everybody,” McMillon told TODAY!

McMillon assured that Walmart’s food supplies are in “good shape,” and the only thing they’ve struggled to keep in stock is hand sanitizer.

“We’re working to put it on the shelf, but as soon as we do it’s gone,” he said.

If you’re confused as to why people are stocking up on toilet paper to the point that certain retailers are limiting the number of packs that customers can buy in one trip, you’re not alone, but according to experts there’s a reason for the madness.

Steven Taylor, a professor and clinical psychologist who wrote “The Psychology of Pandemics,” said that a scarcity mentality kicks in when people see others stocking up on goods, which eventually snowballs into a real scarcity.

For those who don’t feel comfortable leaving their homes and want to know how much toilet paper to get, the website, How Much Toilet Paper, can help you calculate how long the toilet paper in your home will last and when to buy more.