Marine biologists witnessed an incredible feat in nature after coming across as many as 70 killer ocras hunting a blue whale.

The "astonishing, a little bit disturbing and truly mind blowing" event took place off the southwestern coast of Australia while Kristy Brown of Naturaliste Charters was leading a whale-watching tour, Live Science reported.

The vessel came across two pods of orcas in Bremer Bay Canyon that were “playing and surfing the waves,” Brown wrote in a March 16 blog post.

Before long, the group witnessed "a long, high blow [spray] that stayed in the air … It was a blue whale, estimated to be 16 meters [52 feet] long, with plenty of years left to live," Brown noted.

“Multiple orcas were on the animal, jostling with it and swimming fast, beside and under it, whilst others dropped off the chase to rest in our wake and cruise along and beside the hunt, easily 200 m [656 feet] back," the marine biologist continued.

Orcas, commonly known as “killer whales” are known for hunting all kinds of prey, including humpback whales, seals, and even great white sharks, according to the Ocean Conservancy.

“At least six big males from different pods,” joined in on the feeding frenzy.  According to the outlet, each pod is home to between six and 12 orcas.

"It wouldn't give up, it went under, and for a moment we thought it was all over, yet again and again its tail would rise up, thick and silver in the dark ocean, surrounded by black and thundering fins," Brown said.

Brown heard the "chaos of clicks and sounds below" until the blue whale eventually met its fate. 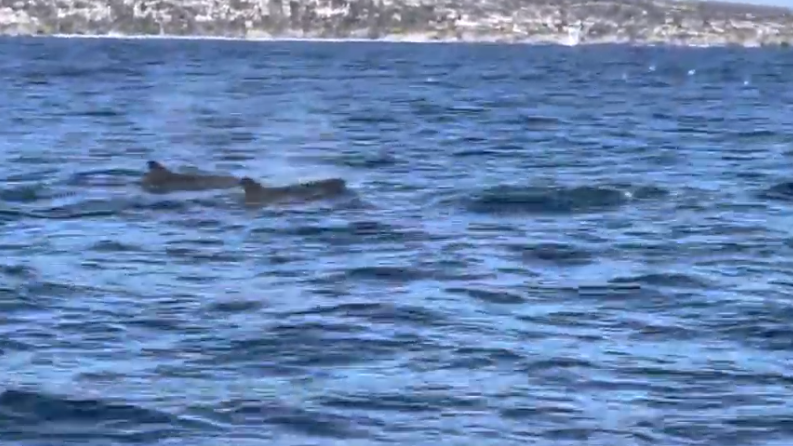 WATCH: Extremely rare video captured of a pod of 40 false killer whales off the coast of Newport Beach

"A bubble of blood rose to the surface like a bursting red balloon," she recalled. "We saw some blubber, only one hunk of flesh, and it was gone."

This event marks the third time Naturaliste Charters has recorded orcas taking down a blue whale.