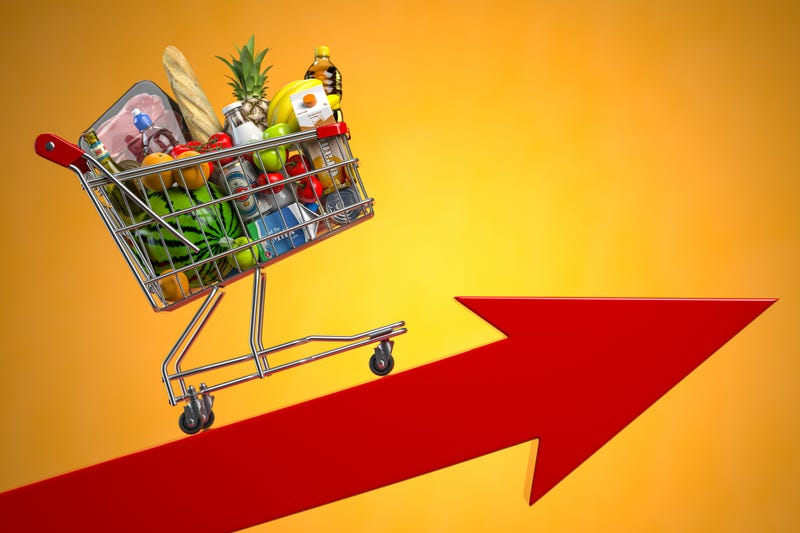 You may have noticed that your dollar isn’t stretching as far as it used to these days. Inflation in the U.S. has climbed to an uncommon 6.2%, meaning the price of the things you buy has almost universally gone up across the board. And Guy Williams, president of Gulf Coast Bank & Trust, told WWL Radio that unless you’ve gotten a raise recently, that more than likely means sacrifices are being made.

“We all make substitutions when prices get high,” Williams said on the Newell Normand Show. “But at some point, you realize the pressure is really on, and suddenly beef is off the menu. Like, OK we’re going to have to switch to chicken. And at some point, that’s too expensive as well. And in a period of high inflation, people start making a lot of substitutions, and they realize their standard of living is worse than it used to be.

“They just can’t do the things they used to do. They can’t go out to eat as often. We’re a restaurant culture in New Orleans. Restaurant meals are more expensive than they used to be.”

“I have a good friend that works in the industry,” Williams said anecdotally. “The problem is things like chicken wings that they sell a lot of are twice as high as they were a year ago. So you’ve got to bump the price of wings. And we’re not talking high-end dining. That’s just normal food.”

So the question is how did we get here, and why is it such a shock to the financial system?

Williams started with the second question.

“The United States, after a struggle for really most of my lifetime, became energy-independent,” Williams began. “So we were not dependent on the Middle East for oil and gas. Prices came down because of the shale revolution. Agriculture got more efficient because of better harvesting technology.
And just lots of things worked.

“Our inflation was actually below the Fed’s target of 2% for a number of years. So what was happening is the economy was growing smoothly.
Supply was increasing at a normal level, and everything was working. We had these decades of sort of calm. And people look back and say that was the ‘Goldilocks economy’ – not too hot and not too cold.”

As for how this happened, Williams said the catalyst for the shift into a much less stable state of being was the worldwide COVID pandemic that put a halt on the global economy with manufacturing the world over grinding to a stop.

Then just as science stepped in with treatments and vaccines for the virus, the government pumped its own treatment into the economy in the form of stimulus checks.

Williams said though that because global manufacturing was still at a standstill, there was very little to spend all that newfound cash on.

“The consumer is looking around and saying, wait a minute. I’m in trouble,” Williams said. “My salary is not going up, and everything I buy is more expensive,” Williams said. “So [at that point] we’re beginning to see inflation increase.”

Williams said the government’s dirty secret about inflation increases is that they tend to be in favor of it because if wages go up to match, workers get pushed into higher income tax brackets and the government gets more money from taxes. But he said there is a limit when the dissatisfaction of the citizenry becomes more palpable.

So the good news is that, with levels this high and mid-term elections coming around in less than a year, there is governmental motivation to rein things back in.

“We may be pushing [inflation] too high right now because what’s happening is consumer sentiment has really turned negative. Right now the consumer sentiment is the worst it’s been since 2012. The two low periods before this were 2008 during the financial crisis and 2012, and that does worry politicians because when consumers are unhappy, they tend to vote out whoever’s in office.”