By Tim Jimenez, KYW Newsradio and The Associated Press

PHILADELPHIA (KYW Newsradio) — Juneteenth, commemorating the end of slavery in the United States, has been an official holiday in Pennsylvania since 2019. Juneteenth events will form the backbone of Philadelphia's celebration of independence this summer. And with President Joe Biden's signature on Thursday afternoon, it will become the nation's 12th federal holiday.

Congress passed a bill on Wednesday that would make June 19 a federal holiday. The House voted 415-14 to establish the date as Juneteenth National Independence Day. The Senate passed the bill the day prior under unanimous consent agreement.

"While millions of Americans already celebrate Juneteenth and use the day to reflect on our collective past and future, this is an important step to formally commemorate a crucial part of our culture and history that, for too long, has been canceled," said Congresswoman Mary Gay Scanlon, who represents parts of Delaware County and Southwest Philadelphia in Pennsylvania’s 5th district.

"I introduced this to make Juneteenth a federal holiday to commemorate the end of chattel slavery, America’s original sin," Jackson Lee said, standing next to a large poster of a Black man whose back was severely scarred from whipping.

On June 19, 1865, Union soldiers traveled to Galveston, Texas, to bring word that slavery had been abolished. Black people were still enslaved in Texas months after the Confederacy surrendered, and more than two years after the Emancipation Proclamation freed slaves in the Southern states.

Juneteenth is the first new federal holiday since Martin Luther King Jr. Day was created in 1983. June 19 is already recognized as a holiday in 47 states and Washington, D.C. 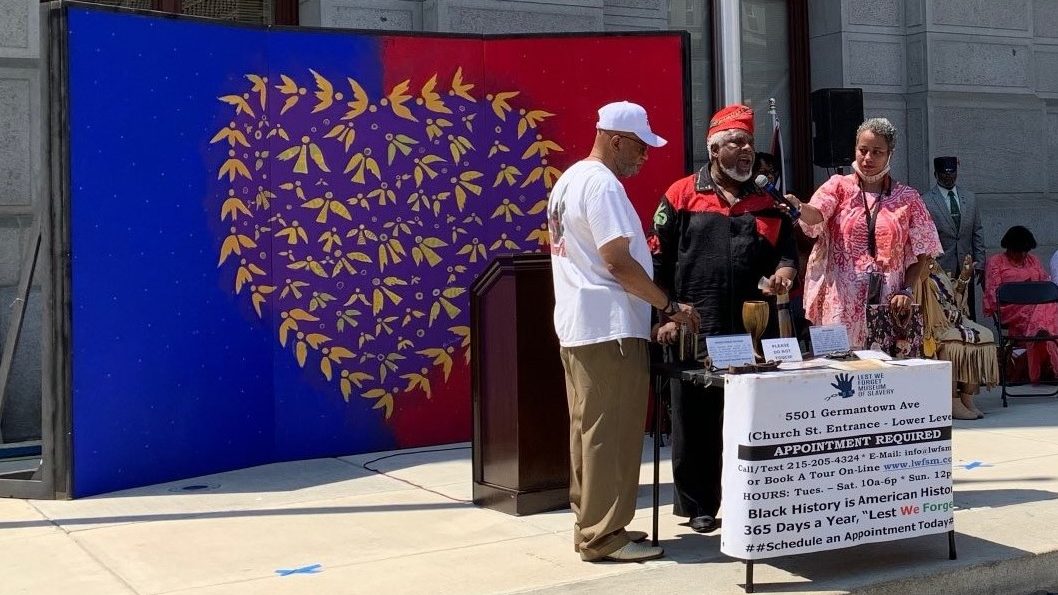 “Our federal holidays are purposely few in number and recognize the most important milestones," said Rep. Carolyn Maloney, D-N.Y. “I cannot think of a more important milestone to commemorate than the end of slavery in the United States."

Biden, who returned to the United States on Wednesday night after an eight-day overseas trip, is scheduled to sign the bill into law and speak at the White House along with Vice President Kamala Harris.

The vote comes as lawmakers struggle to overcome divisions on police reform legislation following the killing of George Floyd by police and as Republican state legislators push what experts say is an unprecedented number of bills aimed at restricting access to the ballot box. While Republicans say the goal is to prevent voter fraud, Democrats contend that the measures are aimed at undermining minority voting rights.

Several members of the Congressional Black Caucus took to the floor to speak in favor of the bill. Rep. Bonnie Watson Coleman, D-N.J., said she viewed Juneteenth as a commemoration rather than a celebration because it represented something that was delayed in happening.

“It also reminds me of what we don't have today," she said. “And that is full access to justice, freedom and equality. All these are often in short supply as it relates to the Black community."

Rep. Clay Higgins, R-La., said that he would vote for the bill and that he supported the establishment of a federal holiday, but he was upset that the name of the holiday included the word “independence” rather than “emancipation.”

“Why would the Democrats want to politicize this by coopting the name of our sacred holiday of Independence Day?" Higgins asked.

Rep. Brenda Lawrence, D-Mich., replied, “I want to say to my white colleagues on the other side: Getting your independence from being enslaved in a country is different from a country getting independence to rule themselves.”

She added, "We have a responsibility to teach every generation of Black and white Americans the pride of a people who have survived, endured and succeeded in these United States of America despite slavery."

The 14 votes against were all from Republicans. Rep. Matt Rosendale, R-Mont., said creating the federal holiday was an effort to celebrate “identity politics."

“Since I believe in treating everyone equally, regardless of race, and that we should be focused on what unites us rather than our differences, I will vote no," he said in a press release.