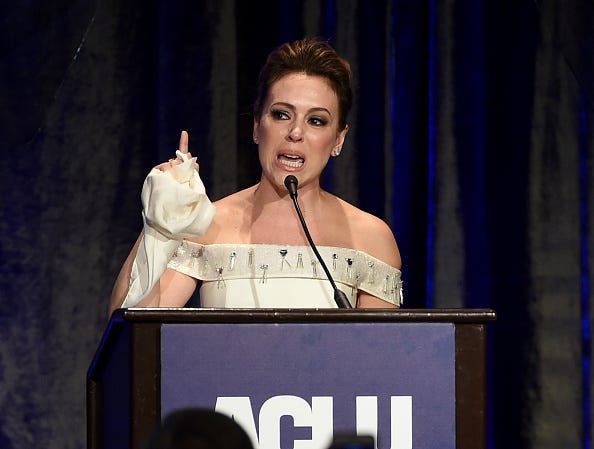 Actress and left-wing activist Alyssa Milano has gone all in for the Black Lives Matter movement called "People's Budget L.A.," which seeks to defund the Los Angeles Police Department (LAPD) by 90 percent. She also attacked the union that protects members of the LAPD.

In a Monday tweet, Milano levied an attack against the Los Angeles Police Protective League (LAPPL), calling it a "narrow special interest group" which lobbies politicians to protect the LAPD budget and pensions. Her tweet included the hashtag #ProtectPeopleNotPolice.

What is the Los Angeles Police Protective League? @LAPPL is a narrow special interest group that lobbies our politicians to protect the LAPD budget, pension + officers. But electeds need to #ProtectPeopleNotPolice. Sign the #PeoplesBudgetLA petition: https://t.co/d2h2JS6NyU

The LAPPL has been fighting against the efforts of Black Lives Matter protesters and LA Mayor Eric Garcetti to defund the department. The group also ripped Garcetti for calling police officers "killers" in a meeting with black community leaders on police budget cuts.

However, as has often been the case with the Black Lives Matter organization, the massive budget cut was not enough. The organization's Los Angeles chapter has now launched an initiative called People's Buget L.A., which calls for most of the city's police budget to be redirected into community programs and safety efforts.

Milano called on her Twitter followers to sign a petition supporting People's Budget L.A. and to join a social media campaign designed to pressure the LAPPL.

Today at 12PM we have a Twitter Storm led by Black Lives Matter Los Angeles (BLMLA) and targeting the Los Angeles Police Protective League. Please find all of the information that you need to participate in the twitter storm at: https://t.co/9AnQR08uwu. Please participate!