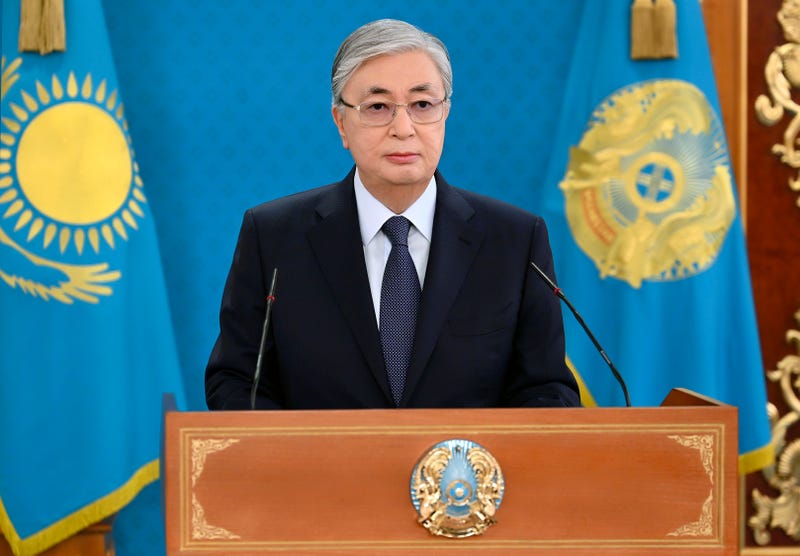 MOSCOW (AP) — Kazakhstan's leader has trumpeted ambitious economic reforms following the worst unrest in the country of 19 million in three decades. The measures are aimed at reducing the state’s deep involvement in the economy, bridging the gap between the wealthy minority and the struggling majority — and eliminating triggers for further turmoil.

Experts say the announced changes look good on paper, but question whether the new government in the energy-rich former Soviet state will implement them.

A look at the causes of discontent and the government's promised reforms:

On Jan. 2, small protests broke out in an oil city in western Kazakhstan where residents were unhappy about a sudden spike in prices for liquified gas, which is widely used as automotive fuel.

Authorities arrested thousands of people and more than 220 — mostly civilians — were killed. About a week after the protests began, order was largely restored.

WHY WERE GAS PRICES SUCH A SORE POINT?

The price of gas soared to 120 tenge ($0.27) per liter, a significant increase in the country where, according to Tokayev's own admission, half the population earns no more than 50,000 tenge ($114) a month. The spike came about as the government moved away from price controls as part of efforts to build a market economy.

Analysts say the increase came as a complete surprise.

“All these decisions were made without transparency. ... People woke up to a new gas price that was 2 1/2 times higher," said Kassymkhan Kapparov, an economist in Kazakhstan and founder of the Ekonomist.Kz think tank.

The western region of Kazakhstan where the protests started also produces oil and gas. Residents were outraged that the price increased while their salaries remained stagnant, said Rustam Burnashev of the Kazakh-German University in Almaty, an expert on regional security in Central Asia.

“They were saying, ‘Guys, we’re producing it, and now we (have to) buy it at astronomical prices?' They agree that gas prices (all over the world) grow, but in that case (they say) that ‘our salaries should too,'" Burnashev said.

HOW DID KAZAKHSTAN END UP IN THIS SITUATION?

Kazakhstan became independent when the Soviet Union collapsed in 1991. In the first post-independence years, the country saw rapid economic growth and rising prosperity. For almost three decades, it was dominated by Nursultan Nazarbayev, its last Communist Party leader at the time of independence.

The country profited from its natural resources, most notably oil. Foreign investors were welcome, money flowed into state coffers, and social spending helped keep abject poverty low. But key sectors such as mining, telecommunications and banking were dominated by state-owned companies and a few figures connected to Nazarbayev, either politically or through family ties.

As time went on, Nazarbayev increasingly monopolized the country’s politics, suppressing opposition and introducing a highly personalized form of rule as Elbasy, the Leader of the Nation. Nazarbayev resigned in 2019, but until recently remained head of the ruling Nur Otan party and chair of the Security Council. Tokayev, the chair of the upper house of parliament, was appointed president and renamed the capital of Astana to Nur-Sultan, to honor his predecessor.

WHAT ARE THE ISSUES BEHIND THE PUBLIC DISCONTENT?

Discontent among ordinary people goes way beyond gas prices. People are aware of the country’s striking level of inequality and the immense economic privilege of those around Nazarbayev, in which 162 people control more than half the country’s wealth.

Meanwhile, the average monthly wage is around 243,000 tenge, or $558, according to government statistics, although the cost of living is relatively low compared with Western countries.

A recent report by the Organized Crime and Corruption Reporting Project found that a charitable foundation created by Nazarbayev held assets worth $7.8 billion, including stakes in banking, shopping centers, logistics firms and food production.

British authorities issued “unexplained-wealth orders” to Nazarbayev’s daughter and grandson demanding they reveal where they obtained funds for three London properties worth more than 80 million pounds. A judge threw out the orders.

WHAT APPROACH IS THE CURRENT PRESIDENT TAKING?

Tokayev publicly acknowledged Kazakhstan’s rampant inequality and initially tried to quell the protests with a few concessions: He capped gas prices for 180 days, named a new Cabinet, and ousted Nazarbayev from the National Security Council.

The president outlined future reforms to “reset” the economy, remarking, “We need to define new ‘rules of play’ — fairer, more transparent and just."

Among the ambitious measures he touted are reducing the government's involvement in and oligarchs' influence on business; reforming the Samruk-Kazyna sovereign wealth fund, which owns major companies; and ensuring fair competition, a better investment climate and the integrity of private property, in part by overhauling the country's justice system.

WHAT CHANCE OF SUCCESS DO THE PROPOSED REFORMS HAVE?

Kapparov, the economist, said important questions remain about the Samruk-Kazyna fund and its companies.

“Will there be a privatization? On what scale? In which time frame?” he asked. “Will it be open to everyone, including foreign investors? These issues haven’t been mentioned.”

The inner circle's power and influence raise serious obstacles to any wide-ranging reform that would be required to privatize state companies and allow outside interests to compete in key sectors, said former World Bank official Simon Commander, now managing partner at emerging markets advisory firm Altura Partners. Tokayev's speech, while interesting, is “certainly more radical than is likely to be possible. ... Let's hope he turns out to be a genuine reformer.”

But he added: "I’m very skeptical. Their economic and political structure hems them in."

WHAT ABOUT POLITICAL REFORMS?

During his years in office, Tokayev also has promised limited political reforms, including local elections.

But the crackdown on protesters suggests authorities don't intend to allow genuine political opposition, and without political reform, economic reform is difficult to imagine.

Greeting discontent with more than 12,000 arrests “is a pretty good metric for how the regime thinks it needs to respond,” Commander said.