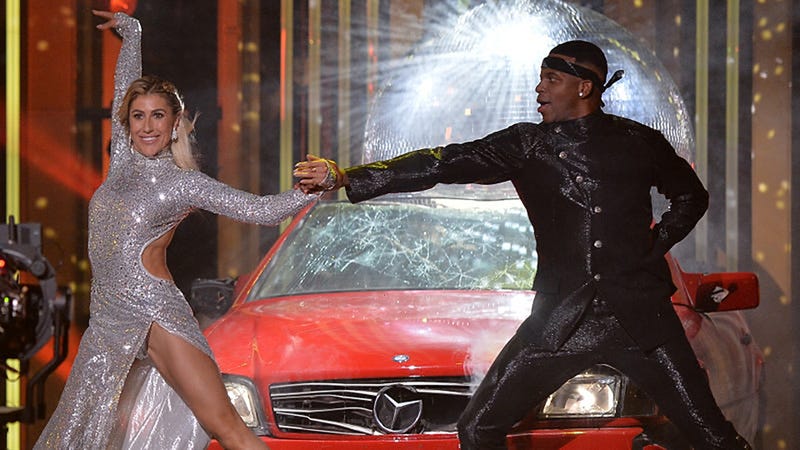 Jimmie Allen took to the ballroom floor with a sultry Rumba for the second week of competition on ABC’s Dancing with the Stars. The Country singer saw a five point improvement from his scores last week and survived elimination, making it a successful night overall.

Allen and his professional dance partner, Emma Slater, danced to Jimmie’s #1 hit, “Make Me Want To” from his album Mercury Lane.

“I feel like the song really just helped me get in the moment,” Jimmie told Audacy’s Rob + Holly when asked if it was weird to dance to his own song. “I was able to not worry about counting and just feel the song. “

Jimmie’s comfort on the dance floor was apparent as he rocked an all lavender costume that ended up open, showing off his rock-hard abs. Also on full display was Jimmie’s comfort with his professional partner, Emma. While some may think dancing a sultry dance with someone other than his wife would be awkward, Jimmie says his wife has no issues with it.

“She’s great, she understands that it’s just dance,” Jimmie said of his wife, Alexis, who is pregnant with the couple’s second child together. “I have a movie role coming up where I have to kiss a girl and she’s OK with it. I feel like when you start dating someone and you’re in entertainment and they’re not in that business, you have to be open and honest from the beginning,” he shared, while also telling Rob + Holly he had an open conversation with Alexis before agreeing to the show.

Jimmie seems to be set up for success with a solid support system as he heads into week three of the competition. Next week’s show will feature the remaining celebrities dancing to songs by Pop icon Britney Spears. While the Spears theme is sure to bring some impressive costumes, Jimmie says there’s no way he’d dance in a school girl dress — even to honor on Britney Spears.

“Yeah, I don’t do the whole dress thing. It’s not my thing,” Jimmie laughed when asked if he’s be sporting a school girl dress next week to honor Spears. “I’m more the type of guy that takes dresses off,” he laughed.

The “Best Shot” singer went on to share that he and Emma will be performing a Salsa next week and he is already hard at work on a costume. “It’s one of my favorite colors,” Jimmie said of his wardrobe for next week. “You won’t m