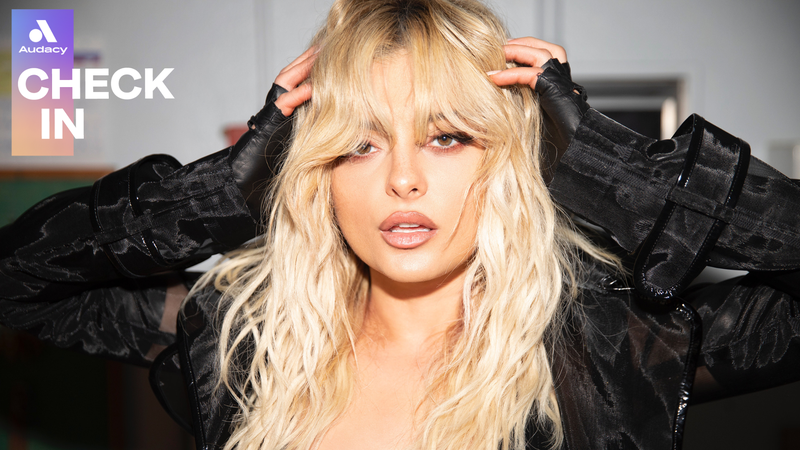 To celebrate of the continued success of her David Guetta collab "I'm Good (Blue),” Bebe Rexha checked in with Audacy’s Julia to talk all about the smash hit and more.

The track, which interpolates Eiffel 65's 1999 novelty hit "Blue (Da Ba Dee),” found its way to TikTok and well the rest is history currently climbing and topping the charts.

“I’m really grateful, and just shook and shocked,” Bebe said about the success of her single that with each passing day adds another achievement to its growing list, as Julia pointed out. “Now No.1 at Pop & Dance, it’s platinum in the US, over 1 billion worldwide, GRAMMY nom, BRIT nom.”

And to mark such momentous accomplishments, Bebe’s doing “little things that I love that make me happy,” like going out to a solo dinner, “to enjoy a nice little meal that you love and have a little drinky.” A theme she's sticking to on her latest project, but we'll get to that in a little bit.

While "I'm Good (Blue),” was released a mere five months ago, which Bebe couldn’t believe, “it feels longer,” the track was actually created 5 years ago.

Explaining how the song came about Bebe said, “I was in London and saw somehow that Guetta was in London as well.” After reaching out, Guetta informed her he was working in the studio, “so I was like cool, can I drop by?”

“So I dropped by the studio,” she continued, “he played me this remix of this beat that he made off of ‘Blue,’ and I was like ‘this is cool, let’s just write to it,” thinking nothing of it. “We weren’t like being serious about it, we were just having fun… and wrote it, and here we are.”

After cutting the track Guetta played the track at a festival, and someone who filmed it then posted it on YouTube. Which led someone else pulling it from YouTube posting it on TikTok, “and that’s where it went viral,” Bebe expressed.

Explaining the YouTube video was gradually going viral, gaining views on YouTube with each passing year, “but then it would get pulled down because it was copyright infringement,” adding, “it was kinda happening for a while.”

Putting a positive spin on the song, as the original “is about being sad,” was a natural choice. “Because when you listen to it with the beat and chords, it actually makes you feel like you wanna go party.” And working with Guetta on the feel good anthem didn’t hurt either. “Guetta’s like the king of that,” Bebe noted.

With all the crazy success that’s gone down with "I'm Good (Blue),” Julia was curious if anything has “topped this moment… as one of the craziest moments in your career?”

After mentioning “Meant to Be,” with intentions to continue talking about past events, Bebe switch gears to some exciting future plans. “There has been something, it’s on my new project, but I can’t talk about it,” Rexha revealed. “I got a really insane feature that I grew up listening to, my grandmother grew up listening to… That’s definitely a big highlight moment for me.”

While she can’t share that, Bebe did say that she’s “very excited” about the album she’s currently working on, sharing “it feels like a natural growth for me.” Going on to note, “there are dance elements, but it’s mostly Pop,” adding, “it has a little bit of a 70s vibe to it.”

“The main DNA of the project is just writing songs that I love, and that aren’t chasing anything. It’s just what feels right." Encompassing the concept of “change and accepting change,” Bebe’s goal is to reveal her growth by being more honest about things she’s gone through.

Elsewhere in the conversation, Bebe spilled some award show surprising facts, spoiler alert, “they’re really boring.” And then went on to talk about the excitement of her recent GRAMMY nomination, sharing that her mom will be her plus one to the event.

Don’t miss a moment of it. For all that and more, watch the entire interview above.

Listen to Pop Now and more on the free Audacy app