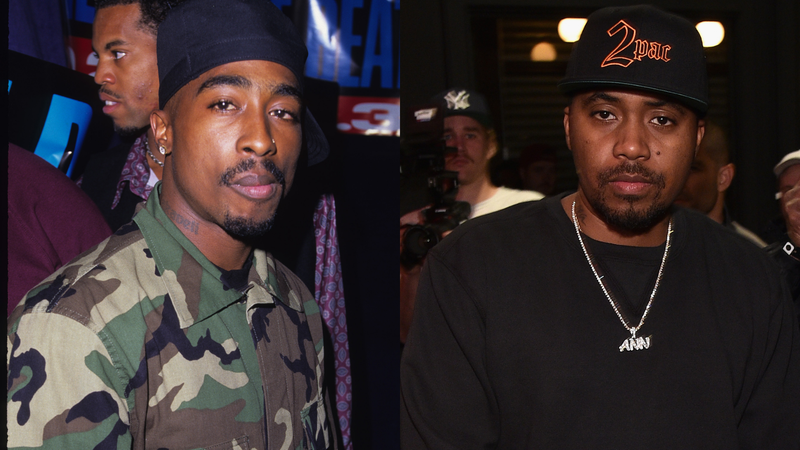 In a plot twist we couldn't have predicted, an unreleased song from Nas entitled "Real N****s" has surfaced and it's an apparent diss to Tupac.

Though the two rappers settled their differences prior to Pac's death in 1996, "Real N****s" takes a shot at Pac midway through. Nas raps, "From tube-socks in Timbs to blue rocks and Benz / Who got the ends, the type of n**** 2Pac pretends / To all n****s who shine, guess who got revenge / I won’t showboat, my flow choke you."

The track continues to attack the West Coast legend as Nas expressed, "And if it don’t the 44 will smoke you, left ya’ seed reminiscing on ya’ / Emcees I’m p***ing on ya’ shine ’cause my chips are longer / It’s gremlins I’m siccing on ya, shot, ya’ dodging / But Esco could rock the whole f****** Garden."

Most notably, Pac called out the Queens native on "Against All Odds"—"This little n**** named Nas think he live like me / Talkin’ bout he left the hospital, took five like me / You live in fantasies, n****, I reject your deposit," he rapped. It didn't end there, though.

Pac dynamically dubbed Nas a "caricature" for biting off his lifestyle and persona. He barked, "Lord listen to me, God don’t like ugly, It Was Written / Hey Nas, your whole damn style is bitten / You heard my melody, read about my life in the papers / All my run-in with authorities, felonious capers / Now you want to live my life, so what’s a ‘chazzer’ Nas? / N***** that don’t rhyme right / You’ve seen too many movies / Load ’em up against the wall, close his eyes / Since you lie, you die, goodbye / Let the real life n***** hear the truth from me / What would you do if you was me."

Their initial beef began over a misunderstanding stemming from Nas' "The Message," where he rapped about an incident eerily similar to the infamous shooting at Quad Studios— Pac was shot five times during that ordeal. Check out the full newly surfaced track below.

Want more from some Hip-Hop pioneers? Check out Audacy's exclusive station from our own Ed Lover! Ed Lover's Timeless Throwbacks is an ode to all the classic Hip-Hop greats including Pac, The Notorious B.I.G., Jay-Z and more.