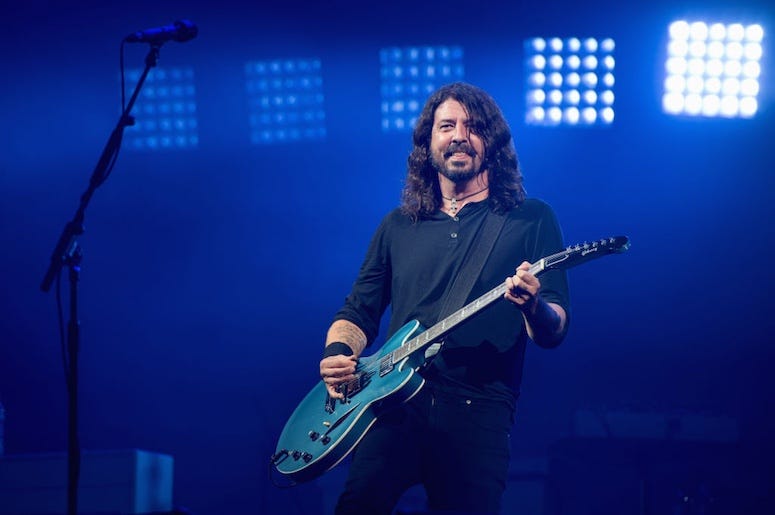 The Foo Fighters frontman is celebrating his 52nd birthday on January 14 and is showing no signs of slowing down. In fact, he’s been as busy as ever with the Foo Fighters getting set to release their tenth studio album Medicine at Midnight on February 5.

Being a rock star has always carried a certain aura of coolness to it, but Dave Grohl takes it to another level.

In celebration of Dave’s 52nd birthday, let’s take a look at ten times he proved he’s the coolest rock star in the business.

1 He took part in a drum battle with 10-year-old superfan Nandi Bushell, but lost

It was the most epic drum battle of 2020, if not all time. It all started in August when Nandi posted a cover of her drumming to “Everlong” and challenged Grohl to battle. Dave accepted and it resulted in a fierce competition. Grohl finally conceded defeat in November, thereby making Nandi Bushell the glorious winner.

2 He’ll welcome you up on stage, as long as you’ve got the chops.

It was not uncommon for Dave to welcome fans up to the stage at Foo Fighters concerts. Take this example where a fan in a wheelchair and a girl who was blowing bubbles caught his attention and were promptly invited up on stage.

3 David Bowie once told him to “f*** off,” which he took as a compliment

It’s a long story, but it’s well worth your time to read. Dave received a pitch to write a song for a movie in 2013 and asked David Bowie if he would sing. Bowie declined, but told Grohl he’d love to collaborate one day. After Dave emailed Bowie thanking him for listening, the Thin White Duke sent back in email telling Grohl to “f*** off,” which Dave says “even that was an honor.”

Back in 2019, the Foo Fighters were performing a small, private show in Las Vegas when Grohl decided he was thirsty in the middle of a guitar solo. Without missing a note, he climbed down from the stage and got a Bud Light from the bar, which he promptly chugged. He took a tumble making his way back up to the stage, but continued to rock unscathed.

5 The Festival of Tasty Licks

A new Hanukkah tradition was born in 2020 when Dave and Foo Fighters producer Greg Kurstin teamed up to treat fans to eight nights of covers from Jewish artists. From Beastie Boys, to Drake, to Peaches, and more, it brought plenty of joy this holiday season.

6 The most epic stage prop in rock history

A broken leg hurts like hell, but it won’t stop Grohl from rocking. Grohl broke his leg in the middle of a concert back in 2015 and decided to finish out the show before being treated. In order to continue on with the Foo Fighters tour, Grohl had an epic rock throne built so he would be able to take the stage night after night.