Anthony Rizzo's team isn't making any bones about his hope to remain with the New York Yankees.

Bob Klapisch of NJ.com spoke to an unnamed member of Rizzo's family, who said that the three-time All-Star is "quite eager" to re-sign with the Yankees this offseason.

This past March, Ken Rosenthal and Patrick Mooney of The Athletic reported that Rizzo turned down a four-year/$70 million extension from the Cubs, seen by most as a pretty underwhelming offer.

What Rizzo's market ends up being will be interesting. Reigning National League MVP Freddie Freeman is the top available first baseman in free agency this offseason, with the thought being that he'll likely top Paul Goldschmidt's five-year/$130 million extension with the St. Louis Cardinals. It would be pretty shocking if that deal comes with anyone other than the National League Champion Braves, the only team that Freeman has ever played for.

If Freeman does indeed re-sign with the Braves, Rizzo could be in position to capitalize on first base-needy teams that weren't able to land the top available option. That will be especially true if Brandon Belt also re-signs with the San Francisco Giants.

Should the Yankees re-sign Rizzo, Brian Cashman will need to be careful about the length of the new pact. While DJ LeMahieu saw the bulk of his time at second base in 2021, there may come a day that the 33-year-old -- who has a full no-trade clause and is owed $75 million over the next five seasons -- needs to play first base on a regular basis. Giancarlo Stanton is seemingly entrenched at DH through the 2027 season, when his gigantic contract concludes. 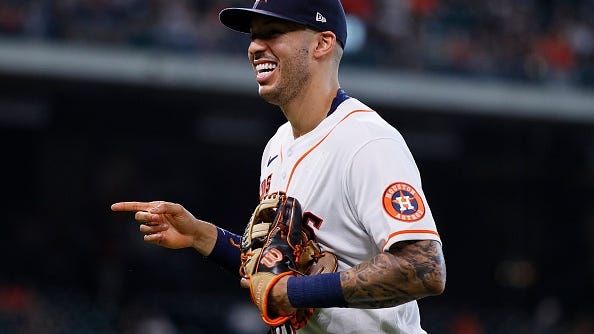