The Houston Astros — deservingly, to some — have received their fair share of rough treatment from fans on the road this season. We've seen trash can signs, inflatable trash cans, strongly worded posters and much more. We've heard even worse things, ranging from generally hateful chants to taunts directed at individual players. Even if this was to be expected, it's still probably a lot to handle. 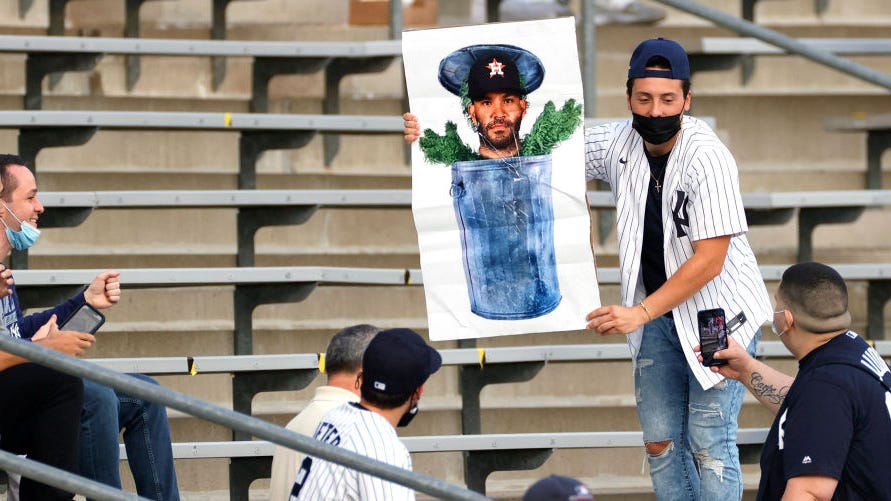 Yankees fans were on another level with anti-Astros chants: 'F–k Altuve!'

For one series in July, however, it seems like the Astros are looking to be the team doing the taunting. It may have been intended. It may have been completely coincidental. But a noticeable entry on the Astros' July calendar shows an interestingly-timed giveaway promo, one that lasts all throughout a three-game series against the New York Yankees, with some cool goodies. Reminder: the Yankees were the team that fell to Houston in the 2019 ALCS.

Why am I reminding you of that, and what's the giveaway, exactly, when the Yankees come to town from July 9 to July 11? As Ben DuBose pointed out, the promotions are a 2019 ALCS trophy giveaway in the first game, a 2019 ALCS ring giveaway for Game 2, and a Jose Altuve replica jersey for Game 3.

This is pretty epic trolling and embracing the hate by the Stros. Respect. https://t.co/h1nrwIiN4H

If it's just a coincidence, so be it. But pretty much all of Astros Twitter seems to be on the same page that they're going with a little bit of trolling when the Yanks come to town, and were pretty sure that Astros fans in attendance will be happy to brandish their new wares at whichever unfortunate New York fans make the trip to Minute Maid Park that weekend.

Later in the month, you can enjoy Star Wars Night and some bobbleheads during the Lone Star Series between the Astros and the visiting Texas Rangers.