Of all the things that could possibly bring stress to a high profile sports agent, a wet first base isn’t a likely suspect. But when Kris Bryant slipped on the bag while hustling to beat out a double play and suffered a potentially season-ending injury, perhaps no one was as outraged as Bryant’s agent, Scott Boras, who joined Jon Heyman and Josh Lewin on this week’s episode of “Big Time Baseball.”

Scott Boras, ranked by Forbes as the No. 1 sports agent in the world for four consecutive years, represents a massive list of impressive clientele, several of which he discussed on the podcast. But the story that stole the show was Boras’s frustration with the unconcerned approach of Major League Baseball to certain issues regarding player safety.

“It substantially hurt Bryce Harper, may have cost him an MVP and cost him nearly a month, and they’ve done thing. They have done nothing to address this issue. Do we have a grounds crew when it rains? Do we have someone to clean the bag every half inning? Do we have an umpire examine the bag? What resources and what alternatives and what resolution have we made to address this subject?

“If the health and safety and the integrity of what we want these athletes to do isn’t preserved, it just draws to the fact that the focus of what is a priority is certainly not safety... We’re very focused on a lot of other things about the timing of the game and things of that nature and I think we’ve abused the process when we have seen this happen twice.”

Co-host Josh Lewin questioned Boras on whether or not he thinks the timing of the game and changes to the pace of play is all bad, and Boras noted that there are other developments related to this trend that are damaging player safety.

“The consequences of having openers and what it does to injure players and what it’s going to do, the pulling of young arms to have them throw in the bullpen because we are now lessening the amount of time we give to starters… what the consequences of that are going to be are on our arms of the future,” Boras said. “None of that is discussed… For pitchers that are 25 and under there used to be maybe 30 or so back in 2008-2009… that were starting 25 or more games.

“Now we have 20, we have far [fewer] players that are getting 25 games started that are young because they’re not durable. Their development has been cut short, they’re brought to the big leagues to throw for shorter innings and yet they bring them back and expect them to be starters… We let the analytic community deal with a performance dynamic that they believe is better in the current game, [but] not included in that algorithm is the longevity and the durability of those very arms that provide it.”

Boras’s opinions on this topic are well-grounded. The passionate agent told Heyman and Lewin of his sports fitness institute where he spends millions of dollars training and monitoring player performance with an independent training staff. While he understands the importance of “irregularity of sight” in a player’s performance -- in other words, the constant changing of pitchers for any given hitter so that they can’t get comfortable with their opponent -- Boras also knows that this practice is a detriment to a pitcher’s long-term durability, something he doesn’t wish on any pitcher, client or not.

Heyman and Lewin additionally asked about several of Boras’s clients and the importance of contract opt-outs, and he provided some great insight:

“When [Bryce] Harper went to Philadelphia went to Philadelphia I think Anthony held the baton of being the core of the Washington Nationals lineup, and he has a great relationship with Juan Soto… certainly the combination of those two with [Trea] Turner has really given the Nationals a lineup that’s made them at the top tier of the National League.

“Certainly we know the Nats have a strong interest in Anthony and they’ve expressed that to us and I’m sure that’s something we’ll discuss when the season has ended for the Nationals.”

“...[Mike Rizzo] expressed, I think, infatuation and desire to sign Juan and I believe he mentioned some numbers in the near $200 million area… Those are things that we kind of leave in the space of the offseason before we ever begin discussion.”

“When he was a youth player he was literally one of the greatest hitters of any young player in the game, certainly in youth baseball at the time… when we watched him play when he was 16-17 he was really one of the true great hitters in an outstanding draft class. Getting into a lineup where people really can’t work around him and have to throw to him... they also have situational pressure where the competitiveness of the team is in a position to give him situations with runners on base… it has allowed for the exhibition of his bat speed, of his ability to stay inside the ball… he’s really just taken advantage of that situation to illustrate his skills.

“We’re all real excited and pleased that Nick had the opportunity to play in Chicago and certainly I think everyone understands now what type of ballplayer Nick Castellanos is.” 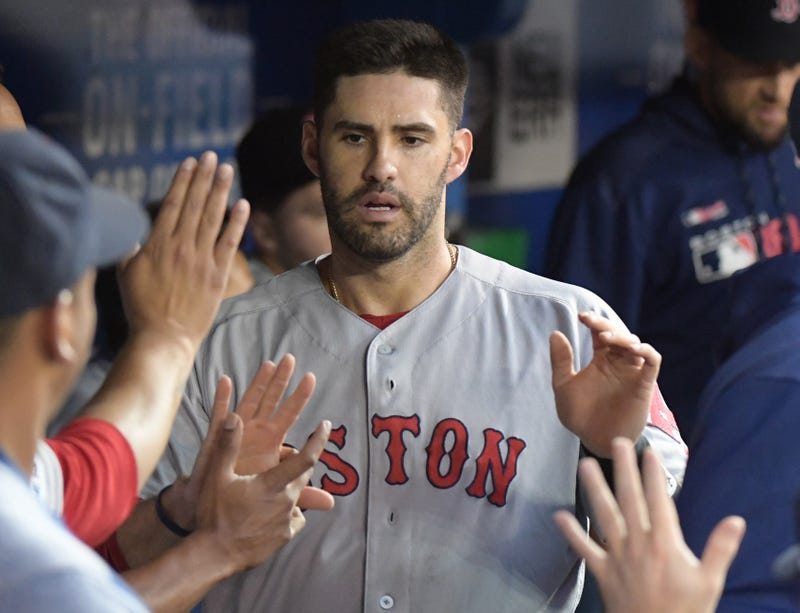 J.D. Martinez (and whether his role as a DH affects his value)

“When you go back and look at the last three years, this is one of the greatest hitters in Major League Baseball. This is a person who is a foundational leader of a team, this is a person who plays 40-50 games in the outfield. None of those categories have anything to do with being a DH.

“There are only three or four players in the game that have had a 1.000 OPS over the last three years and they not only hit for power but for average, they’re on base, they are literally a core… that is the vision of J.D. Martinez that I believe all teams have.

“I know my clients Jackie Bradley [Jr.] or Xander Bogaerts… have been dramatically benefitted by what J.D. Martinez does and what information he provides and the intensity he brings to the players… You just have difficulty in the game finding people that you know are one of the top five hitters in the game so I don’t think teams would in any way view J.D. Martinez as a DH.”

“I think that when I created the opt out when I was doing A-Rod’s contract I had to build a bridge between a great young player’s performance in his 20s and also knowing that when he signed a 10-year contract there was going to be market change [and] revenue increases, and I had to have a bridge to get to an evaluative period in the market yet get the athlete the years of contract and guarantee he deserved at inception [of the contract].

“The benefit of it to the player is that he can take and examine [his] performance, the marketplace, the need, the club he plays for… he can really look at all of those choices and ask ‘is this a place I want to continue [playing in],’ and then it provides an opportunity for renegotiation with that particular team prior to the opt out.”

You can listen and subscribe to “Big Time Baseball” on iTunes among other streaming platforms.