In the span of a few months, Vanderbilt prodigy Kumar Rocker went from the likely No. 1 pick in this year’s draft to the equivalent of baseball purgatory, left to contemplate his MLB future after failing to strike a deal with the Mets ahead of Sunday’s deadline. Despite concern over his pitching elbow, Rocker’s agent, Scott Boras, insists the Most Outstanding Player of the 2019 College World Series is healthy and ready to pitch. The question is … where?

After being passed on by the Mets, who reneged on their verbal agreement to pay the right-hander a $6-million signing bonus (which would have been well above his $4.7-million slot value), Rocker should, at least in theory, be eligible for free agency. However, due to stipulations in MLB’s collective bargaining agreement, that’s not the case.

Rocker’s choices are fairly limited. The 21-year-old could return to school for his senior season at Vanderbilt and—thanks to the NCAA’s new NIL policy allowing student-athletes to profit off their name, image and likeness—probably make some good dough in the process. The more likely scenario, however, is Rocker spending the remainder of 2021 training on his own for next year’s draft or beginning his professional career in independent ball.

Obviously, Rocker's preference would be to sign with a team of his choosing as quickly as possible, but unfortunately, that avenue isn't available to him. Baseball expert Buster Olney of ESPN blames that on flawed draft rules that needs to be addressed in the next CBA, calling MLB’s current system a “joke.”

MLB and the Players Association are jointly responsible for this, but how absurd is it that a team can draft a player and choose not to sign him, as with Mets and Kumar Rocker -- and the player can't sign anywhere under the MLB umbrella? What a joke.

Olney presents an interesting argument, opining that unsigned picks should be allowed to test the market in the absence of a fair offer (80 percent of slot value) from the team that drafted them.

The adjustment that MLB and the Players Association should make in next CBA for draftees like Kumar Rocker is obvious: If a team declines to make at least a minimum offer (say 80% of prescribed slot value), then the player should become a free agent, able to sign with any team.

In response to criticism over how the team handled the Rocker situation, Mets owner Steve Cohen called draft picks an “investment” while implying Rocker didn’t offer the kind of “return” he was looking for. Though not dissimilar to strategies employed by small-market clubs like Tampa Bay and Oakland (both ruthless in their approach to compensating players), Cohen’s remarks were received poorly with many citing the Mets’ tactics as a textbook example of “player suppression.”

A reminder from a current MLB owner: the draft suppresses player salaries to a huge extent by taking away nearly all of the flexibility & leverage amateurs might otherwise possess. In fact, some would argue that’s its main purpose. https://t.co/i4rmRzxoSm

Hi Steven. It's clear your team prioritized having the 11th pick next year over signing Kumar Rocker. I'm sure you had your reasons, but do you think he should have to sit out a year as a result? Would you support making Rocker a free agent? https://t.co/xWweUZMDml

Steve Cohen is going to take Rocker's $6 million and buy another guady piece of artwork and the team will never sniff a cent of it.

“I learned how much of a Lion at the circus we all really are” pic.twitter.com/YbI3BM0hIi

This type of language — treating baseball players solely as financial assets — is symptomatic of so many of the trust problems between the owners and the players right now https://t.co/82lFIRWqkT

Education time - people are not investments. They are humans.
We, on the other hand, would like to formally offer @KumarRocker a spot on our squad, to help a young man grow in the game of baseball. https://t.co/Lc7tKmcLiw

As noted by Jim Callis of MLB Pipeline, of the 312 players chosen in the first 10 rounds of last month’s draft, only three were unsigned—Rocker, Red Sox second-round pick Jud Fabian and fourth-rounder Alex Ulhoa, who couldn’t reach a deal with Houston before Sunday’s deadline. For failing to sign Rocker, New York will be awarded a compensatory first-round pick (11th overall) in 2022. 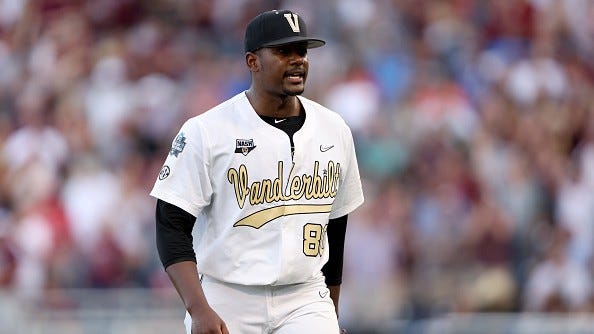