It hasn't even been a calendar year since the Colorado Rockies inked superstar third baseman Nolan Arenado to an eight-year/$260 million extension. But teams are already calling to inquire on the availability of the five-time All-Star.

According to ESPN's Jeff Passan, "multiple teams" have reached out to the Rockies regarding the 28-year-old third baseman. Passan says that there wasn't any traction in those conversations, but that likely won't keep teams from continuing to check in to see whether they could potentially pry Arenado away from the Rockies.

Remember, Arenado, who once publicly voiced his frustrations with the Rockies' inability to compete, can opt-out of his deal after 2021. The Rockies won just 71 games in 2019, finishing 35 games behind the Los Angeles Dodgers in the National League West. In addition to the Dodgers, there's a real feeling around baseball that the San Diego Padres could take a major step forward in 2020 as well, further complicating the Rockies' path to the postseason for the foreseeable future.

Even if the Rockies aren't ready to seriously weigh offers right now, they may reach a point where they are. So it doesn't hurt to open the lines of communication.

The possibility also exists that a suitor becomes so enamored with Arenado that they are willing to blow the Rockies away with an offer that forces them to seriously consider trading their franchise icon. After all, Arenado is one of the greatest fielding third basemen in baseball history, and has hit over 35 home runs and driven in over 100 runs in five consecutive seasons. Adding him could help push a contender over the top.

With that in mind, here's five teams that should aggressively inquire on Arenado, and could potentially match up in a trade: 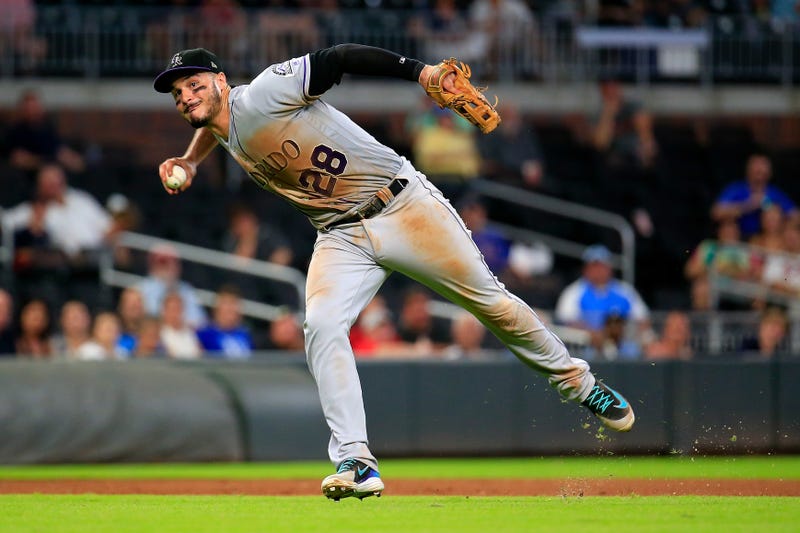 Whether the Braves would be willing to take on the $234 million remaining on Nolan Arenado's contract is a legitimate discussion to have. But they have the prospect capital to get a deal done.

The Braves have a bevy of young starters at or near the major league level that could be intriguing to the Rockies in a trade; Ian Anderson, Kyle Wright, Bryse Wilson and Kyle Muller all make sense as possible options to be part of a deal.

Additionally, the Braves have two outfielding prospects that are among the top 25 prospects in all of baseball. Christian Pache is the No. 11 prospect in all of baseball, while Drew Waters is the the 23rd highest-rated prospect. With the Braves able to control Ronald Acuna Jr. through 2028 as part of his long-term extension, you wonder if the Braves would be willing to part with Waters for an opportunity like this.

Already this offseason, the Braves have re-signed reliever Chris Martin, signed Will Smith - arguably the best reliever on the market - and inked former World Series MVP Cole Hamels to a one-year/$18 million deal. It feels entirely possible they'll lose Josh Donaldson in free agency, which would open up a hole at third base. Adding Arenado in a trade would fill that hole, and potentially make the Braves the favorites to win the National League in 2020. 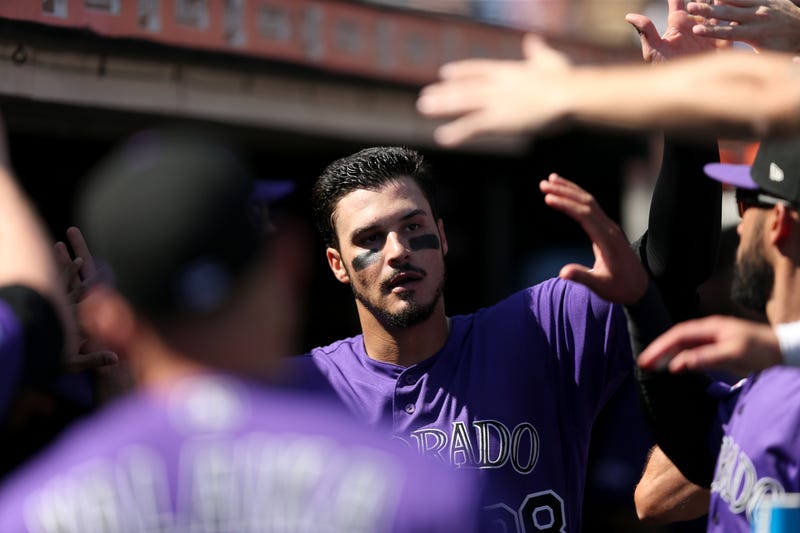 The Cardinals would be an interesting match for Nolan Arenado. Photo credit (Ezra Shaw/Getty Images)

While their stint in the NLCS was short-lived, don't forget that the Cardinals were a series away from playing in the World Series in 2019.

In an exercise meant to have some fun, we pondered about the Cardinals trying to pry Charlie Blackmon from the Colorado Rockies. Frankly, though, Blackmon would be a much riskier investment than Arenado, because he's declined rather rapidly defensively the past two seasons, while Arenado has won three consecutive National League Platinum Glove Awards.

The Cardinals, in theory, could at least get the Rockies' attention with a trade offer. 24-year-old third baseman Tommy Edman slashed .304/.350/.500 with 11 home runs, 36 RBIs and a 3.2 fWAR in just 92 games in a rather surprising rookie season. 2018 first-round pick Nolan Gorman, though a ways off from reaching the major leagues, is a third baseman that is currently the No. 38 prospect in all of baseball. The organization's top overall prospect - outfielder Dylan Carlson - may be off the table, but catcher Andrew Knizner, third baseman Elehuris Montero and LHP Zack Thompson are among the other pieces in the Cardinals' farm system that could intrigue the Rockies.

Again, the Cardinals would face the uphill battle of trying to get the Rockies to part with a player that they signed to an eight-year deal less than 12 months ago. But if they were able to clear that hurdle, they could put together an interesting offer for Arenado. 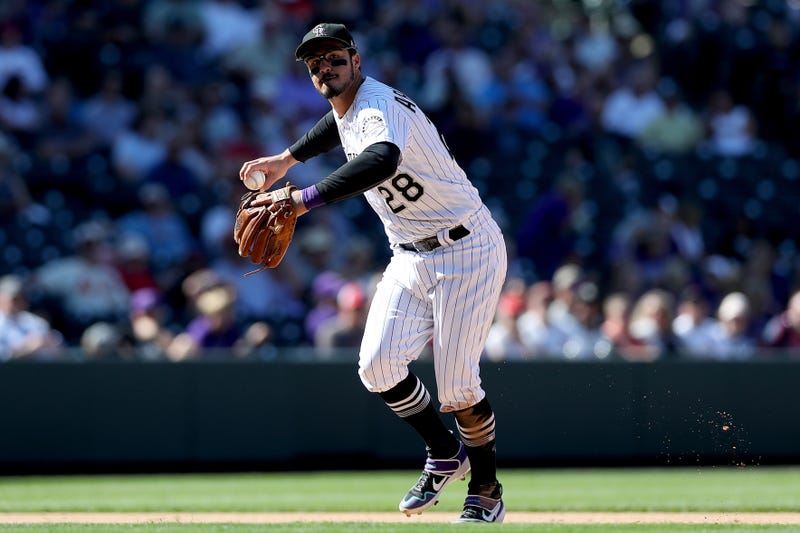 There's a lot to be excited about in Arlington. The Rangers will move into Globe Life Park in 2020. They unveiled their Nike jerseys earlier this week, which featured a new powder blue jersey that will be worn on Sunday home games.

As far as the team that will don those powder blue jerseys at Globe Life Park, there's some work to be done.

In a division that produced two playoff teams - the Houston Astros and Oakland Athletics - the Rangers went 78-84. In addition to the two postseason teams, the Los Angeles Angels expect to take a major step forward in 2020, and are seen as one of the favorites to land RHP Gerrit Cole in free agency.

In what figures to be a highly-competitive American League West, the Rangers have been connected to the top two free-agent options at third base, Anthony Rendon and Josh Donaldson. The guess here is that they'll land one of the two.

If they don't, though, making an inquiry on Arenado would be an interesting pivot for an organization that became accustomed to Hall of Fame caliber play at the hot corner during Adrian Beltre's eight seasons with the team.

The Rangers' top-rated prospect is third baseman Josh Jung, the No. 55 prospect in the sport. Whether now is the time for the Rangers to be attempting to cash in their top prospects - and whether they could build a strong enough package around Jung - remains to be seen. But the Rangers have strong starting pitching, and with the addition of Arenado, they could theoretically be competitive in the second half of 2020. 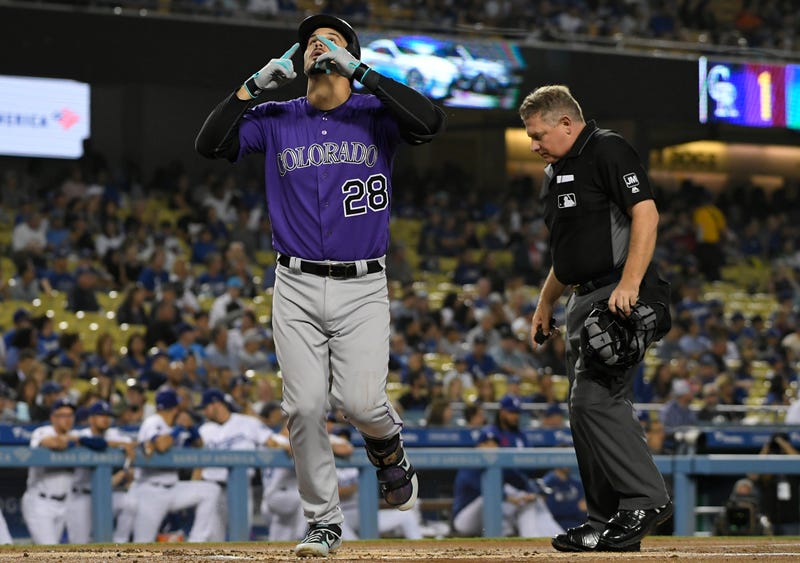 Even if unlikely, the Dodgers should check in on Nolan Arenado. Photo credit (John McCoy/Getty Images)

Jon Morosi of MLB.com reported earlier this offseason that the Dodgers Rockies "are expected" to pursue a trade for Cleveland Indians' star shortstop Francisco Lindor this offseason. They met with free agents Anthony Rendon and Stephen Strasburg earlier this week, per Jorge Castillo of The Los Angeles Times. They've already met with Gerrit Cole as well, according to Joel Sherman of The New York Post.

So after a 106-win season culminated in an extremely disappointing exit in the NLDS, the Dodgers are casting a wide net as they look to add another superstar to help them to win their first World Series title since 1988.

Perhaps they'll land their star in free agency. If not, why not place a call? They'll almost certainly be told no, but it doesn't hurt to try. For as much success as they had at the major league level in the 2010s, the Dodgers have continued to develop talent extremely well. Catcher Keibert Ruiz, RHP Josiah Gray and shortstop Jeter Downs, all of whom are top 100 prospects, could make an interesting trade package.

The guess here is the Rockies would have to feel floored by an offer for Arenado to move him. That type of offer would probably have to include at least one of middle infielder Gavin Lux, the No. 2 prospect in baseball, and/or RHP Dustin May, the No. 34 overall prospect in baseball. At that point in the discussion, the Dodgers may hang up.

Ultimately, it's very difficult to imagine such a trade coming together, or talks even gaining traction between the two teams. It would be hard enough for the Rockies to sell moving Arenado anywhere, let alone the Dodgers. But stranger things have happened, and it would behoove the Dodgers to at least place the phone call. The worst thing that could happen is they're told no.