By homering in his first at-bat back from paternity leave Tuesday, Mike Trout likely signaled that he's unlikely to relinquish the title as the best player in the sport. However, he may have some competition in the form of New York Yankees' right fielder Aaron Judge.

Judge, now 28, saw his streak of five consecutive games with a home run snapped in a Monday night victory over the Philadelphia Phillies, but still went 2-4. 35 at-bats is a small sample size, but Judge is hitting .314 and already has six home runs and 14 RBIs in 2020.

After two injury-riddled seasons, Judge appears as though he may be back in the form he was in his rookie season of 2016, when he slugged 52 home runs, en route to winning the American League Rookie of the Year and finishing runner up to Jose Altuve for league MVP.

Not only has Judge had a hot start to the season, but Giancarlo Stanton launched two tape-measure home runs in the team's opening weekend series against the Washington Nationals. DJ LeMahieu is hitting .412 after a bout with COVID-19 earlier this summer. Oh, and offseason signee Gerrit Cole has more than held up his end of the bargain thus far, as he's 3-0 with a 2.55 ERA.

If Aaron Boone's squad aren't the World Series favorites, they're pretty damn close. Here's how the Yankees compare to rest of the league in our latest RADIO.COM Sports MLB Power Rankings: 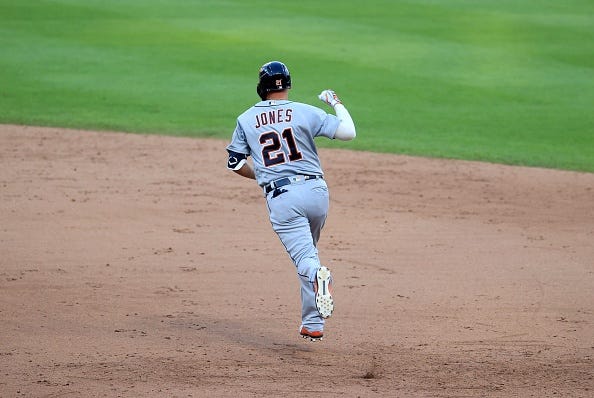 JaCoby Jones is off to a hot start for the Tigers. Photo credit (Andy Lyons/Getty Images)

Even if It Isn’t Sustainable, Tigers & Orioles Off to Better Starts Than Expected

The Tigers and Orioles will enter Wednesday's action with a combined -18 run differential. Chances are the the 5-4 start that the Orioles are off to, and the 5-5 one in Detroit aren't sustainable. However, for the two teams most thought entered the season with the worst rosters in the sport, this start hasn't been half bad. Tigers' center fielder JaCoby Jones has been one of the pleasant surprises of the 2020 season thus far, as he's slashing a crisp .379/.414/.793 with three home runs and seven RBIs. Meanwhile, second basemen Hanser Alberto and third basemen Rio Ruiz have been key in the Orioles getting out of the gate at a respectable clip. Chances are both teams will finish among the five worst records in 2020, but both have had encouraging starts. 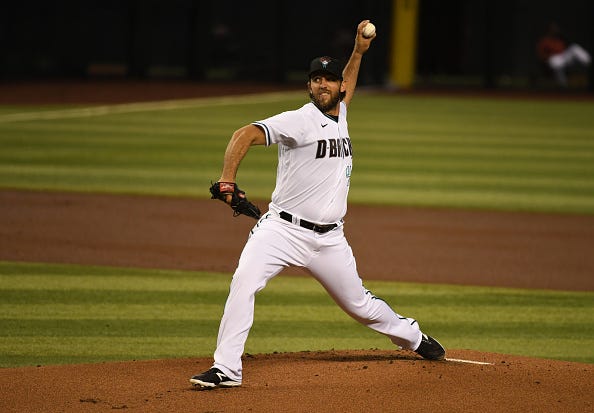 Thus Far, Diamondbacks Have Arguably Been Most Disappointing Team

Even before MLB expanded the postseason to eight teams a league, the Arizona Diamondbacks, who won quietly 85 games a year ago, were a trendy Wild Card pick. It's not to late for them to make good on said predictions, but Torey Lovullo's club has dug themselves an early hole, starting 3-8. Perhaps the most concerning trend is that Madison Bumgarner - who the club inked to a five-year/$85 million deal in free agency this past offseason - is 0-2 with a 7.04 ERA through his first three starts with the Diamondbacks. 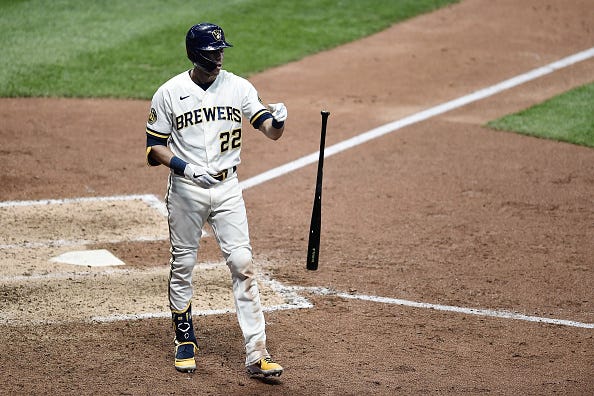 Christian Yelich is off to a brutal start. Photo credit (Stacy Revere/Getty Images)

Christian Yelich Off to Miserable Start in 2020

Over the last two seasons, FanGraphs says that only Mike Trout, Mookie Betts and Alex Bregman were more valuable offensive players than Milwaukee Brewers' right fielder Christian Yelich. If he hadn't broken his kneecap last September, Yelich may have won back-to-back National League MVPs. All that said, after signing a nine-year/$215 million extension in March, Yelich is off to a painfully slow start to his age-28 season. Through his first 34 at-bats of the season, Yelich has struck out 16 times and is hitting just .088. For a team so thin on starting rotation depth, it's alarming for Yelich to be this cold to open the season, especially when you add in that Lorenzo Cain opted out of the season last weekend. 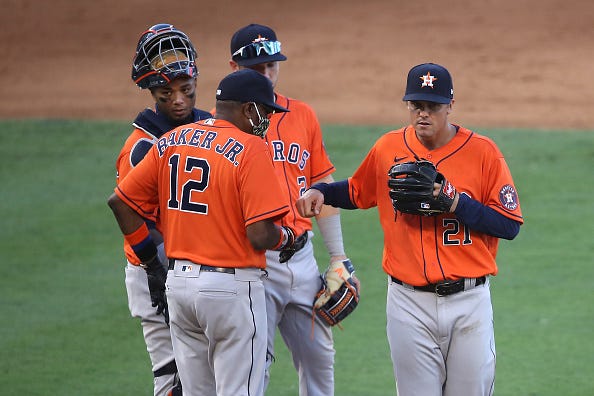 After playing seven games in the 2019 World Series, there was a thought that the Houston Astros and Washington Nationals may benefit most from a shortened 2020 season. To this point, that hasn't been true. The Astros have seen their pitching decimated with injuries, with ace Justin Verlander and closer Roberto Osuna likely out for the season. This, of course, is on top of losing Gerrit Cole in free agency over the winter. For the Nationals, Juan Soto is back, but only after missing the first week of the 2020 season for a lineup that saw Anthony Rendon depart in free agency this past offseason. Reigning World Series MVP Stephen Strasburg - who stayed healthier than he ever has in 2019 - has yet to pitch in 2020, as he's working his way back from a nerve issue in his right wrist. It's very difficult to reach the World Series in back-to-back years. It's nearly impossible when you lose key players in free agency and your remaining stars aren't able to stay healthy. 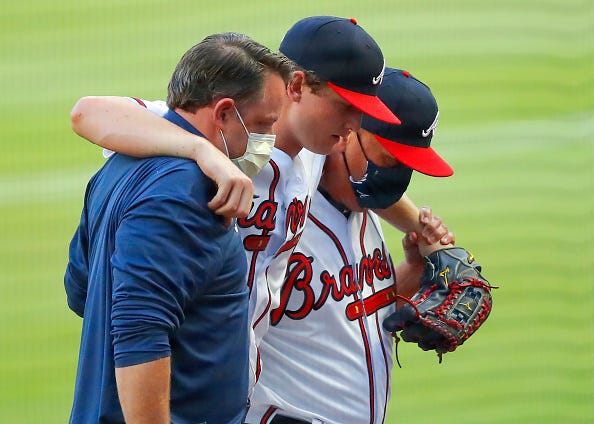 Sometimes, everything that can go wrong in a given year does. So far, that's been the story of the Atlanta Braves' starting rotation in 2020. After an impressive rookie season, Mike Soroka suffered a season-ending Achilles tear in his third start of the season. Mike Foltynewicz, who the team hoped would bounce back to his All-Star form of 2018, was outrighted off the 40-man roster after clearing waivers, a sign of how far he has fallen. Former World Series MVP Cole Hamels is yet to pitch in 2020 after signing a one-year, bounce-back deal in free agency. Of their remaining starters, Max Fried is the only one that has gotten off to a good start to the 2020 season. The Braves have a deep lineup, and are 8-4, despite slow starts from Freddie Freeman and Ozzie Albies. But even in a National League East that may have been overhyped, the Braves may face an uphill battle to winning their third consecutive division title with their current stable of starting pitching options. 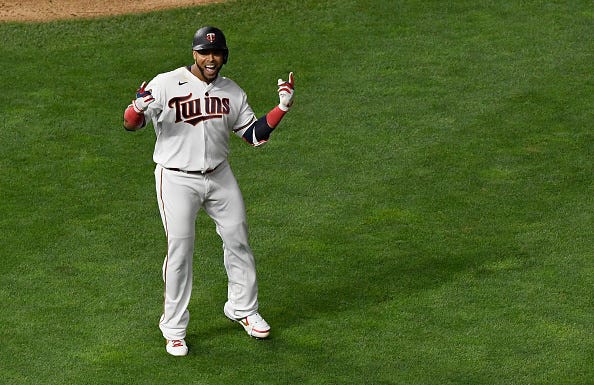 Nelson Cruz and the Twins are off to a hot start. Photo credit (Hannah Foslien/Getty Images)

The Twins Look Like a Legitimate World Series Contender

Even Bob Costas and Jennifer Aniston have to be beginning to get jealous at how well Nelson Cruz has aged. The 39-year-old is off to another hot start in 2020, as he's currently hitting .395 with three home runs and 15 RBIs. The power-hitting DH has aged like a fine wine. Cruz is part of arguably the most loaded lineup in baseball, one that also includes Max Kepler, Josh Donaldson, Mitch Garver, Jorge Polanco and Miguel Sano. Jake Odorizzi appears to be nearing a return from a back injury, and with that type of lineup, he, Jose Berrios and Kenta Maeda may form a good enough rotation for the Twins to make a World Series run.