It's not especially surprising that the New York Yankees, Chicago Cubs, Minnesota Twins, Oakland Athletics and Los Angeles Dodgers have had strong starts to the 2020 season. The same can't be said for the Colorado Rockies, who are off to a rather shocking 12-5 start.

You don't want to get too carried away about a 17-game sample size, but a year ago, the Rockies went 71-91. Most entering the season thinking there were three playoff contenders in the National League West - the Dodgers, San Diego Padres and Arizona Diamondbacks. While the Diamondbacks have been extremely disappointing thus far, both the Dodgers and Padres have had starts that put them on track to play in the postseason in 2020. The Rockies have just been better.

Four-time All-Star Charlie Blackmon is an early National League MVP candidate, as he's slashing .500/.527/.721 with three home runs and a league-leading 20 RBIs. Daniel Murphy looks healthy for the first time in a few seasons, and he's hitting .358. Trevor Story already has three home runs. And Nolan Areando, of course, is one of the sport's most complete players.

Perhaps the most encouraging sign in Colorado is that the team's starting rotation appears drastically improved over what it was a season ago. Kyle Freeland had a rather disastrous 2019 season, but has a 2.45 ERA after four starts in 2020. Both German Marquez and Antonio Senzatela are off to equally impressive starts as well.

Will the Rockies be able to hold off the Dodgers in the National League West all season? Probably not, but they appear to have one of the deepest lineups in baseball and possess three starters that are pitching at a frontline level in the early going. It's become impossible to ignore what's going on at Coors Field in 2020.

Here are our latest RADIO.COM MLB Power Rankings, which feature a ranking for the Rockies that would have been unfathomable a few weeks ago: 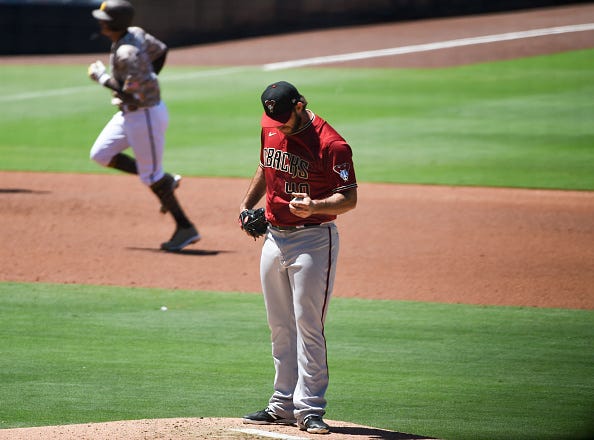 Madison Bumgarner and the Diamondbacks are off to a brutal start to the 2020 season. Photo credit (Denis Poroy/Getty Images)

Three National League West teams have gotten off to hot starts in 2020. The Diamondbacks aren't one of them. Hell, they'll enter the day Wednesday with a -26 run differential, one run worse than the division-rival San Francisco Giants, who are hardly seen as a playoff contender. Both Ketel Marte and Starling Marte have had strong starts to the 2020 season, but there's not a ton else to be excited about in the desert. After signing a five-year deal with the Diamondbacks in free agency, Madison Bumgarner is on the injured list with a back injury and has a 9.35 ERA to show for his first four starts with the team. Meanwhile, former All-Star Robbie Ray, in a contract year, has had an even worse start to the year, as he's posted a 10.59 ERA through four starts. The Diamondbacks may be digging themselves too big of a hole to climb out of. 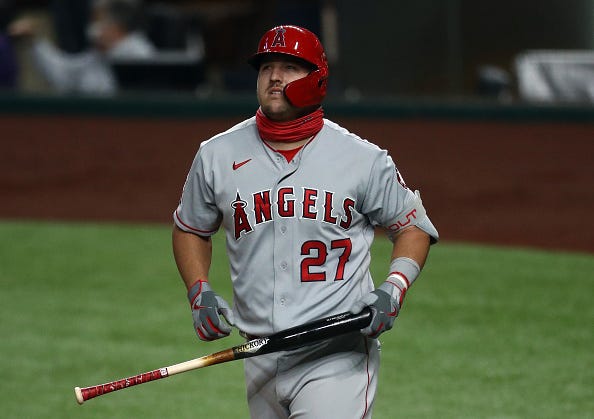 Will another huge season from Mike Trout be enough to carry the Angels to the playoffs? Photo credit (Ronald Martinez/Getty Images)

Angels May Waste Another Historic Year From Mike Trout

Because of course he is, Mike Trout is off to another unfathomable start in 2020. The three-time American League MVP is hitting .322 with seven home runs, 14 RBIs and a 0.9 fWAR in just 14 games. It's very possible that he wins his fourth MVP Award this year. Still, the Angels are off to just a 7-11 start, which puts them as much in the race for a top-five pick in the 2021 MLB Draft as the American League postseason race. While we're pretty confident that Anthony Rendon will overcome a slow start to his Angels' tenure, it's much harder to feel confident about the team's pitching. The starting rotation already lost Shohei Ohtani as a starting pitcher for the season, and an uninspiring bullpen has a 4.22 ERA so far this season. Even as Trout continues to build on one of the greatest peak's in MLB history, he may not partake in the postseason for the sixth consecutive season. 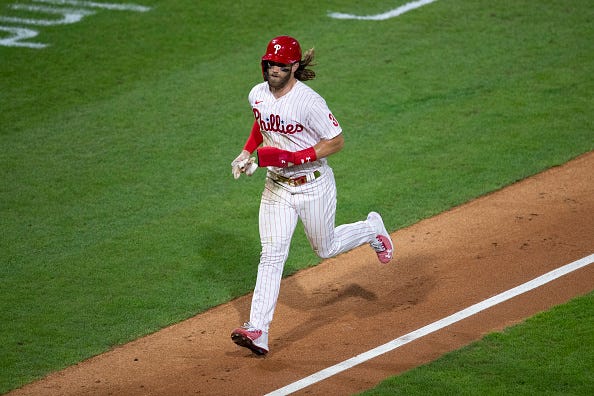 Bryce Harper is off to a hot start in 2020. Photo credit (Mitchell Leff/Getty Images)

What Should You Make of the Phillies?

Bryce Harper is off to a scorching start to his second season in Philadelphia, as he is hitting .324 with four home runs and 10 RBIs in just 28 games. Ditto for J.T. Realmuto, who already has five home runs and 12 RBIs to show in a contract year. Both Aaron Nola and Zack Wheeler have largely been excellent in the starting rotation. Still, Joe Girardi's club has a -4 run differential and is two games under .500 after 12 games because of a disastrous bullpen. The Phillies' bullpen collapsed in a loss to the Baltimore Orioles Tuesday, and yet, as Phillies Nation's Jonny Heller notes, the team's bullpen ERA actually went down, as it now stands at 10.19. It's pretty hard to imagine the Phillies not being one of the eight teams that will play in the National League playoffs this year, especially it feels like the bullpen almost has to be due for positive regression right now. But after 12 games, a historically bad bullpen is threatening to derail the entire season. 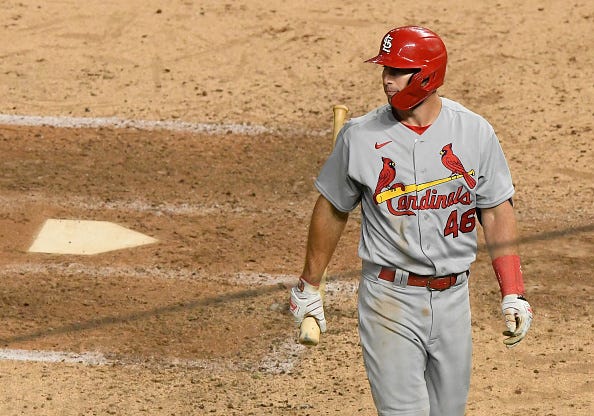 Paul Goldschmidt and the Cardinals are waiting to resume their season. Photo credit (Hannah Foslien/Getty Images)

The Cardinals Continue to Wait for Their Season to Resume

As most teams near 20 games played in the 2020 season, the Cardinals have just five contests to show so far this season. We're approaching mid-August, and the Cardinals have yet to play a game this month. It appears that the soonest they'll return to action is this Friday, when they're scheduled to play the White Sox in Chicago, though that should hardly be viewed as a certainty at this point. Multiple team employees have had to visit the hospital to get IVs because their Coronavirus symptoms have gotten that bad, per manager Mike Schildt. The Phillies and Marlins got behind on their schedule because of a COVID-19 outbreak, but their delays now pale in comparison to what the Cardinals are experiencing. Once they do eventually return, the Cardinals will likely need to have their playoff positioning determined by winning percentage, because it's almost impossible they'll be able to complete 60 games unless the season is extended. 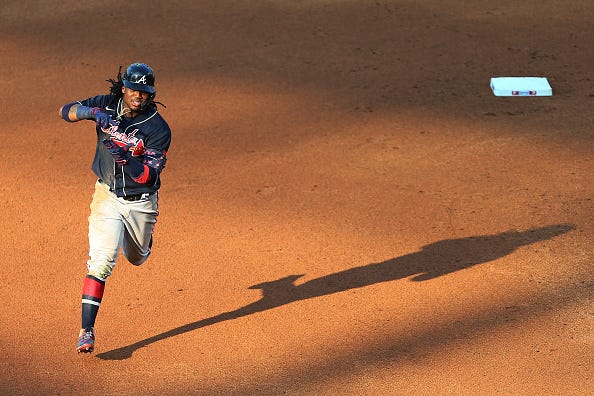 It's impossible not to be concerned about the Atlanta Braves' starting rotation. Mike Soroka is out for the season after tearing his achilles. Cole Hamels is yet to make his Braves' debut. And both Sean Newcomb and Mike Foltynewicz got off to such slow starts that they are now at the Braves' satellite squad, as opposed to getting continued opportunities to help a struggling rotation. Still, the two-time defending National League East Champions are off to an 11-8 start, and Ronald Acuña Jr. has three home runs, five RBIs and four walks in his last 22 plate appearances. Freddie Freeman, still working his way back from a bout with COVID-19, has two home runs, three doubles, a triple and five RBIs over the last week. The Braves are still waiting for Ozzie Albies to return from a wrist injury, but Acuña Jr. is the type of player that can carry you to the postseason in an underperforming division. You get the sense that he - with the help of Freeman and others - may just do that. 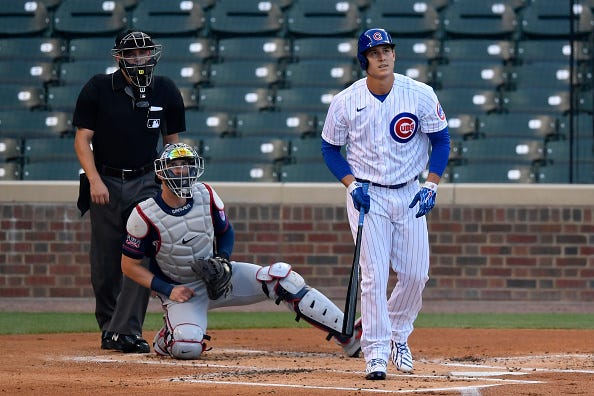 Anthony Rizzo and the Cubs are off to a hot start. Photo credit (Quinn Harris/Getty Images)

Cubs Could Run Away With National League Central

While the defending National League Central Champion St. Louis Cardinals have had their 2020 season on hold because of a COVID-19 outbreak, the Cubs have racked up a ton of wins in the early-going. Each of Anthony Rizzo, Ian Happ and Javier Báez already have three home runs. Wilson Contreas and Jason Heyward have impressed early on as well. For both 2020 and beyond, the Cubs need to get Craig Kimbrel on track, but his early struggles are easier to swallow given how impressive Kyle Hendricks, Jon Lester and Yu Darvish have been at the top of the rotation. With the Cardinals' season on hold and both the Cincinnati Reds and Milwaukee Brewers off to middling starts, the Cubs have a chance to build an insurmountable lead in the National League Central in the first month of the season.