Welcome to baseball, where it takes a faux-scandal for a young superstar to become a household name nationally.

Instead of focusing on whether Fernando Tatís Jr. should have swung 3-0 Monday night with a seven-run lead or stolen third base with a six-run lead Tuesday, let's talk about the type of season that the 21-year-old is having.

Injuries limited the San Diego Padres' shortstop to just 84 games in 2019, or he would have challenged New York Mets' first baseman Pete Alonso for the National League Rookie of the Year Award. Never mind that, though, because as Alonso tries to get over a relatively slow start, Tatís Jr. has made himself the early favorite for the National League MVP Award.

Where do the Padres rank as Tatís Jr. attempts to lead them to their first playoff appearance since 2006? Here are our latest RADIO.COM Sports MLB Power Rankings: 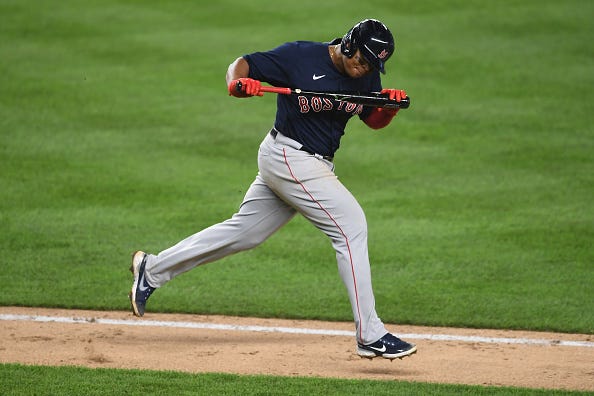 Red Sox Off to Disastrous Start

Without Chris Sale, you had a pretty good idea that the Red Sox were going to have one of the worst pitching staffs in baseball in 2020. The Red Sox currently have a 6.36 team ERA, which is by far the worst mark in the sport. More disappointing is that some of the stars they kept in their lineup are underperforming. In what feel like the waning days of his time in Boston, J.D. Martinez is hitting just .244. A year after finishing in the top 15 in American League MVP voting, Rafael Devers is hitting just .207 and currently has a -0.6 fWAR. Meanwhile, Mookie Betts is having a monster season with the Los Angeles Dodgers. Perhaps the sports gods felt that Boston was overdue for a lean sports year, but 2020 has been especially cruel. 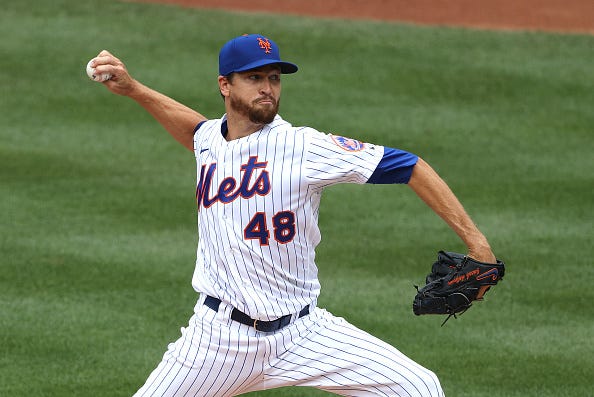 The Mets’ Rotation Has Been Decimated by Injuries

On paper, the New York Mets appeared to have one of the deepest rotations in baseball entering spring training. Of course, on paper, Carlos Beltrán was supposed to be the team's manager, so things never seem to go as planned in Queens. Noah Syndeergaard had season-ending Tommy John surgery in March. Marcus Stroman opted out of the remainder of the 2020 season earlier this month. Both Steven Matz and Rick Porcello have had fairly disastrous starts to the season. Even two-time defending National League Cy Young Award winner Jacob deGrom was scratched from his most recent scheduled start with neck stiffness and is slated to make his first start in 10 days Wednesday evening in Miami. What's that saying about best-laid plans? 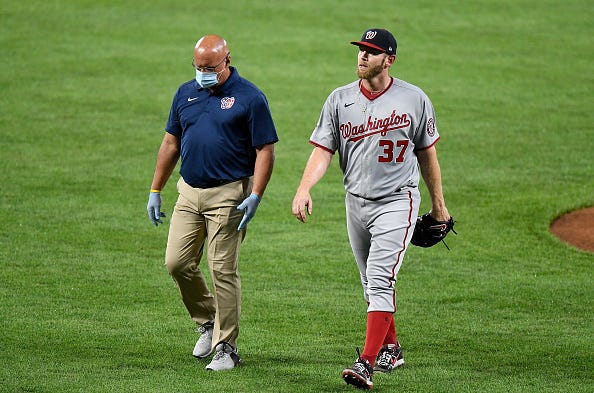 Between 2015 and 2018, the most innings that Stephen Strasburg pitched in a single season was 189.1 in 2017. Then, as he helped lead the Washington Nationals to their first World Series title in 2019, he pitched 245.1 total innings when you count the team's postseason run, just a year after being limited to 130.0 innings. Never mind the studies that suggest pitchers tend to get injured the year after giant innings increases, Strasburg has never stayed as healthy as he did in 2019, so to expect him to sustain that was unrealistic. Unfortunately, he's now on the injured list for the second time this season, as a nerve issue in his pitching hand continues to bother him. Perhaps Juan Soto's individual greatness will be enough to carry the Nationals into the postseason with eight teams from each league going this year, but the team's chances to repeat as World Series Champions feel slim. 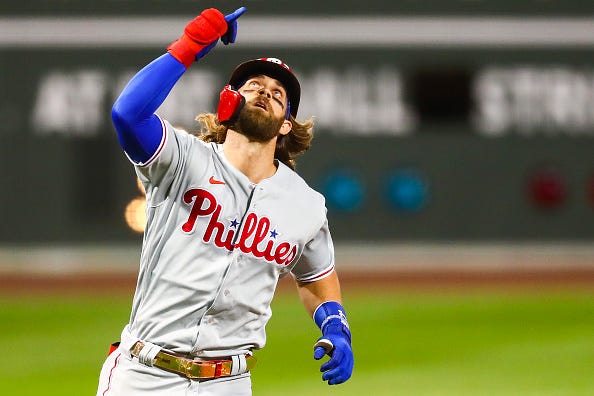 Bryce Harper is off to a quick start in 2020. Photo credit (Adam Glanzman/Getty Images)

Bryce Harper Off to Monster Start in Second Season With Phillies

Remember that strange clip that surfaced in June where Chris "Mad Dog" Russo suggested that Bryce Harper "stunk" in his first season with the Phillies? When you consider that Harper homered 35 times and drove in 114 runs in his first season in red pinstripes, you get the sense that the Mad Dog didn't watch too many Phillies games in 2019. Well, he better check in now, because the 27-year-old is putting together an MVP-caliber campaign in Philadelphia. In 18 games, Harper is slashing .367/.486/.700 with five home runs, 15 RBIs, a 1.186 OPS and a 1.3 fWAR. Even as the Phillies try to play catch up for losing nearly a week's worth of action early in the season, FanGraphs says that Harper, the 2015 National League MVP, has been the eighth-most valuable hitter in all of baseball this season. 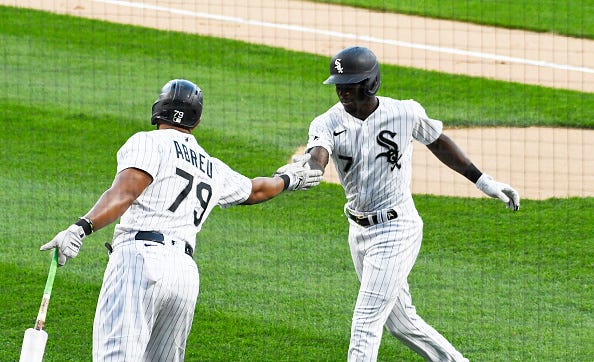 The White Sox have had a nice start to the 2020 season. Photo credit (David Banks/Getty Images)

With the Detroit Tigers playing at a higher level than anyone anticipated, the American League Central has turned into an especially difficult division to navigate through. The White Sox, who currently find themselves in third place but within striking distance of the top spot, have done a good job staying afloat early on. Eloy Jiménez, Tim Anderson, Yoan Moncada and Luis Robert each already have five home runs. Certainly, it's concerning that RHP Lucas Giolito has a 4.88 ERA and 4.08 FIP in his first five starts after an All-Star season, but the young corps that the White Sox have built figures to lead them to multiple American League Central titles, even if the first probably won't come in 2020. 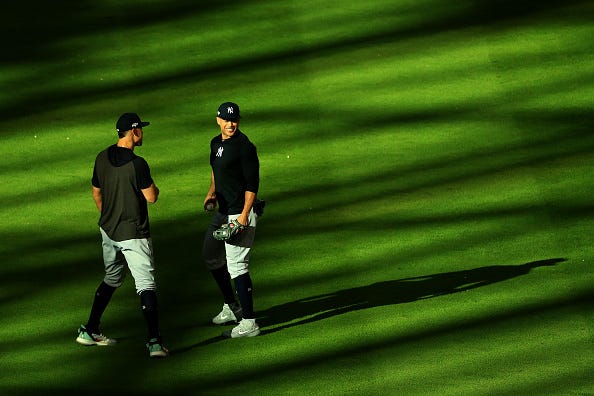 Two of the Yankees' biggest stars are on the injured list. Photo credit (Mike Ehrmann/Getty Images)

Once Again, Yankees Are Without Biggest Stars

Remember the first 10 days of the 2020 season where it felt like Giancarlo Stanton and Aaron Judge took turns hitting tape-measure home runs? Now, both sluggers find themselves back on the injured list, where they spent large chunks of the 2019 season. Stanton could miss nearly a month with a hamstring strain, after playing in just 18 games a season ago. The 30-year-old is still owed over $200 million after 2020, assuming he doesn't opt-out after this season, something that would seem unfathomable right now. Meanwhile, Judge's MVP candidacy has been halted, as he's on the injured list with a strained right calf. Following a monster rookie campaign in 2017, Judge played in just 214 of 324 games between 2018 and 2019. His latest injury isn't especially concerning on its own, but that he continues to deal with injuries is. It doesn't help that DJ LeMahieu is also on the injured list with a thumb injury currently. There's little doubt that Judge and Stanton could hit in the middle of a lineup that wins the World Series. But whether both will ever be able to stay healthy consistently enough to be relied upon is fair to wonder.