If Game 6 of the World Series was Stephen Strasburg's final start as a Washington National, he finished on about as high of a note as possible.

Following a regular season that will likely net him a top five finish in National League Cy Young Award voting, Strasburg capped off a career-defining postseason by pitching 8.1 innings in a win-or-go-home Game 6 of the 2019 World Series. The Nationals won Game 6 7-2, and ultimately pulled out a Game 7 victory, with Strasburg being named World Series MVP.

Even as the team continued to celebrate the first World Series title in franchise history, Strasburg - a Scott Boras client - opted out of the final four years and $100 million on his contract. At the height of his powers, the three-time All-Star will certainly get a larger deal on the free-agent market, both in terms of years and average annual value.

The Nationals appear to have a strong chance to retain Strasburg, but here's a look at all the possible ways the market for the 10-year veteran could play out: 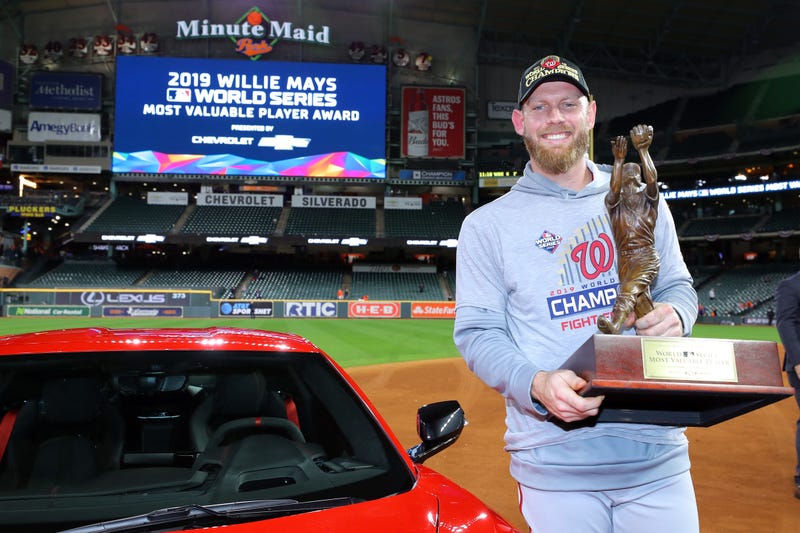 Strasburg was the No. 1 overall pick by the Nationals in 2009, and entered the league with Andrew Luck-like type hype. Though he's struggled with injuries at time in his career, the 31-year-old is coming off of one of his two 200 plus inning seasons and just won the World Series MVP.

It just feels like everything is aligned for the Nationals to ultimately retain Strasburg.

Prior to Strasburg's decision to opt out, Mark Feinsand of MLB.com reported that the expectation around baseball was the Strasburg would indeed opt out, but ultimately re-sign with the Nationals for five or six seasons.

After cementing his status as one of the era's best postseason pitchers, MLB Trade Rumors projects that Strasburg will land a six-year/$180 million deal in free agency. The feeling here - and in most places - is that when he signs a deal in that neighborhood, he'll be returning to the nation's capital. 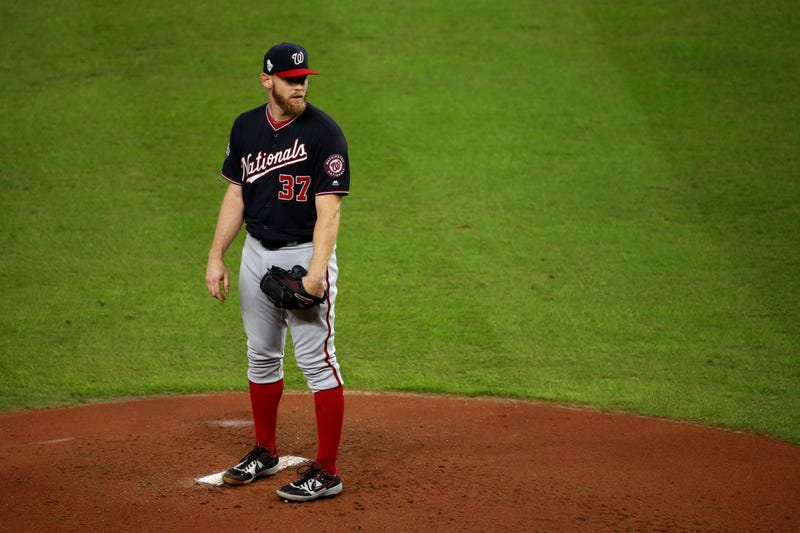 In an unusual twist, the Yankees geography may actually work against them this offseason.

While Andy Martino of SNY reported that the Yankees do expect to pursue Houston Astros RHP Gerrit Cole this offseason, ESPN's Buster Olney has reported that "industry expectation" is that Cole will sign with the Angels. Olney has also spoken to teammates of Cole that think he wants to play for a team in California.

Similarly, Strasburg is from San Diego, so if he ultimately decides to leave D.C., he may be inclined to sign with a team on the West Coast.

That said, Strasburg is a client of Boras, who often ultimately has his clients sign with the team that offers the highest overall deal. The Yankees have lost to the Houston Astros in the ALCS two times in three years. Aroldis Chapman is 31. DJ LeMahieu is 31. James Paxton is 30. Masahiro Tanaka is 30. Giancarlo Stanton is 29. Aaron Judge will turn 28 early in the 2020 season. They're built to win right now, and need another frontline arm, which may make them more motivated to be aggressive on the free-agent market than they have been for much of the post-George Steinbrenner era. 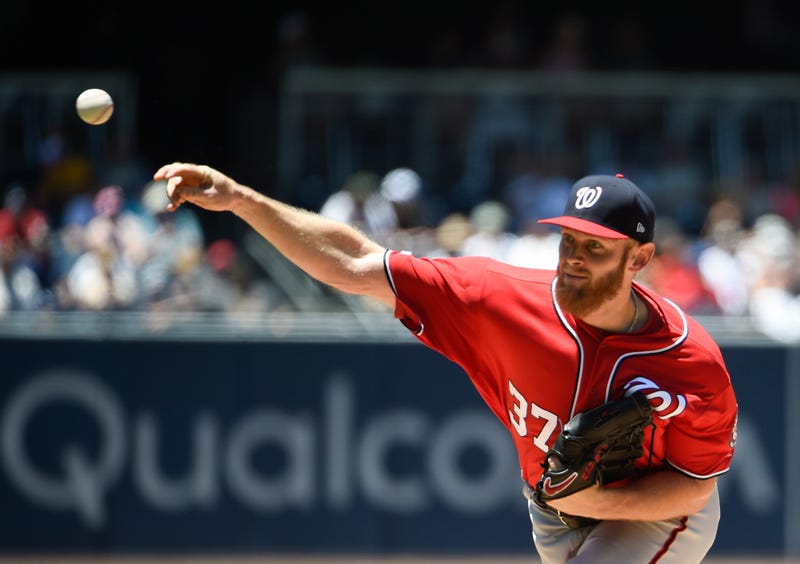 If he doesn't ultimately re-sign with the Nationals, the Padres may actually be the best bet to land Strasburg.

In addition to him being from San Diego and having played his college ball at San Diego State, the addition of Strasburg would make the Padres a potential contender in 2020.

Strasburg, in this scenario, would headline a rotation that already includes 23-year-old righty Chris Paddack, who posted a 3.33 ERA in 29 starts in his rookie season. The Padres employ one of the game's elite closers in Kirby Yates. Fernando Tatis Jr. flashed superstar potential in an abbreviated rookie season, and four-time All-Star Manny Machado figures to bounce back in his second season in San Diego. The Padres, per MLB Pipeline, also possess the top overall farm system in baseball to supplement what they already have at the major league level.

Though the Padres seem to be in a strong position long term from an organizational standpoint, A.J. Preller has been the general manager since August of 2014 and the Padres haven't posted a winning record during that time. The last winning season in San Diego was in 2010. The Padres haven't made the playoffs since 2006. So for Preller - who took a risk by tabbing first-time manager Jayce Tingler as the club's new manager - it's time for results at the major league level. Strasburg would bring that. 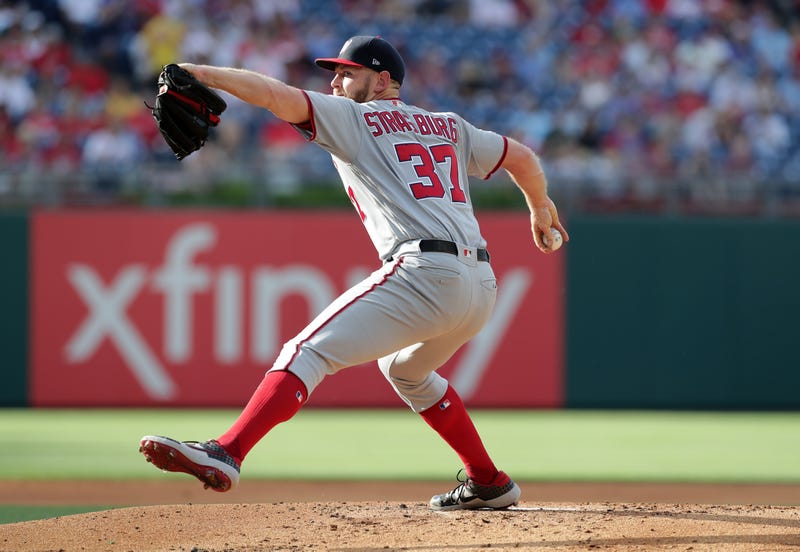 The Phillies went 81-81 in 2019, and, if you needed a reminder, Philadelphia isn't exactly down the road from San Diego. So certainly, the Phillies aren't the most likely landing spot for Strasburg. But money is a great equalizer, and as Phillies managing partner John Middleton demonstrated last year, he's willing to use some of his financial might to help the team return to contention.

Aaron Nola is really the only certain thing projected to be in the Phillies 2020 rotation, but the organization reportedly plans to be "aggressive" again this offseason, which you would think means seeking upgrades in the starting rotation.

There's a case to be made that their only real path to being a serious contender with the Atlanta Braves and Washington Nationals (and possibly the New York Mets) at the top of the National League East would be to sign either Gerrit Cole or Strasburg.

It's unclear if the Nationals would be any more aggressive in their attempt to re-sign Strasburg if they got the sense he may sign with a division rival, as opposed to another team on this list. 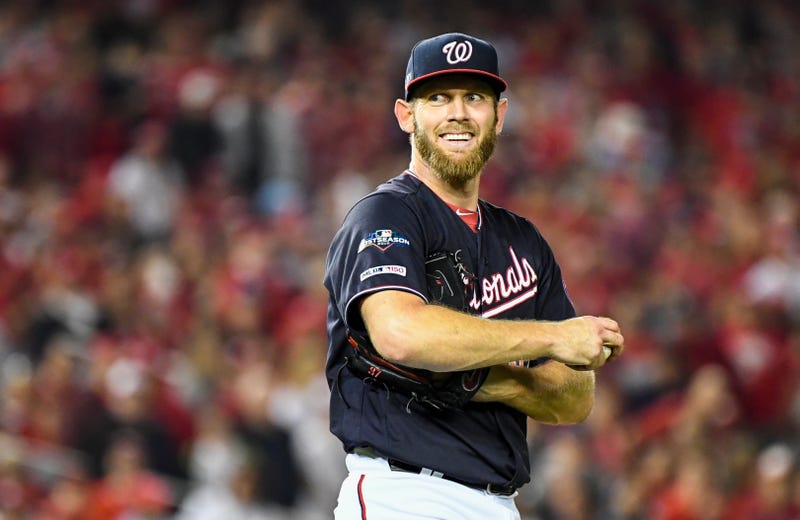 Stephen Strasburg could be a back-up plan for the Angels. Photo credit (Jonathan Newton/The Washington Post via Getty Images)

The Angels may be the front-runner for Gerrit Cole, but if they miss out on him, their need for elite pitching won't go away. Neither will the desire to put a contending team around future Hall of Famer Mike Trout, who is 28 and still hasn't won a playoff game in his illustrious career.

It is possible, however, that the Angels won't be as interested in Strasburg as in Cole. In addition to Cole's connections to Los Angeles, he's nearly two years younger than Strasburg and doesn't come with the injury history that Strasburg does. Given how the Angels have been burned on free-agent investments this decade - Albert Pujols and Josh Hamilton come to mind - they may shy away from being aggressive bidders for Strasburg.

That said, if the Angels miss out on Cole and Strasburg is still on the market (which doesn't feel overly likely), you would have to think general manager Billy Eppler would be interested to some degree.