By just about any metric - WAR, ERA, FIP, Awards - Los Angeles Dodgers LHP Clayton Kershaw was the most dominant regular season pitcher of the 2010s. But while Kershaw won three National League Cy Young Awards and five ERA titles in the 2010s, the future Hall of Famer had legitimate and consistent struggles in the postseason.

In 143 postseason innings in the 2010s, Kershaw posted a 4.28 ERA. For reference, Kershaw's career regular season ERA is 2.44, the 37th best mark in baseball history. After blowing a lead in Game 5 of the 2019 NLDS - which the Dodgers would go on to lose to the eventual World Series Champion Washington Nationals - Kershaw admitted that narratives about his postseason struggles are true "right now." 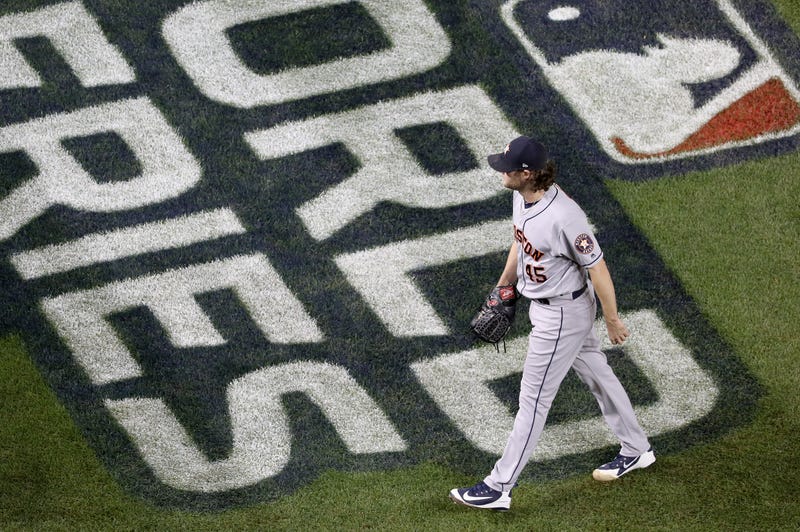 Gerrit Cole had a dominant 2019 postseason for the Houston Astros. Photo credit (Will Newton/Getty Images)

The lasting memory of him in the postseason may ultimately be him warming up in the bullpen multiple times but not entering Game 7 of the 2019 World Series as the Houston Astros bullpen blew a lead. However, that would do a disservice to just how impressive Cole was in the 2019 playoffs.

On the cusp of free-agency, Cole allowed just one combined run across two starts that spanned 15.2 during the Astros five-game ALDS win over the Tampa Bay Rays. Even without his sharpest stuff, Cole limited the New York Yankees to just four hits in seven shutout innings in Game 3 of the ALCS. And while he briefly looked human in a Game 1 World Series loss to the Washington Nationals, Cole returned for seven innings of one-run ball in Game 5 of the 2019 World Series, putting the Astros up 3-2 as they headed back to Houston.

In 10 total playoff starts in the 2010s - three of which came while he was a member of the Pittsburgh Pirates - Cole posted a 2.60 ERA and 0.87 WHIP in 65.2 innings. Of all pitchers on this list, he's the most likely to find himself on the best postseason pitchers of the 2020s. 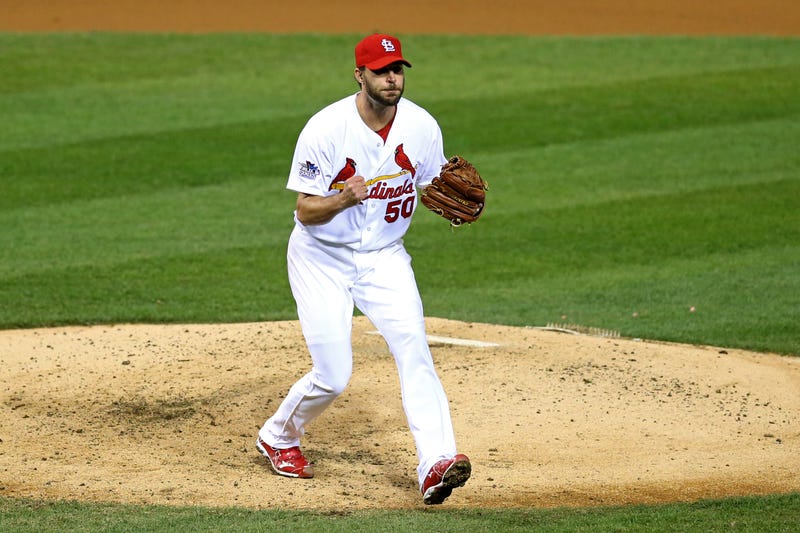 Adam Wainwright has been one of the better postseason pitchers of his era. Photo credit (Ronald Martinez/Getty Images)

Wainwright missed the entirety of the 2011 season after having Tommy John surgery. The Cardinals would win the World Series in 2011 - upsetting the heavily-favored Philadelphia Phillies in the NLDS and defeating the Texas Rangers in a classic seven-game series.

Still, Wainwright used this decade to add onto a postseason resume that already included closing out a World Series in 2006. 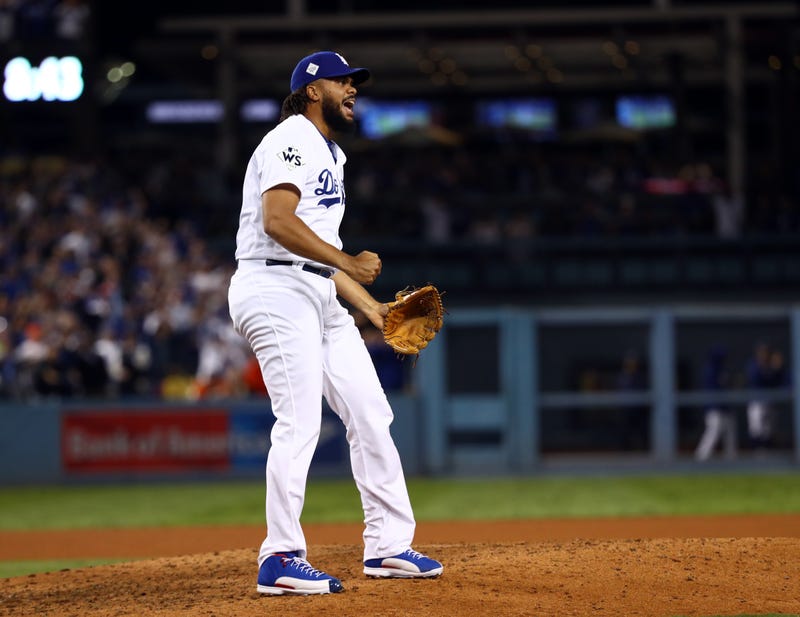 Kenley Jansen helped the Dodgers to reach the World Series in 2017 and 2018. Photo credit (Alex Trautwig/MLB via Getty Images)

Jansen went from being a catcher that the Dodgers signed as an undrafted free-agent in 2004 to one of the game's elite closers in the 2010s. 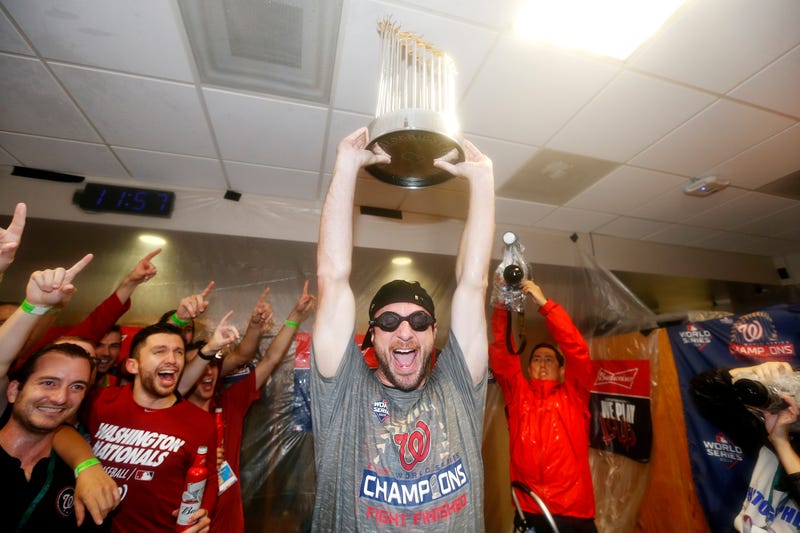 Scherzer is one of just two pitchers on this list to appear in the World Series with two different teams this decade - he did so with the Detroit Tigers in 2012 and the Washington Nationals in 2019.

While he's likely to be remembered for starting Game 7 of the 2019 World Series just days after having to be scratched from his scheduled Game 5 start, his best postseason start probably came in Game 2 of the NLDS that year. While opposing Wainwright, Scherzer struck out 11 St. Louis Cardinals hitters and allowed just one hit over seven shutout innings. The Nationals would eventually sweep the NLCS en route to their first World Series title in franchise history. 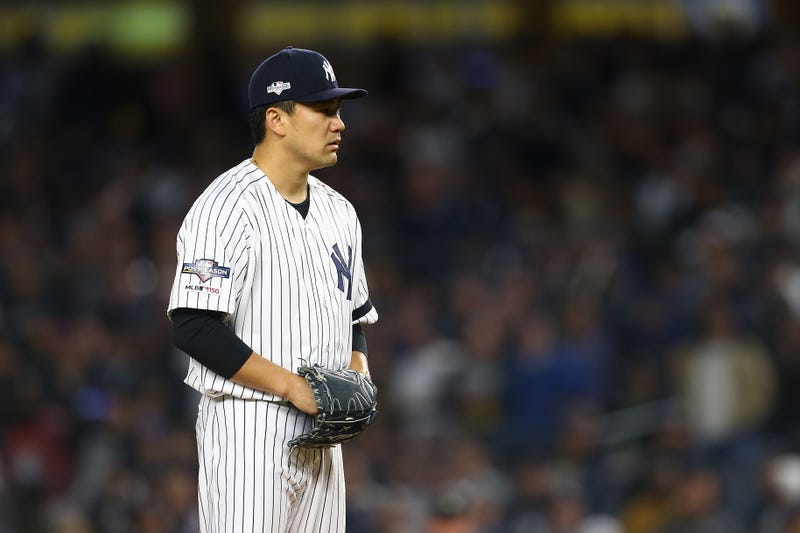 Masahiro Tanaka was a consistent performer for the Yankees in the postseason in the 2010s. Photo credit (Mike Stobe/Getty Images)

The 2010s were the first decade since the 1910s that the New York Yankees didn't reach the World Series. That certainly wasn't Tanaka's fault, though.

The Japanese-born right-hander was one of the most reliable postseason pitchers of the decade, posting a 1.76 ERA and 0.78 WHIP in eight postseason starts since entering the majors in 2014.

Tanaka will pitch at age 31 in 2020, so his postseason resume almost certainly isn't completed yet. 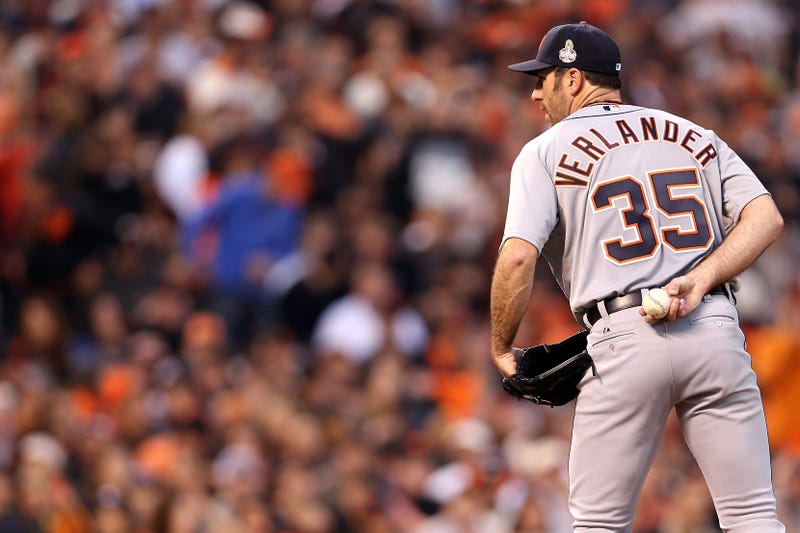 Justin Verlander helped both the Tigers and Astros reach the World Series in the 2010s. Photo credit (Christian Petersen/Getty Images)

Though Verlander's numbers in the World Series - he pitched in three in the 2010s - are surprisingly less-than-stellar, he was still a very effective postseason pitcher for both the Detroit Tigers and Houston Astros.

Ironically, Verlander's most dominant individual postseason came in 2013, when the Tigers were ultimately eliminated by the eventual World Series Champion Boston Red Sox in the ALCS. Verlander made three starts in the 2013 American League playoffs, posting a 0.39 ERA in 23.0 innings. 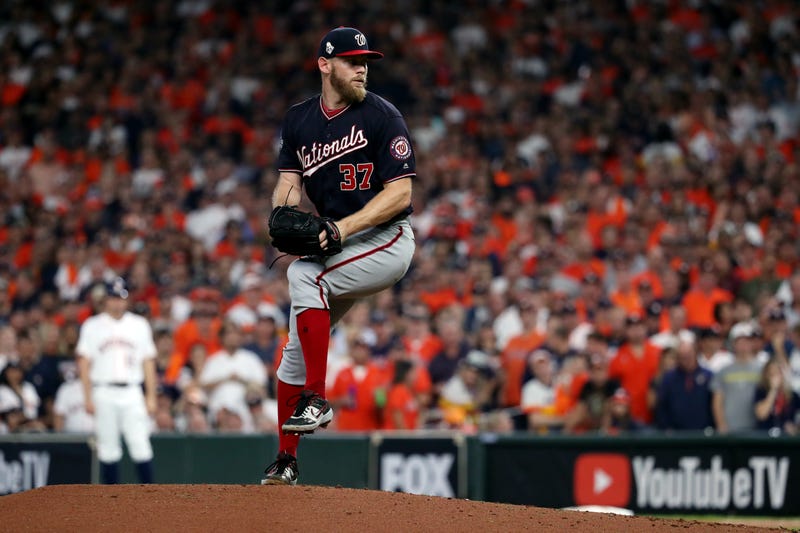 Until 2019, it was hard to discuss Strasburg without at least mentioning the Nationals decision to shut him down in September of 2012, his first full season back from Tommy John surgery. The Nationals ultimately lost in a five-game NLDS that season.

But during the 2019 postseason, Strasburg exercised any prior demons, going 5-0 with a 1.98 ERA, 0.94 WHIP in six postseason games, five of which were starts. Most notably, the former No. 1 overall pick went 8.1 innings and limited the Astros to just two runs in a Game 6 win over the Houston Astros with the Nationals facing elimination. He was ultimately named the 2019 World Series MVP. 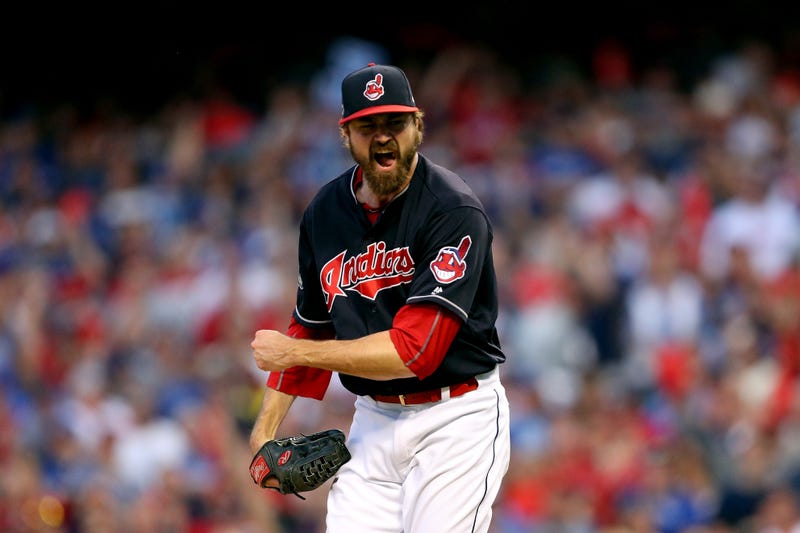 Andrew Miller was dominant for the Cleveland Indians in the 2016 playoffs. Photo credit (Maddie Meyer/Getty Images)

Though the Cleveland Indians ultimately lost the 2016 World Series to the Chicago Cubs in seven games, Andrew Miller's postseason bordered on iconic.

Miller pitched 19.1 innings across 10 appearances for Terry Francona's Indians in the 2016 postseason, posting a 1.40 ERA while recording five holds and a save.

During the 2010s, Miller appeared in the postseason as a member of the Indians, Boston Red Sox, New York Yankees and St. Louis Cardinals. The once-coveted starting pitching prospect posted a 0.95 ERA and 0.84 WHIP across 38.0 innings. 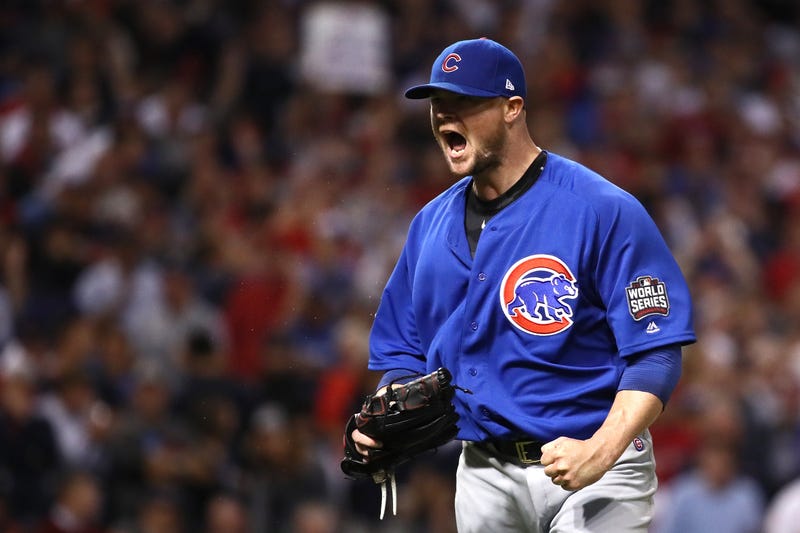 Lester may go down as the most underrated starter of the decade, as FanGraphs says that he was the ninth-best regular season pitchers of the 2010s. His postseason accomplishments would be impossible to underrate, though.

Lester appeared in the postseason as a member of the Boston Red Sox, Oakland Athletics and Chicago Cubs in the 2010s. Despite a disastrous 2014 Wild Card Game start that saw him allow eight runs, six of which were earned, he still managed to post a 2.47 ERA in 113.0 postseason innings in the 2010s. 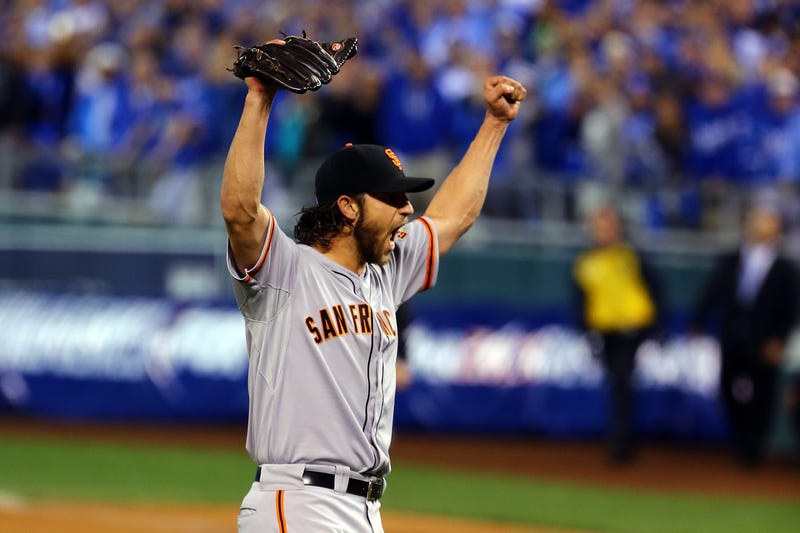 Bumgarner was unrivaled in this discussion. Frankly, he may be the greatest postseason pitcher in baseball history.

Though he entered the decade lesser-known than rotation mates Tim Lincecum and Matt Cain, Bumgarner helped guide the Giants to three World Series titles. In 102.1 postseason innings in the 2010s, Bumgarner tossed three complete games, while posting a 2.11 ERA and 0.90 WHIP.