Two jerseys which we'd expect to be flying off the shelves entering and throughout the 2020 MLB season are that of new Yankees ace Gerrit Cole and new Dodgers outfielder Mookie Betts. However, though they're arguably two of the top five players in the entire Major Leagues, you're not going to find them on the following list.

That's because Cole and Betts wear the relatively obscure uniform numbers of 45 and 50, respectively, and their presence alone isn't enough to move those numbers into the 12 most star-studded uniform numbers in the league -- though they're close, as Cole is joined by Zack Wheeler to represent No. 45, and Betts is joined by Charlie Morton for No. 50.

The same goes for No. 48, despite the presence of Jacob deGrom and Matthew Boyd, and No. 31, though Max Scherzer, Joc Pederson, Aaron Hicks and co. form a formidable squad. Even a number like 25, which has long been considered the number of pure power in MLB with wearers like Barry Bonds, Mark McGwire, Jim Thome and others, has faltered lately, with Gleyber Torres and Byron Buxton attempting to keep it afloat. One number lower, where Miguel Cabrera and Josh Donaldson roam, would have been on here a few years back, but that's not the case in 2020. Aaron Judge's No. 99, which is also worn by Hyun Jin Ryu and Alex Verdugo, is another close cut.

So which dozen numbers are the ones worn by the best crop of players the league has to offer? Let's find out.

All information retrieved from Baseball Reference. 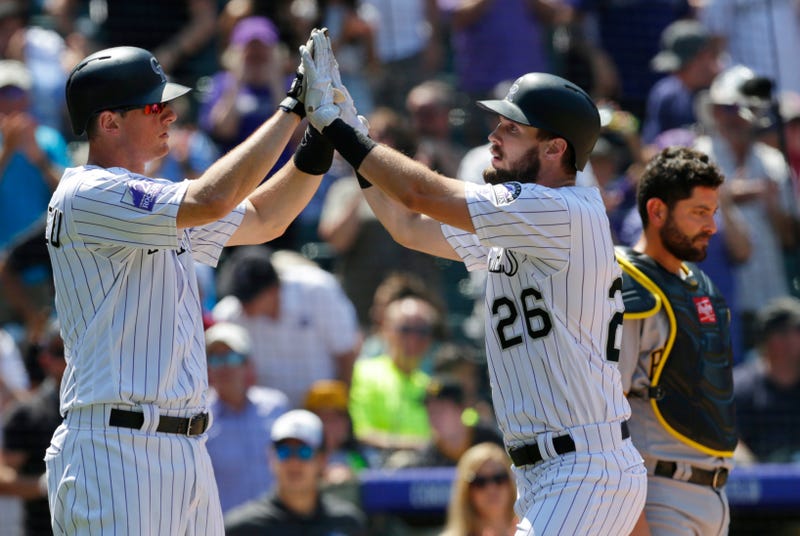 Why DJ LeMahieu doesn't get more recognition is beyond me. It seems as though his two breakout seasons were both slightly swept aside as flukes, but his 7-for-17 start in 2020 is promising. He sits at the front of a group with great up-and-coming power (Chapman and Kepler), solid contact hitters (Dahl and Frazier) and a duo of pitchers looking to return to form. 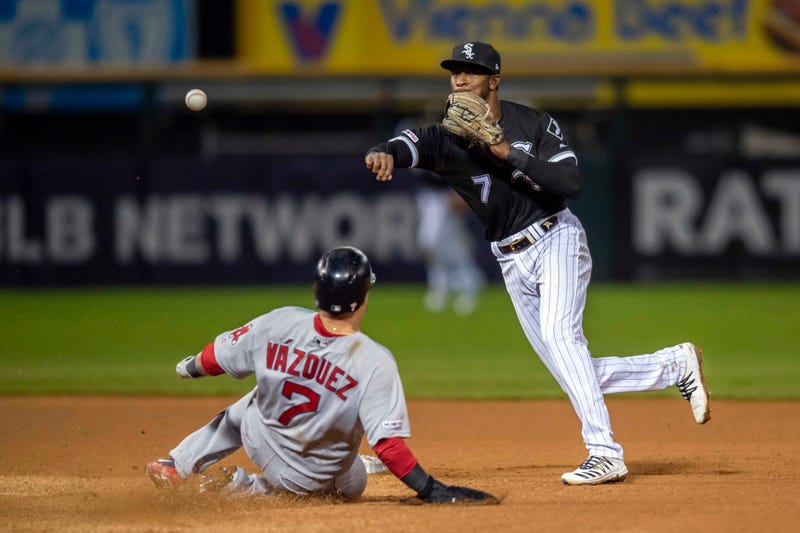 No. 7 Tim Anderson fires to first next to a sliding No. 7 Christian Vazquez. Photo credit (Patrick Gorski/USA Today)

If Anderson can win another batting title, if Suarez can hit 49 HR again and if Turner continues to develop into a star, this team could move up the ranks in a hurray. The biggest surprise so far, though, is Vazquez, who leads 2020 MLB with four home runs and a ridiculous 1.105 slugging percentage. 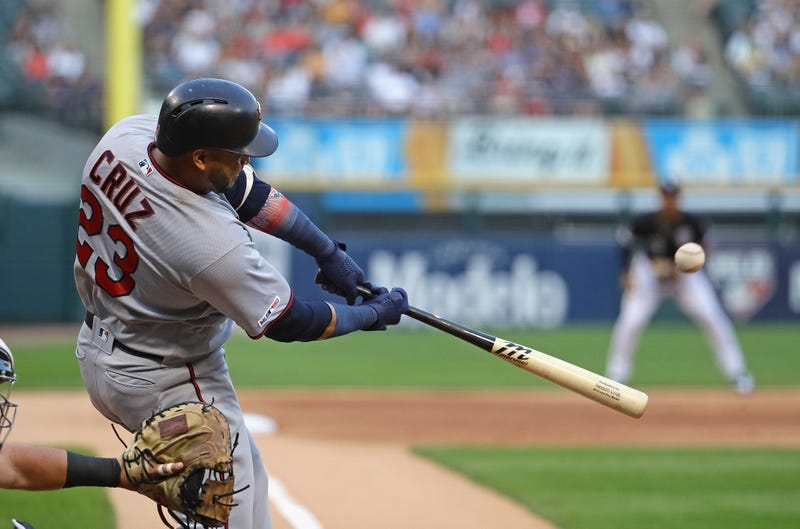 Cruz (3 HR, league-leading 11 RBI) and Encarnacion bring the pop and veteran experience, while Fernando Tatis Jr. and Michael Brantley bring the all-around superstar play. A few promising pitching options, in Zac Gallen and Mitch Keller, mix with the proven starter Mike Minor to round out a solid group. 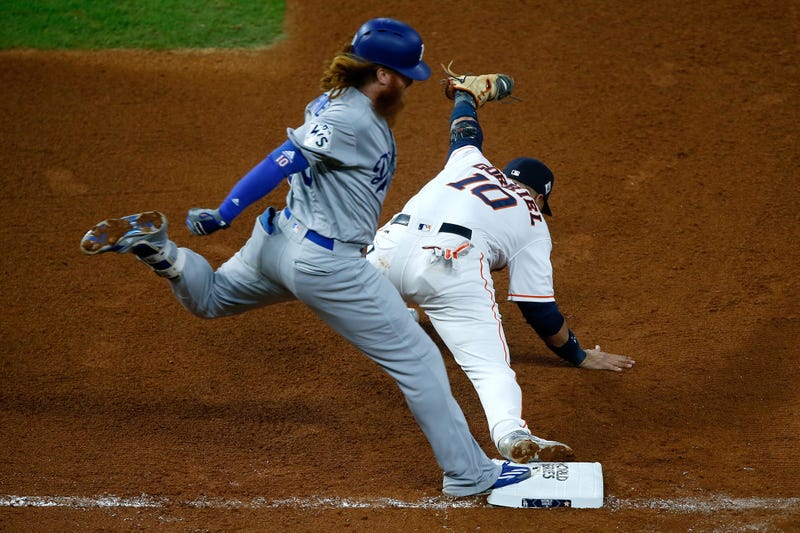 No. 10 Yuli Gurriel extends off of first base in an attempt to retire No. 10 Justin Turner. Photo credit (Bob Levey/Getty Images)

This lineup is full of trusty weapons, including a bunch of guys you can turn to for a high average and on-base percentage. Under-the-radar stars Semien and Reynolds intertwine bigger names like Realmuto and Gurriel to create a lineup with few holes. 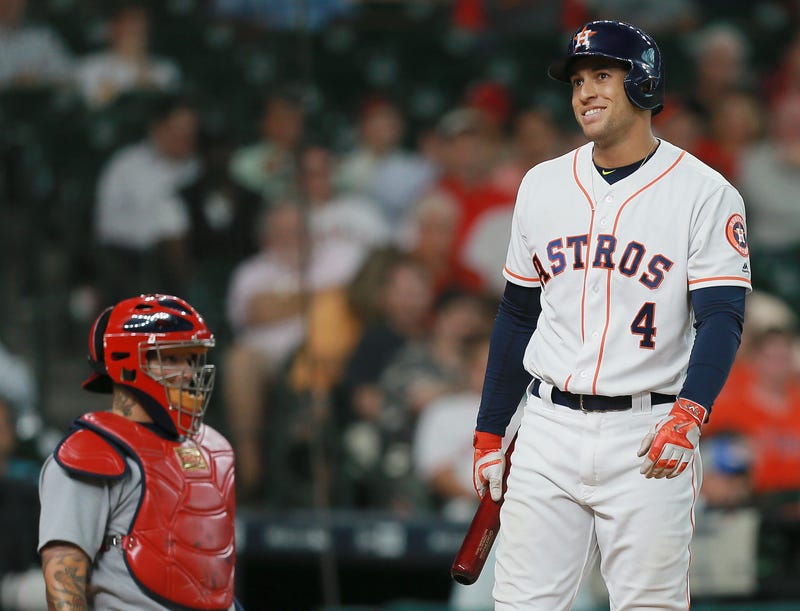 No. 4 George Springer reacts to a strike, while backstop Yadier Molina, also No. 4, looks on. Photo credit (Bob Levey/Getty Images)

If this group returns to peak form, in which Snell can pitch at a Cy Young level and Springer bats better a tad better than his current .048 batting average, then it will boast a trio of superstars (those two, along with Marte) that's hard to beat. 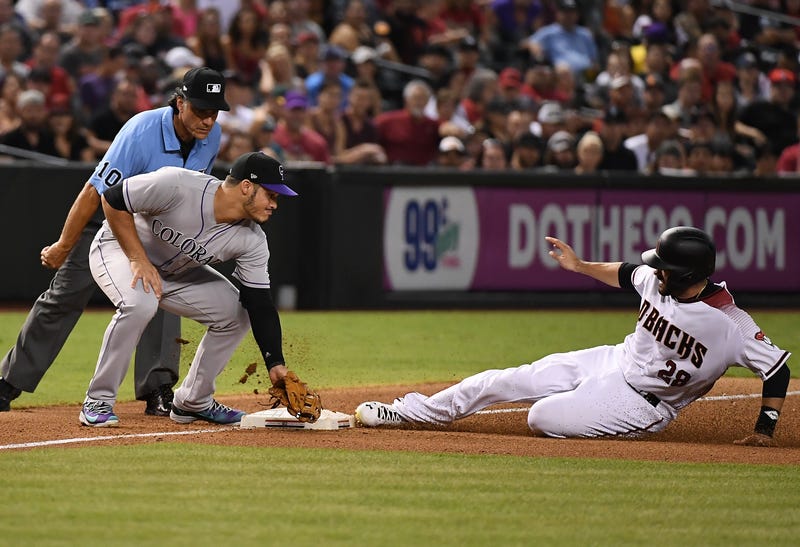 No. 28 Nolan Arenado applies a tag on No. 28 J.D. Martinez, who still wears the same uniform number for the Red Sox. Photo credit (Norm Hall/Getty Images)

Good luck stopping a heart of the order containing Arenado (five straight years of 37-plus HR and 110-plus RBI), Martinez (three straight years of 36-plus HR and 100 RBI) and Olson (36 HR in 2019) from putting up runs night in and night out. Though Kluber is in danger of missing the rest of the season, Kyle Hendricks delivered a phenomenal first start (9.0 IP, 3 hits, 0 ER, 9K), though he didn't look great his next time out. Heaney is another guy to watch, with a 2.79 ERA after two starts. 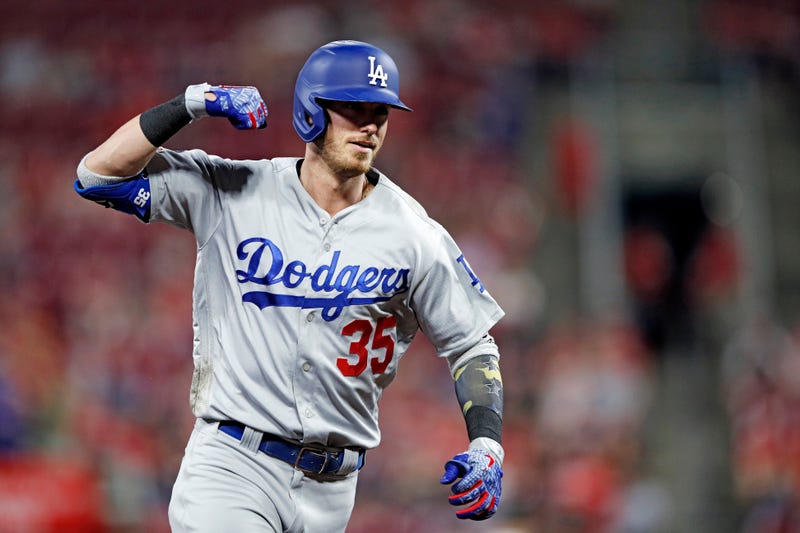 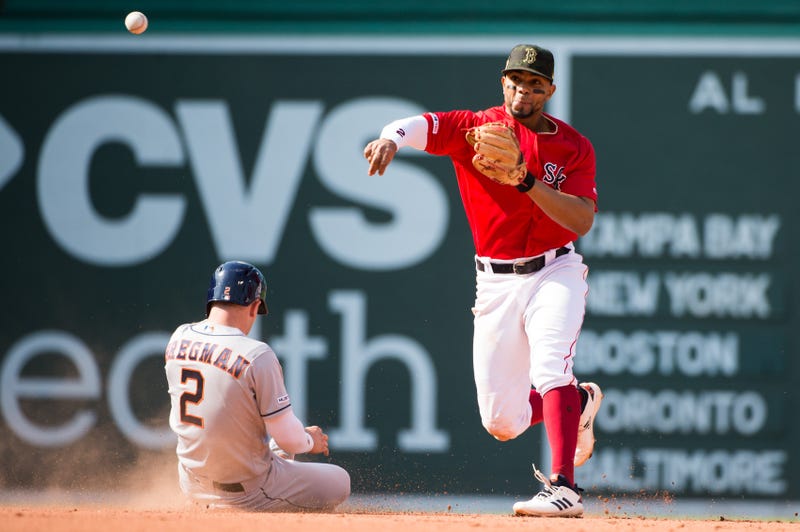 No. 2 Alex Bregman kicks up dust next to No. 2 Xander Bogaerts. Photo credit (Kathryn Riley/Getty Images)

You could practically make a full lineup of solid hitters here, with your power needs satisfied (Bregman, Davis, Smith), your speed and extra-base hits taken care of (Marte, Castellanos, Bogaerts, Villar) and a solid group of anchors toward the rear. 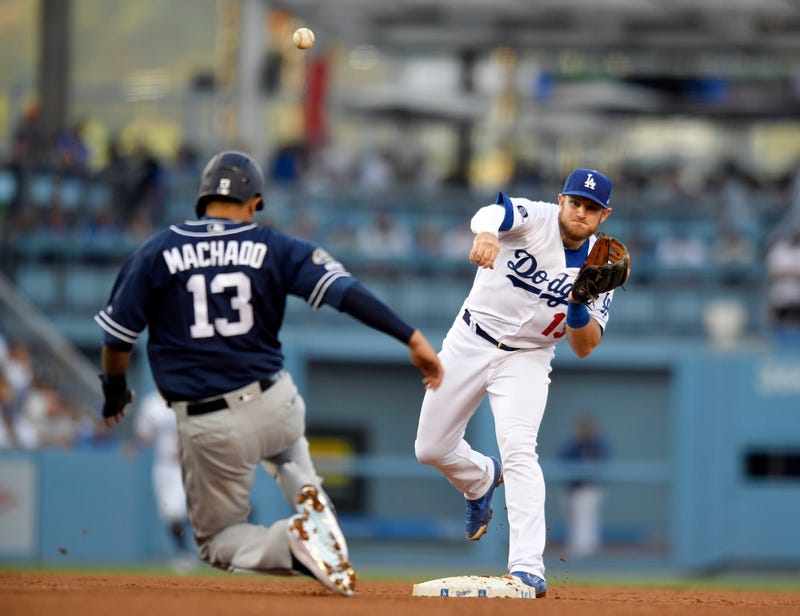 Acuna, Machado, Muncy and Gallo... man, oh man, what a due-up that would be. The depth behind them isn't all that impressive, but just the start of that lineup would be a near lock to do some serious damage. 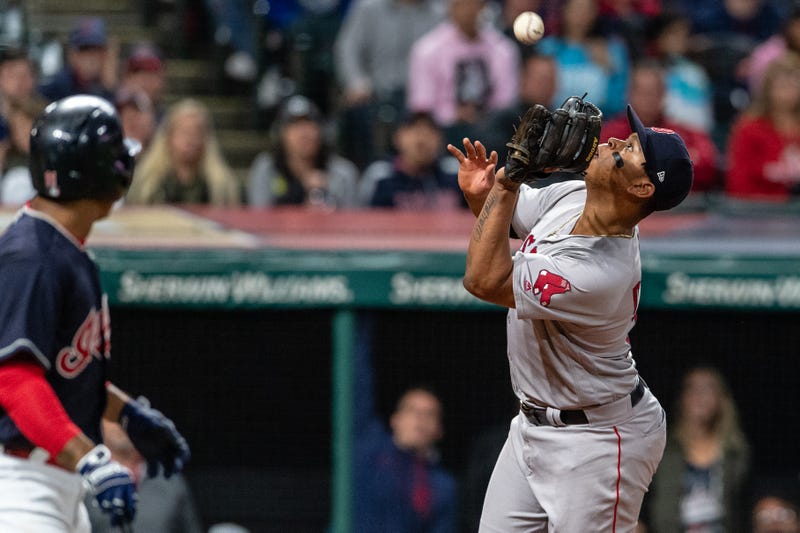 No. 11 Rafael Devers catches a pop-up off the bat of No. 11 Jose Ramirez. Photo credit (Jason Miller/Getty Images)

As Yu Darvish attempts to stay healthy, he fortunately has an explosive offense behind him on team No. 11. The Jose Ramirez bounce back already seems to be in full form (11-for-25, .440/.533/.760), while viral sensation Bo Bichette, 200-hit breakout Rafael Devers and 2019 first-time All-Stars DeJong and Polanco are all dangerous weapons. 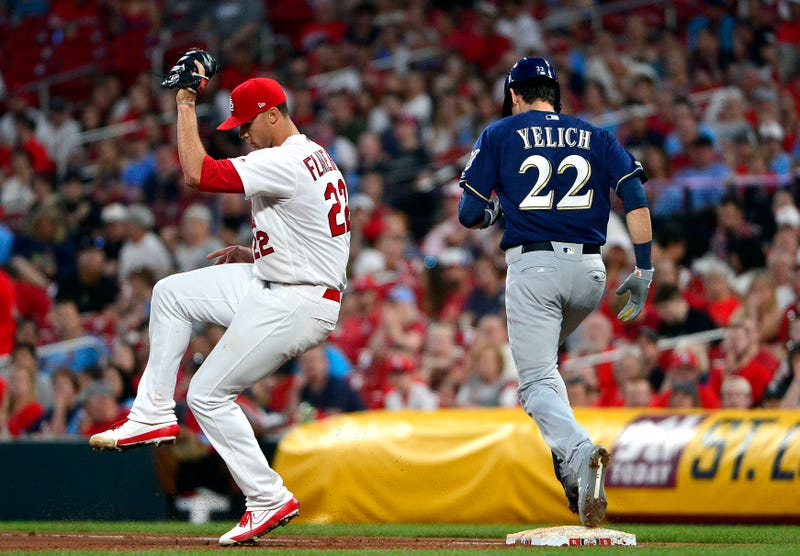 No. 22 Jack Flaherty reaches first a second before No. 22 Christian Yelich is able to touch the bag. Photo credit (Jeff Curry/USA Today)

While team No. 35 may have a 2019 MVP and Cy Young Award winner, team No. 22 had two real front-runners for those awards as the leaders of the team, though Yelich's start is anything but MVP-worthy (1-for-27, though it was a HR). Still, the combo of him and Flaherty is tough to ignore, while there is more than enough talent behind them at the plate and on the mound to battle for a top spot. 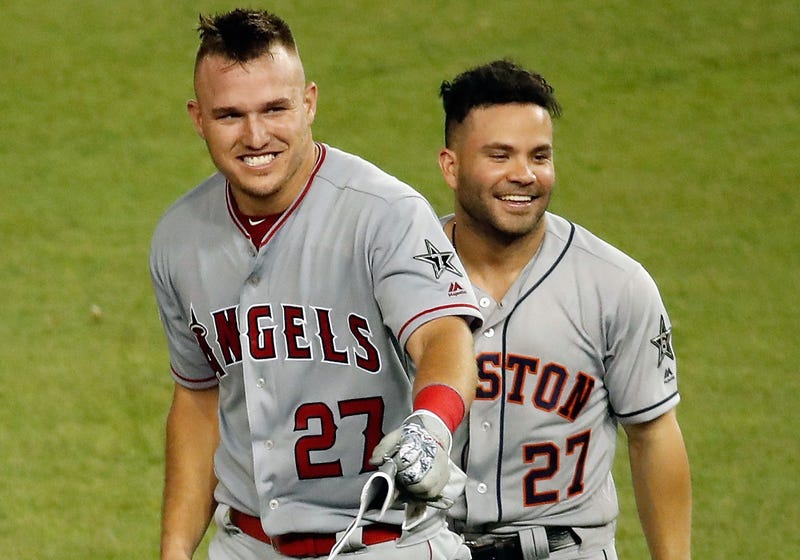 This is number one, and it's not particularly close. Trout, Altuve, Vlad Jr., Story and Stanton? That's literally an All-Star roster. And a three-headed monster of Nola, Giolito and Bauer on the mound? 27 reigns supreme.