In July of 2016, the New York Yankees and Chicago Cubs completed what history will view as one of the most impactful trades of all time.

Theo Epstein and Cubs acquired All-Star closer Aroldis Chapman, who would ultimately help them to snap a 108-year World Series drought. However, Chapman left in free agency after the season, returning to the Yankees on a five-year/$86 million free agent contract. In the meantime, the Yankees had also acquired a package of four prospects headlined by middle infielder Gleyber Torres. Though he's still only 23, Torres is already a two-time All-Star and looks as though he could be one of the best players of this era.

However, while Yankees' general manager Brian Cashman made a major trade involving a closer in 2016, it pales in comparison to one that was at least within the realm of possibilities in the summer of 1995.

Long before he trotted into Yankee Stadium with Metallica's "Enter Sandman" blaring over the speakers, Mariano Rivera was a starting pitcher. For as much longevity as Rivera would ultimately have, he didn't make his major league debut until 1995, his age-25 season. And his first four starts were rather disastrous, as he had a 10.20 ERA to show after his first quartet of appearances at the major league level.

What Rivera didn't know at this time is that he was at the forefront of trade discussions as then-Yankees' general manager Gene Michael attempted to acquire star left-handed pitcher David Wells from the Detroit Tigers. In Bill Pennington's 2019 book "CHUMPS TO CHAMPS: How the Worst Teams in Yankees History Led to the '90s Dynasty" Michael admits that while he hadn't signed off on a trade that would send Rivera to the Tigers, he was "certainly leaning that way."

At the time, it would have seemed strange to be hesitant not to include Rivera in a deal for Wells, who was an All-Star in 1995. Even if the Yankees felt that Rivera definitely had a future at the major league level, there was no indication it would be as a Hall of Fame closer. And Wells was a lefty that had already had success pitching in the American League East, having spent the first six seasons of his career with the Toronto Blue Jays. 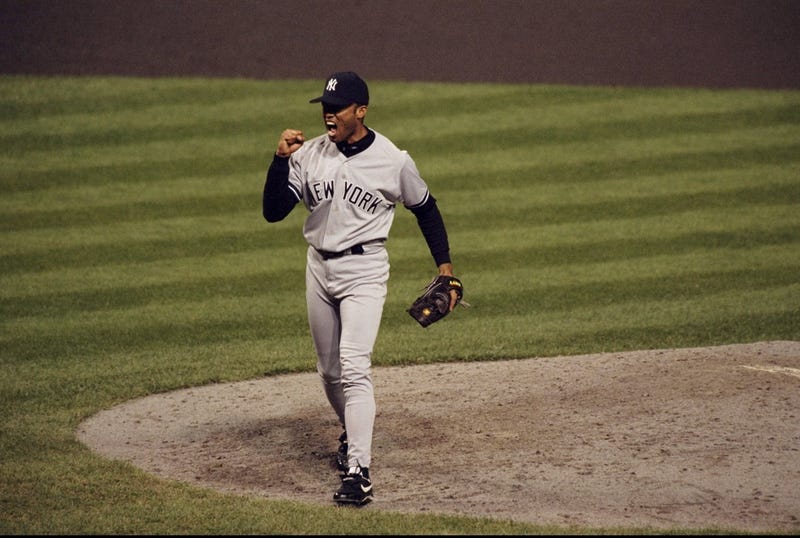 There's countless pitchers throughout MLB history that have a story similar to Rivera's, at least to start. However, after his fourth start with the Yankees, Rivera went on the injured list with shoulder discomfort and was ultimately optioned to Triple-A. Rivera dealing with a minor injury may have saved Michael from pulling the trigger on what would have been one of the worst trades in baseball history.

After his injured list stint, Rivera, back at Triple-A Columbus, pitched five perfect innings in his first start since recovering. Rain kept him from potentially getting to chase a perfect game, but after Michael was able to confirm that Rivera had increased his velocity to the mid-90s in his first start back, he told Dave D'Alessandro of The Newark Star-Ledger that he removed Rivera from consideration for the Wells trade.

This still wasn't the Mariano Rivera that would become the greatest closer in the history of baseball. First of all, he was still a starting pitcher. Secondly, he had yet to learn his cutter, which became one of the most unhittable pitchers in baseball history. But the hunch that Michael had that it would have proven to be a bad idea to trade Rivera ended up being career-defining intuition.

First of all, the Yankees would ultimately employ Wells a few years later. They signed him ahead of the 1997 season, and he would help the Yankees to defeat the San Diego Padres in the 1998 World Series. Earlier that year, he tossed a perfect game at Yankee Stadium. Wells would be used to acquire Roger Clemens from the Blue Jays ahead of the 1999 season, but he would return to the team from another successful two-season stint ahead of the 2002 season. Though they had to be patient, Wells would ultimately be part of four Yankees teams that won a combined 414 regular season games, two American League pennants and a World Series.

Secondly, Rivera would become a full-time reliever in 1996 and immediately became a star, posting a 2.09 ERA in 61 regular season games and finishing third in American League Cy Young Award voting. As the story goes, Rivera began to throw his cutter - which he would later refer to as "a gift from god" - during practice one day before the 1997 season and the rest is history.

Lots of relievers have one great season. And boy, the 1996 season was great. Rivera helped the Yankees to win their first World Series title since 1978, which is a lifetime in terms of that franchise. But the cutter gave him incredible longevity that allowed him to be a part of four more World Series winning teams, make 13 All-Star teams and become baseball's all-time leader in saves, a record he may never relinquish.

Wells wasn't dominant in Game 1 of the 1998 World Series, far from it really. However, he lasted seven innings, and while he gave up five runs, Chuck Knoblauch and Tino Martinez combined for seven RBIs, which ultimately set Rivera up for a four-out save. The Yankees would sweep the Padres, with Rivera inducing a ground out from Mark Sweeney for the final out of the World Series. Rivera would close out World Series victories in 1999, 2000 and 2009 as well, cementing his place as one of the most dominant pitchers in baseball history, one that never fired a pitch for a team other than the Yankees.

Historical Trade Rumors: The Barry Bonds to the Braves Deal That Was Scrapped

news
Barbie upgrades to a swank party pad in brand new DreamHouse
music
Read the just released FBI records related to Kurt Cobain’s death
i'm listening
How Nancy Wilson’s childhood experiences helped her mental health during the pandemic
music
Mike Epps on his U.S. Tour: 'It's time for us to get out and laugh'
music
Dropkick Murphys join the Boston Pops for a special Mother's Day tribute
music
Dierks Bentley stirs up the perfect summer recipe with second 2021 tour