On April 7, 2019, the Indians released a graphic of their lineup, and it wasn't too interesting to the casual eye.

I mean, it was well done graphically. The names were presented in a sleek fashion on the bottom-half of the image, though nothing was too unusual about the lineup. It was due to be Mike Clevinger's second start of the year, which was a big draw at the time considering he started the year off with a 7.0 inning, 12 strikeout masterpiece against the White Sox.

Thus, he was the centerpiece of the graphic, complete with his flowing hair and his big frame pictured immediately after firing a pitch. His left-arm tattoo sleeve is noticeable, and standing out in the ink is a big "Penelope" in script, referencing his first daughter. There's also a big, bright sunflower on his wrist, with Nicolas Cage's head in the middle. Further up his arm are mo- wait, what?

Just want to let you know that we hid Nicolas Cage in (39) of our lineup graphics last year.

We snuck it by you! You didn't even notice!

It's our greatest treasure.

Go on a scavenger hunt if you please. We will send master hunters a letter of congratulations. pic.twitter.com/4qq3BnSxBK

I bet you didn't notice that there the first time around. Apparently, this was one of just 39 cases in which Cleveland pulled this stunt, and no one noticed. You didn't even need special bifocals like Ben Gates did in National Treasure to find these, and we still missed them! For all the Nicolas Cage fans out there who like to embark on his sometimes-ridiculous adventures with him, we sure came up short on this one. 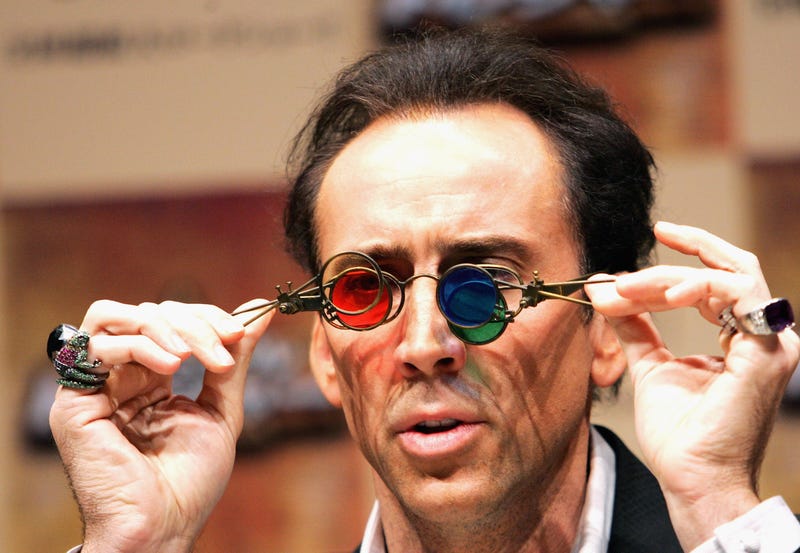 And now begins the madness of finding the rest of the 38. Here, we'll give you a head start on that:

How did I not see a single one of these?! Did I just think that Carlos Santana always had a little, ghostly Nicolas Cage hologram below his neck?