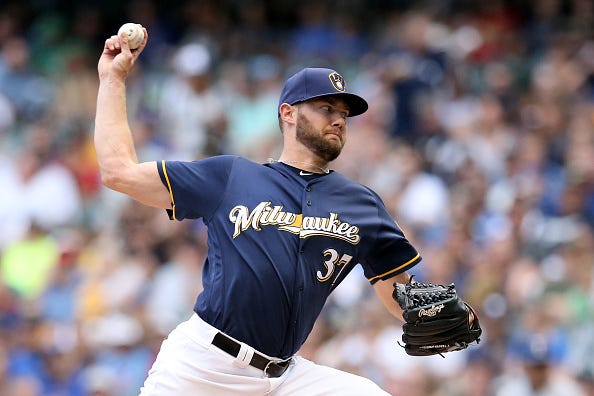 Adrian Houser is quite the hurler — in more ways than one.

The Milwaukee Brewers pitcher threw an absolute masterpiece to beat the Texas Rangers Saturday, but not before littering the field with some big league spew.

Houser, 26, started off strong, striking out the first two batters of the game. But after misplaying a grounder by Rangers shortstop Elvis Andrus, he appeared a little under the weather.

While tended to by teammates, coaches and the Brewers' training staff, he blew chunks near the mound.

Despite the apparent setback, he stayed in the game and pitched six innings, giving up just three hits and striking out a career-high 10 batters.

"I have no idea,” Houser told reporters when asked about what caused his temporary illness. But if I keep pitching like that, I’ll take it every time.”

#Brewers Adrian Houser knew the puke questions were coming but he pitched heck of a game tonight. pic.twitter.com/D1o1cpB93S

While tossing your cookies before tens of thousands of fans could be embarrassing, Houser has actually been down that road before.

After a stint in the minors last year, Houser was called up to join the Brew Crew as they took on the Philadelphia Phillies.

Before he even threw a pitch, he vomited on the mound twice, but remained in the game.

After facing two batters, it happened again. The grounds crew came out to water down the mess he left.

In an incredible show of resilience, however, Houser finished that inning.