It appears that if there's going to be a 2020 MLB season, one alternate plan may be emerging as the most likely contingency to have a baseball season and make sure to limit the spread of COVID-19.

Early last week, ESPN's Jeff Passan reported that baseball was considering a plan that would allow them to start the second part of the preseason as soon as the middle of May and have regular season games begin in early June or July, depending upon the execution of said plan. The plan would require all of MLB's 30 teams to be "sequestered at local hotels" in Arizona, where the entire league would play at least to begin the season. Though the plan got quite a bit of pushback, Passan says that he's been led to believe some variation of the Arizona plan may be the most likely if baseball is going to have a 2020 season.

"I think we're in a bit of a holding pattern," Passan said Monday to Mike Greenberg on ESPN. "Ultimately, if this is going to get done, it's not just major league baseball's choice - the players need to be on board too. And the MLB Players Association last week was sort of surveying among its members and getting their thoughts on a different variation of plans. There's, of course, the Arizona plan...there's one in Arizona and Florida, which is much less viable, both politically and functionally...and there was as Tim Kurkjian said a couple weeks ago, the thought that maybe we could just export baseball to Japan - I don't think that one is going to be happening. When it's all said and done, it seems like it's going to be Arizona or bust for major league baseball. And they have to get to the point with themselves where they say 'this is what we're going to try to do, even if we can't ultimately pull it off.'"

Though Passan wrote in his initial piece that some "high-ranking public health officials" believed that the Arizona plan had merit, it didn't fare as well in the court of public opinion last week.

The Arizona Diamondbacks play in Chase Field, a domed stadium. While that stadium would ultimately be used for more than just DBacks' games under this scenario, there's a reason the team plays indoors - the average high temperature in Arizona in July is 106 degrees. Under this plan, at least some portion of games would have to be played outside in Arizona in the dog days of summer, which feels sub-optimal. 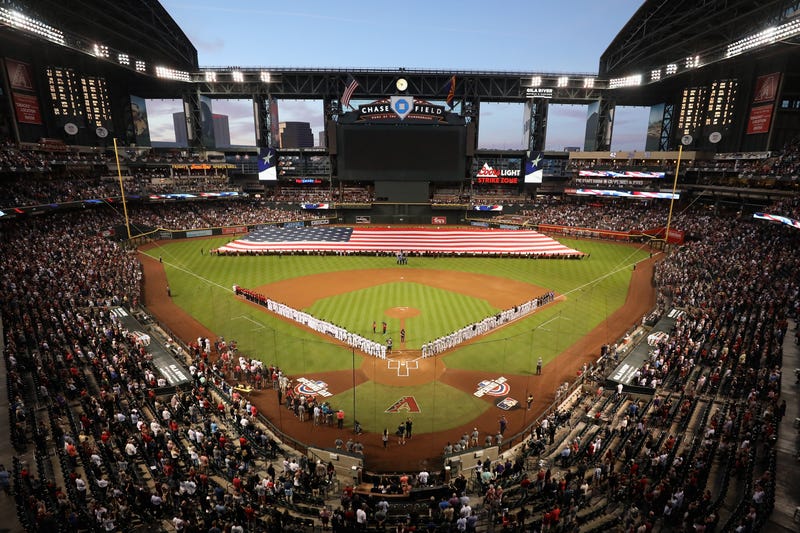 What's more, under this plan, players would be sequestered from anyone not on their team, similar to how you are when you are a juror in a high-profile court case. While they would still have access to their families via Facetime and other modern communication tools, players would be faced with not getting to see family, friends or anyone but their teammates in person for at least a few months. Some, like Atlanta Braves' lefty Cole Hamels, have said they would be willing to do that if it's the only way baseball is played in 2020. However, many more players have balked at such a concept. Philadelphia Phillies' righty Zack Wheeler, whose wife is pregnant with the couple's first child, says there's no scenario where he would miss the birth in July. Three-time American League MVP Mike Trout is also expecting his first child in August. As Passan said, there needs to be player buy-in on this plan, and it's hard to imagine that happening from here.

Without being cut off to the outside world, though, players would risk spreading COVID-19. It's also unclear whether the employees at the hotels players would be lodged at would be sequestered as well. Presumably, they would have to be for this plan to make sense. It's hard to know if there's a long line of hotels (and hotel employees) in Arizona willing to up-end their life for a few months to accommodate the MLB, even if they likely would be given a ton of financial incentive to do so.

Friday, RADIO.COM MLB Insider Bob Nightengale, writing for USA Today, unveiled another proposal for the 2020 season. Under this scenario, MLB would eliminate the National and American Leagues in 2020, and instead have divisions and leagues based around Spring Training homes. Those that play in Florida would be part of the Grapefruit League, and those that play in Arizona would be part of the Cactus League. Passan seemed to suggest that such a plan wasn't reasonable, and ultimately he may be correct in that, although there's no reason to believe the Arizona plan is fleshed out a whole lot better.

Passan did add that there is a hope that even if baseball has to begin the season sequestered in Arizona, things will stabilize in the country enough for teams to eventually be able to play games in their respective home ballparks in 2020.

"The hope is that this starts off as a biosphere and eventually we get to the point in this country...through testing and through antibody testing and through understanding through testing what exactly the Coronavirus is...that they can move beyond this biosphere and go back to their cities. And even though they will probably be playing in empty stadiums for the rest of the year, the idea is that this would be a two or maybe three-month thing, as opposed to a four or five or six-month thing that encapsulates the entire season. Now, of course, there is the possibility that it turns into that, but idealistically, they want to spend as little time as they can in Arizona."

Joe Buck Reveals Why You Think He Hates Your Favorite Team