Rob Manfred and MLB made it plain to see that they have no plans in taking action against the controversial tomahawk chop celebration at Atlanta Braves games.

In response, the National Congress of American Indians made it plain to see that they could not disagree more with how Manfred presented his defense of the chop.

Manfred was asked about the polarizing gesture prior to Game 1 of the World Series between the Braves and the Astros on Tuesday, and he was steadfast in supporting the job the Braves have done to maintain a relationship with the local Native American community.

When asked about whether or not Native American communities outside Atlanta might think differently, Manfred brushed that thought aside, using the league's marketing tactics as his defense.

"We don’t market our game on a nationwide basis," he said. "Ours is an everyday game. You have to sell tickets every single day to fans in that market. And there are all sorts of differences among the clubs, among the regions as to how the game is marketed." 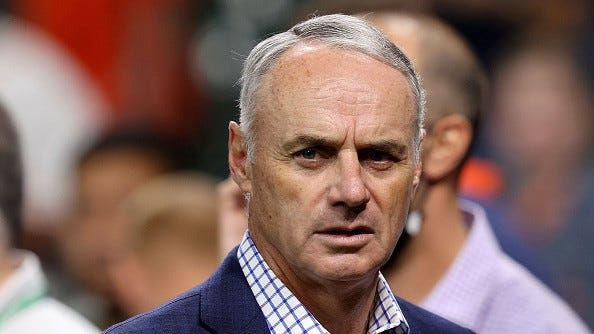 And that specific response — though his whole statement was called into question — was what drew the most heat from the aforementioned NCAI, who released their own statement following the commissioner's argument.

"Yesterday, Commissioner Manfred stated that the question of whether the 'Braves' mascot and 'tomahawk chop' fan ritual are offensive to Native people is only a local issue," the statement from NCAI President Fawn Sharp reads. "He similarly asserted the league does 'not market our game on a nationwide basis.' Nothing could be further from the truth.

"Major League Baseball is a global brand, it markets its World Series nationally and internationally, and the games played in Atlanta this weekend will be viewed by tens of millions of fans across the country and around the world. Meanwhile, the name 'Braves,' the tomahawk adorning the team’s uniform, and the 'tomahawk chop' that the team exhorts its fans to perform at home games are meant to depict and caricature not just one tribal community but all Native people, and that is certainly how baseball fans and Native people everywhere interpret them."

Stressing how the NCAI has made it categorically clear that they oppose Native American-themed mascots, Sharp continued with a call to action — one that we have heard before and that has caused change elsewhere, though not in Atlanta.

"NCAI calls on the team to follow the example set by the Cleveland Guardians," Sharp's statement says, "and we call on Major League Baseball and the FOX Broadcasting Company to refrain from showing the ‘tomahawk chop’ when it is performed during the nationally televised World Series games in Atlanta."

NCAI reiterates its longstanding opposition to the Atlanta @Braves' mascot and “tomahawk chop” fan ritual as the team plays in the @MLB #WorldSeries.