The Washington Nationals will be honored at the White House by President Donald Trump on Monday after defeating the Houston Astros in seven games to win the World Series, but at least one member of the team will not be attending.

Nationals closer Sean Doolittle is declining the invitation to the Oval Office, joining previous players and teams who have done the same after winning a title under the current administration.

Doolittle explained his reasoning in an interview with Jesse Dougherty of The Washington Post.

“There’s a lot of things, policies that I disagree with, but at the end of the day, it has more to do with the divisive rhetoric and the enabling of conspiracy theories and widening the divide in this country,” he said.

“My wife and I stand for inclusion and acceptance, and we’ve done work with refugees, people that come from, you know, the ‘s---hole countries,’” he said, referring to a comment Trump previously made about Haiti, El Salvador and some African nations in January of 2018. “At the end of the day, as much as I wanted to be there with my teammates and share that experience with my teammates, I can’t do it. I just can’t do it.”

Doolittle has taken particular exception to Trump's mocking of a disabled reporter during his 2016 campaign.

"I have a brother-in-law who has autism, and [Trump] is a guy that mocked a disabled reporter," he said. "How would I explain that to him, that I hung out with somebody who mocked the way that he talked, or the way that he moved his hands? I can't get past that stuff."

Trump attended Game 5 of the World Series at Nationals Park and was heavily booed by the home fans when he appeared on the jumbotron, while also receiving "lock him up" chants.

Doolittle is the only player on the team to publicly reject the invitation, but is following in the footsteps of many other athletes and teams from previous years. 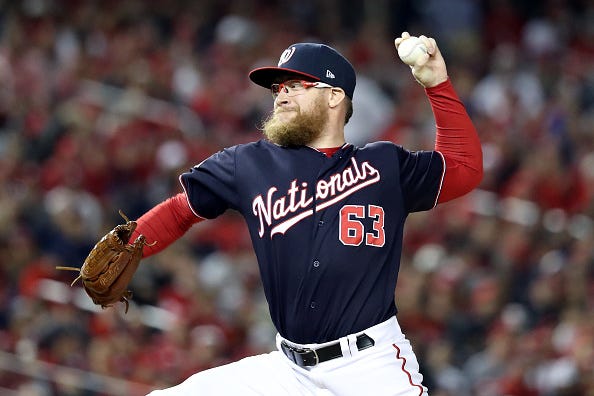 Several Boston Red Sox players, particularly those of color, rejected the invitation after winning the World Series last year. The Golden State Warriors and LeBron James pre-emptively have declined a potential invitation, and former NFL defensive end Chris Long rejected a White House visit twice, the latter coming with the Philadelphia Eagles, whose White House visit was cancelled after an overwhelming majority of the team felt the same way as Long.

Trump did host the St. Louis Blues after they won the Stanley Cup earlier this year, as well as the Clemson football team, whom he fed fast food during a government shutdown following the team’s College Football Championship victory over Alabama.

Some argue that an invitation to the White House should be attended out of respect for the office, but Doolittle offered a rebuttal to that point.

“People say you should go because it’s about respecting the office of the president, and I think over the course of his time in office he’s done a lot of things that maybe don’t respect the office,” he said. “The rhetoric, time and time again, has enabled those kind of behaviors. That never really went away, but it feels like now people with those beliefs, they maybe feel a little bit more empowered. They feel like they have a path, maybe. I don’t want to hang out with somebody who talks like that.”