The war between old and new school in baseball continues to rage on, with the “unwritten rules” of the game constantly being brought back into focus with each passing bat flip or home run celebration.

Noah Syndergaard, currently working his way back from Tommy John surgery, is tired of the complaints against the way many of baseball’s young stars play the game, and thinks the sport has gone soft in its rigidity to remain the way it was for decades before.

“I think baseball has gotten soft,” Syndergaard told GQ. “I think there should be some more sh*t-talking.”

Syndergaard is certainly no stranger to talking trash, getting into it on Twitter frequently, including just before the start of this season when he and Trevor Bauer were in a back and forth after Syndergaard called out Bauer for signing with the Dodgers after teasing the possibility of signing with the Mets. But Syndergaard sides with Bauer on many of his views about the state of baseball, particularly with comments Bauer made in support of home run celebrations after Fernando Tatis Jr. took him deep and closed one eye while rounding the bases, mocking Bauer after he pitched with one eye closed in spring training. 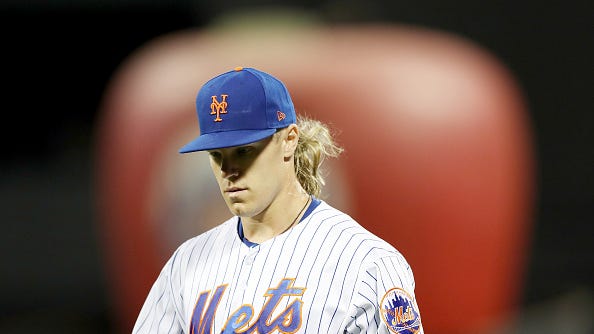 “I think it’s great for baseball, and the fans really enjoy it,” Syndergaard said of the celebrating in baseball. “I agree with what Bauer recently said. He gave up two home runs to Tatis, and Tatis heckled him pretty good. I think that’s awesome. I agree with Bauer, that does not warrant somebody to get thrown at.”

In previous years, Tatis’ celebrations would have resulted in being hit by a pitch in his next at-bat, which many who still side with the old school views of the game seem to clamor for. But Syndergaard thinks that’s the soft way of responding to being taken deep, and baseball’s unwritten rules aren’t actually written down for a reason.

Strut on 'em, Fernando: Tatis has something else for Trevor Bauer after hitting a second home run. pic.twitter.com/XNmlK71fdp

"I'm all for it. I think it's important that the game moves in that direction and we stop throwing at people because they celebrated having some success on the field." @BauerOutage on Fernando Tatis Jr.'s celebrations.

“I think they’re pretty stupid, to be honest,” Syndergaard said. “Anything unwritten sounds pretty stupid. I think it’s very old school, and I think there needs to be a new school approach.”

From Juan Soto’s spirited movements in the batter’s box to Bauer’s Conor McGregor-like strut after recording a strikeout, current players have injected new personality into the game, but have been met with resistance by many fans and former players or coaches around the game, but it’s clearly a new age of baseball. The league itself has tried to embrace it with its “let the kids play” rally cry, and Syndergaard is in that camp, wanting to see more personality in a game that has been plagued by the “act live you’ve been there before” mindset for decades.

“It’s fun, but we’re also competitive beings competing at the highest level,” Syndergaard said. “So we’re always looking for a way to get the edge on our competition, whether it’s to distract him in some form or fashion...it’s exciting. People are able to see both of our personalities.”