A finalist for this year’s National League Cy Young Award (which he won in both 2016 and ’17), Dodgers ace Max Scherzer figures to be among the most sought-after talents in a loaded free-agent class. The certain Hall-of-Famer has banked over $139 million in career earnings and, despite his age (37), should be in line for another monster payday this offseason. In fact, Jim Bowden of The Athletic predicts whoever he signs with (Bowden identified the Dodgers, Giants and Angels as Scherzer’s “best fits”) will make him the highest-paid player in MLB history.

While Scherzer won’t top Mike Trout’s historic $426-million windfall from Anaheim, Bowden believes he could earn up to $50 million annually on his next deal, easily surpassing the high-water mark set by Trevor Bauer last offseason (his three-year, $102-million contract includes salaries of $40 million this year and another $45 million in 2022).

Scherzer ran out of gas in the playoffs, logging just 4 1/3 innings in the Dodgers’ NLCS loss to Atlanta, but the 6’3” hurler was magnificent before that, going undefeated with a 1.98 ERA in 11 starts after being acquired at the trade deadline this summer. MLB’s active leader in career strikeouts (3,020), Scherzer has started three of the last four All-Star Games including this year’s Midsummer Classic in Denver.

Returning to L.A. would make plenty of sense—clearly Andrew Friedman isn’t worried about going over the luxury tax threshold ($210 million) and the Dodgers would give Scherzer arguably his best chance to win another World Series. Of course, with Machiavellian agent Scott Boras pulling the strings, who knows where Scherzer’s free-agent journey could take him.

Other heavy-hitters in this year’s free-agent class include a trio of All-Star shortstops (Carlos Correa, Trevor Story and Corey Seager), Blue Jays slugger Marcus Semien (an AL MVP finalist two of the last three seasons) and former National League MVP Kris Bryant. This offseason will obviously be complicated by CBA negotiations with many expecting a work stoppage next month. 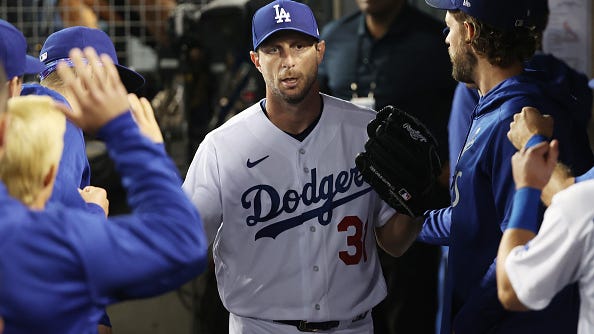