While there are plenty of Hall of Fame arms and backstops below, being enshrined in Cooperstown doesn't grant you automatic entry onto this list. It's a dual effort that's needed here, and that just wasn't the case for many Hall of Fame careers.

Nolan Ryan made 773 starts over the course of his 27-year career, but never threw to the same catcher more than 150 times. Alan Ashby led the way with 136 games as Ryan's backstop, and his production wasn't anything to write home about. The rest of the list is composed of names like Terry Humphrey, Mark Bailey, Jerry Grote... no one that screams out as a key piece of a devastating pitcher-catcher duo. Ryan did have Hall of Famer Ivan Rodriguez behind the plate for 44 of his starts, but they came at the end of his career. Neither the longevity nor the production that's needed to make this list was there at this point.

So, as terrifying as a duo of Ryan and Rodriguez sounds on paper, it really wasn't all that scary at the time.

The ten pairs you'll see below consist of two players, both of which were regarded as top-tier players at their positions during their careers, and who teamed up to form a battery for a significant portion of their careers. These stats were made available thanks to incredible research done by Walt Wilson of the Society of American Baseball Research, High Heat Stats, and, as usual, Baseball Reference.

While Greg Maddux was the best pitcher on the Braves pitching staff, almost indisputably, he preferred to throw to Eddie Perez behind the plate. Javy Lopez, who was much more dangerous an offensive weapon than Perez, served just fine as the backstop for fellow Hall of Famer Tom Glavine, though, and the duo competed in 248 games together, a top-10 figure in MLB history (via High Heat Stats).

Lopez wasn't great defensively, but we're sure Glavine didn't mind the run support that the Silver Slugger would provide -- take his 34-home run 1998 season, for instance. And Glavine didn't find Lopez's catching a distraction, either, as he won the Cy Young award in that same year and finished in the top three in voting two other times while Lopez was responsible for framing his pitches. 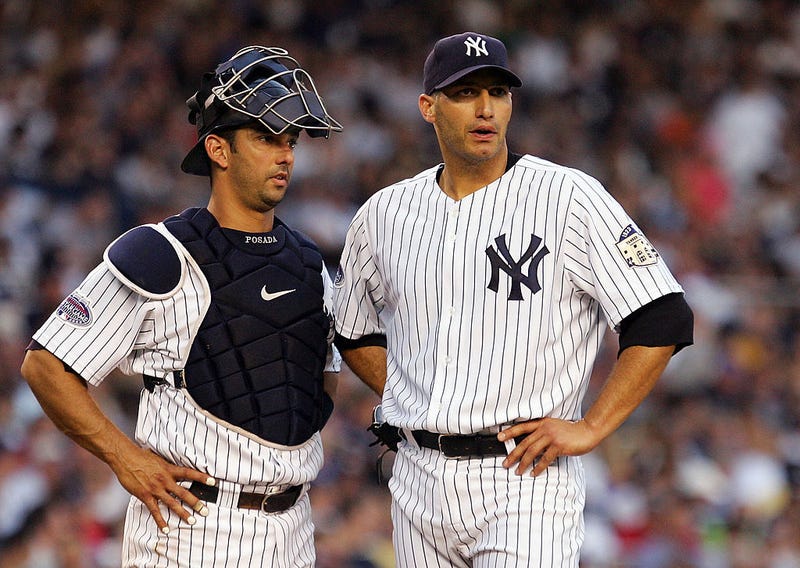 Though it's not unlikely that neither one of these Yankees greats ends up enshrined in Cooperstown, they did combine for eight All-Star selections and won four World Series rings together (1998-2000, 2009). Over the 13-year span during which they were teammates -- which actually extends further, considering they first formed a battery with the Oneonta Yankees -- they had several memorable moments together. In fact, Mike Bertha of Cut 4 compiled a list of five momentous pitches Pettitte threw while Posada was behind the plate.

According to Elias Sports Bureau, the duo's record as a starting battery was an extremely impressive 100-51 (via SI.com).

Though Tim McCarver caught Bob Gibson more than any other catcher, setting up behind the plate for 197 of Gibson's games, he left a void when he was traded to the Phillies before the 1970 season (via SABR). That's where 2020 Hall of Famer Ted Simmons stepped in. Over the next six seasons, he caught the bulk of Gibson's starts, including 14 shutouts and a no-hitter against the Pirates in 1971. Simmons happened to rake in that game as well, going 4-for-6 and scoring three runs. It was a nice little microcosm of the dominance that this duo was capable of.

It's rare that you'll see two Hall of Famers come together for so many games, even if it was just after Gibson's peak.

The end of the Roy Campanella era meant that one of the greatest catchers in MLB history was leaving behind big shoes to fill. Roseboro wasn't quite the same player that Campanella was -- after all, few catchers have been -- but he did step in and provide offense and defense right off the bat, earning six All-Star nominations.

Whereas Campy caught 18 games from Koufax, Roseboro caught 28 shutouts from Koufax in 208 outings total. Though he wasn't on the receiving end of Koufax's 14-strikeout perfect game -- that was Jeff Torborg -- he did call the game for two of the Hall of Fame hurler's no-hitters. In addition, he was behind the plate during Koufax's masterful 15-K World Series outing (via MLB Film Room). 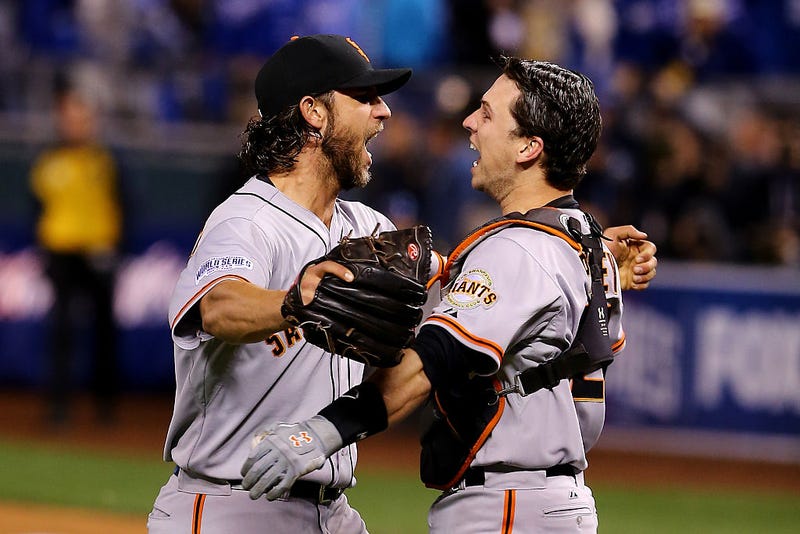 The most recent pairing to appear on this list is also one of the most successful. If there was ever a dynasty in post-2010 baseball, it was the San Francisco Giants, picking up three rings in the first five years of the decade thanks to the leadership and MVP-caliber play from Buster Posey, and the ice-cold mentality of Madison Bumgarner.

Playing together for a little over a decade, MadBum could always rely on the fact that his preferred catcher certainly wasn't weighing the lineup down -- Posey has picked up four Silver Slugger awards -- and Posey knew that there was no better option in a big game than Bumgarner.

And just like how Bumgarner could count on Posey's defense, Posey could count on Bumgarner's offense. The duo made history in 2014 when they both clobbered grand slams against the Diamondbacks, becoming the first batter-pitcher battery to do so.

The battery that saw more action than any other was this Detroit duo, spanning 13 seasons and racking up a whopping 324 games (via High Heat Stats). Unlike many other duos on this list, it may have been the backstop who was the more highly acclaimed player, as Freehan landed on the AL All-Star team 11 times throughout the '60s and '70s. Lolich made just three appearances.

Both their longevity and their All-Star status for years and years makes this formidable, yet not quite Hall of Fame-worthy, duo one that Tigers fans look back upon fondly.

28 combined All-Star selections made this duo one to be reckoned with year in and year out. And their longevity is second to... well, it wasn't second to none, as the 316 games in which Crandall caught for Spahn is second to Lolich and Freehan.

Spahn got a small sample of tossing to Crandall in 1949 and 1950 before the backstop served two years in the military. Spahn led the league in wins in both '49 and '50, did not lead the league while Crandall was out of action, and then led the league once again in 1953, the first year of their reunion. Coincidental? Perhaps, but a pretty cool coincidence if so.

Crandall picked up four Gold Glove awards as well as being an extremely reliable game-caller for Spahn, whose Hall of Fame career ended with 363 wins, the sixth-most in league history. Crandall also caught both of Spahn's no-hitters (via SABR).

When two players form a pitcher-catcher duo that spent over a decade together and brought home five rings, there's either a) a really special connection, or b) an insane supporting cast. In the case of Lefty Gomez and Bill Dickey, both are true.

Because yes, they were able to play alongside Babe Ruth, Lou Gehrig, Joe DiMaggio, Tony Lazzeri, Red Ruffing and some other all-time greats throughout their years together. But Gomez and Dickey were also deserving Hall of Famers in their own right.

Gomez led the league in shutouts and strikeouts three times each, and his contribution to the team still holds up today using advanced metrics like Base-Out Runs Saved. Dickey, on the other hand, was the premier catcher of the late 1930s, clubbing at least 20 home runs and driving in over 100 runs in four straight seasons, and finishing his career with a very respectable slash line of .313/.382/.486. 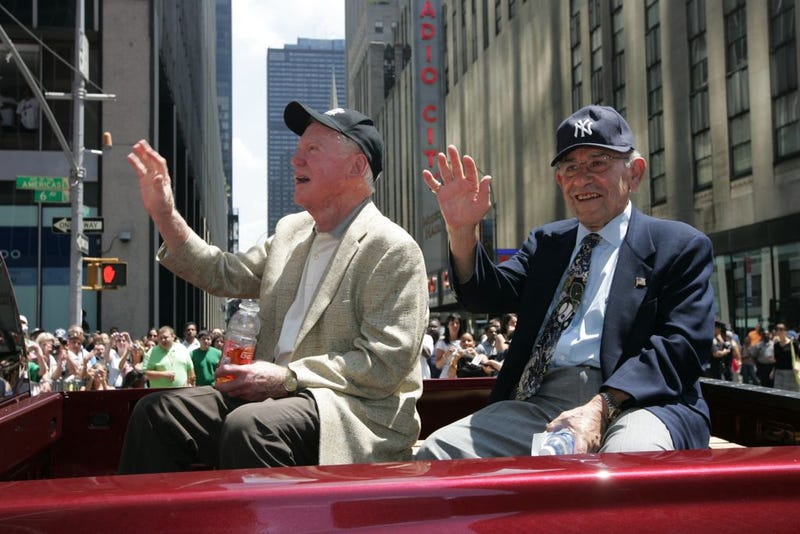 Whitey Ford (left) and Yogi Berra sit in the back of a car during a parade. Photo credit (Mike Stobe/Getty Images)

It seems like every list I write involving some historical aspect of baseball is inundated with the Yankees. It's just an unfair franchise. As if Gomez and Dickey weren't good enough, the New York fan base was treated to yet another decade of an unforgettable pitcher-catcher battery in Ford and Berra.

Ford also pitched 179 outings to Elston Howard, but Berra was on the receiving end of over 30 more games (212 total). Berra was also on the receiving end of several postseason outings from Ford which ultimately manifested in not one, not two, not three, not four, not five, but SIX rings. By the way, that's only 60% of Berra's total ring accumulation, but that's beside the point.

Still, one duo of Hall of Famers proved to be even more impressive than this one, despite lesser name recognition.

1930 may be the best season a pitcher-catcher battery has ever had. And no, this isn't the season in which Cochrane won the MVP award (1928), nor is it the year in which Grove took home the hardware (1931). But, as you can see, those years weren't too shabby either.

Try and tell me that there was a better duo than that one. I'm waiting.