The Korean Baseball Organization has been the saving grace for several baseball fans over the past week. After ESPN decided to broadcast games, fans yearning for a return a baseball, sports betting or just some sort of live sports action enjoyed tuning into the league. If anything, it's been a fun diversion while MLB mulls over the best course of action to take regarding a safe and practical return to baseball.

Unfortunately, KBO may soon have to make similar decisions regarding the health and safety of their players after another spike in cases seems to be emerging in South Korea.

Recent spike in new COVID19 cases are making #KBO officials nervous. 2nd wave might be on its way and CDC/local gov’t officals are scrambling to contain new spread. KBO initially hoped to have the fans at games by early June, but that plan is not looking good now. https://t.co/ATWJsB2JKL pic.twitter.com/iV5Kd3r9K8

Kim's tweet surfaced out of an initial report from journalist Jen Moon in which she shared that South Korea was responding to a new wave of cases.

NEW: South Korea postpones reopening of schools by one week as health authorities scramble to contain new spike in #COVID19 cases linked to nightclubs in Itaewon

KBO had not allowed any fans into attendance -- real, living fans, that is -- in the first week of play, but had been eyeing a date in June according to Kim's report. 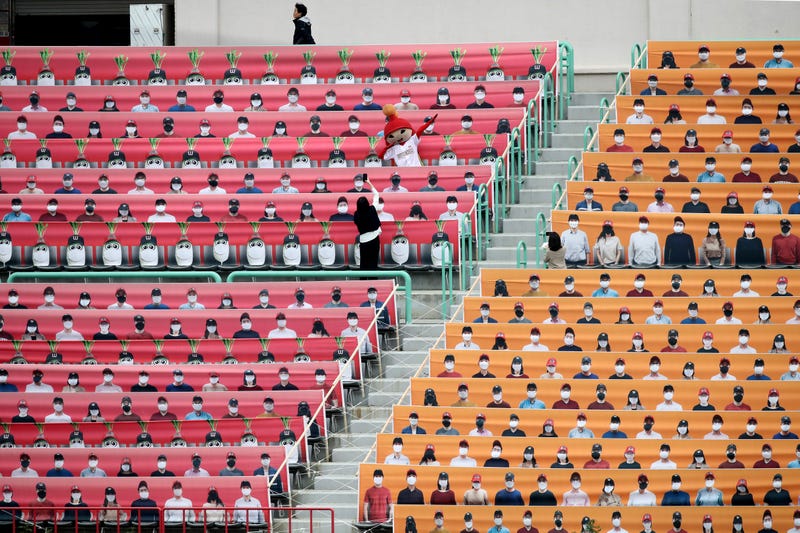 Instead of real fans, KBO "fans" were placards placed throughout the stadium. Photo credit Getty Images

The league has taken significant precautionary measures to ensure that the players and faculty are safe during this time. Among those are a three-week league shutdown if any member of a team tests positive for coronavirus at any point, the prohibition of high-fiving and chewing tobacco, and the required wearing of masks and gloves at training facilities.

However, should a severe spike of cases emerge from the trajectory shown above, league officials will not only undoubtedly reroute their plans to return fans to the stadium, but will also have to re-evaluate whether or not it's safe for the league to carry on given the surrounding health conditions. Should a legitimate resurgence in cases occur, it will provide the KBO, MLB, and sports leagues around the globe a reminder of the extreme volatility of the pandemic.

Up to this point, the KBO season had been successful. Kim appeared on 93.7 The Fan in Pittsburgh last week and said that the league is off to a good start and that baseball has been "very comforting" as a way to get away from the difficulties that we're all facing during this pandemic.