New Los Angeles Dodgers pitcher Trevor Bauer denied that he was ever intentionally toying with the New York Mets fan base after a merchandising glitch on his website caused an uproar, and you can choose to believe that or take his apology with a grain of salt. 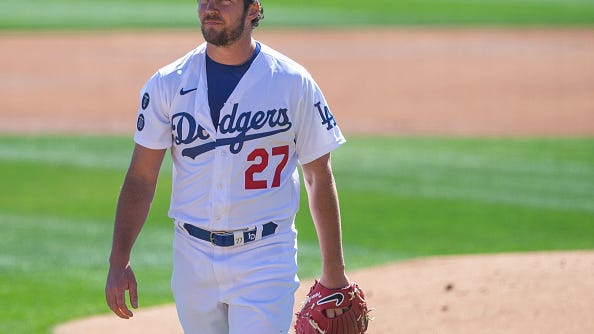 Trevor Bauer told agent he was signing with Mets after merch mishap: 'It's f—ing over'

But he sure didn't deny that he was having a little bit of fun with the San Diego Padres in a spring training game on Saturday afternoon, making his second start of the season and tossing three scoreless innings.

Trevor Bauer striking out people with one eye closed. 😳 pic.twitter.com/heHkxVPdL7

“I figured if they can’t score off of me with one eye open, it will be difficult to score off me with two eyes open,” Bauer said following the outing (via Mike DiGiovanna of the Los Angeles Times). “Just having a little bit of fun. There’s definitely a reason behind it.”

What that reason was wasn't something he was willing to divulge, though he says that closing one eye helps to strengthen the other.

“I like making myself uncomfortable and throwing different stuff my way and trying to find a solution for it,” Bauer said. “That’s how you improve. Find a way to make yourself uncomfortable, then get comfortable with it and do it again.”

Perhaps the reasoning behind his one-eyed madness on Saturday, however, was so that he could compare himself to one of the most beloved fictional pirates in history. Actually, according to Ranker.com, he is the best pirate character in a film.

We're talking about "Pirates of the Caribbean" protagonist Jack Sparrow, of course, and Bauer made sure to include the memorable soundtrack in his highlight reel as well.

If you’re like me, you couldn’t quite see what happened today, so here’s a recap. 🏴‍☠️ pic.twitter.com/WrPQJbzmrv

It's not quite Michael Jordan taking blind free throws, but it's pretty darn impressive.

Will he ever break this tactic out in the middle of a regular season game? Doubtful. But with Bauer, we can never be too sure. And if he's throwing pitches like this, why not?