When you score 48 points in arguably the largest stage that international basketball has to offer — the Olympics — some pretty good things will happen. Your team will, in all likelihood, come away with the victory. Your teammates and coaches will celebrate you with unmatched enthusiasm, and the same can be said for the fans. Even opposing players will watch in awe and put their pride aside to acknowledge what they just witnessed.

And opposing coaches — at least in the case of Argentina's Sergio Hernandez — could have the highest praise of all. After Slovenia's Luka Doncic went off for that aforementioned 48-point game in an Olympic victory, the Argentinian coach had just about the highest level of praise for the 22-year-old there is. 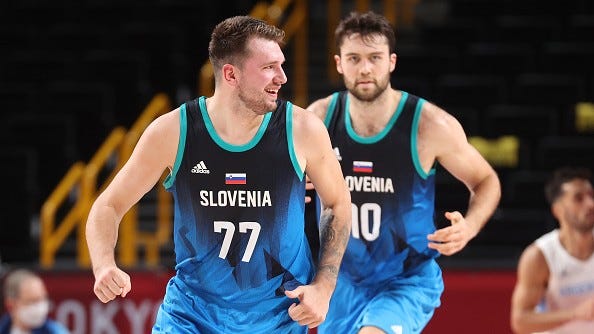 "He just destroyed us," Hernandez said. "We tried everything we would've tried with a normal player, but he is not a normal player. He is the best player in the world, including the NBA. If there was any doubt in my mind, it is there no more."

All Slovenian coach Aleksander Sekulic could do was agree. And is it really that crazy a statement? No, Doncic didn't win the NBA MVP award — that honor went to Nikola Jokic — but the Mavericks star has been named a first-team All-NBA selection in both of the past two seasons. That's tough to do, seeing as the five names that make the cut can pretty reasonably be considered the five best players in the world. And though some other NBA stars have struggled in the Olympics, mainly those on Team USA in their surprising loss to France, it appears that Doncic is doing just fine.

Of course, some will disagree that Doncic is the single, unrivaled best player in the world. There are more than a few contenders, including LeBron James, Stephen Curry and a certain someone who only scored 10 points for Team USA in their loss. But again, you probably won't find all that many people who would argue against his advocates, like Skip Bayless, either.

Argentina's coach says Luka Doncic is the best player in the world. I will take Kevin Durant over Luka any day or night.

Considering Doncic is only 22 years old, which is a mind-blowing factoid in itself, it's even crazier to think about just how incredible he can become with a few more years of experience and growth under his belt. Watch out world.