What’s in a name? Everything. Nicknames are a badge of honor, a mark of acceptance and appreciation. But mostly they’re a delight, a colorful way to express our undying love of sports and the characters that drive its action. Charles Barkley may not have a ring on his finger but he’ll always be the Round Mound of Rebound (or Sir Charles, if you prefer) to his devoted fan base.

When it comes to nicknames, the more ostentatious the better. You know you’ve struck nickname gold when your basketball moniker becomes such a part of your identity that people need to Google your actual birth name. For instance, does anyone outside the small bubble of 90s hoops diehards know Jerome Williams by any other name than Junkyard Dog? And can you blame them? You can’t exactly go back to “Jerome” once the masses start calling you Junkyard Dog. That’s a forever nickname.

Narrowing the field down to 25 names was near-impossible (henceThe Deer Hunter-length list of honorable mentions you see listed below), but after sorting through a treasure trove of worthy contenders, the stage has finally been set. Welcome to nickname royalty, ladies and gentleman. You’re in the presence of kings. Act accordingly.

Rafer Alston: Skip to My Lou

The best nicknames on the AND-1 Mixtape Tour could be a whole separate article—Hotsauce, Spyda, The Professor, Escalade. But Alston, the only player (to my knowledge) to successfully make the leap from streetball to the NBA, warrants at least some recognition. The crossover-happy point guard was more journeyman than lineup staple, suiting up for six different franchises (his longest stay was a four-year stint in Houston) over the course of an 11-year NBA career. The hoops hall won’t be saving a space for Alston in Springfield, but as a playground pioneer with swag for days, Skip to My Lou (or its alternate spelling, Skip 2 My Lou) will always be a legend in my book.

Be honest, how many of you knew Birdman’s actual name before now? Andersen was hardly an offensive force—his 5.4 career points per game average doesn’t exactly scream “Buckets.” But the 6’10” enforcer certainly made his presence felt with his flashy hairstyles (a gel-drenched Mohawk seems to be his preferred look) and equally eccentric tattoos. There’s nothing particularly avian about Andersen or his game (his mystifying botch job in the 2005 Slam Dunk Contest set the sport back years), but thanks to his Lynyrd Skynyrd-inspired neck tat, the Blinn College alum will forever live on as Birdman. Wings up. 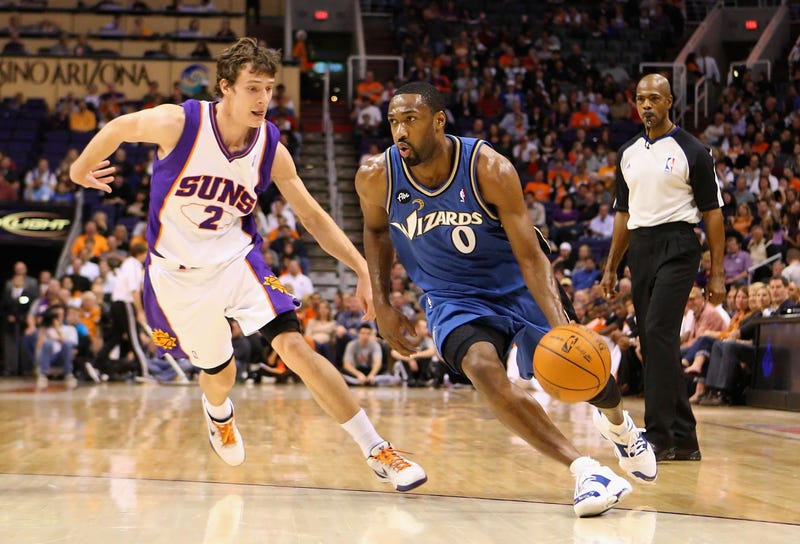 Arenas, a three-time All-Star with the Washington Wizards, delivered plenty of on-court theatrics (and just as much controversy) over the span of his 11-year playing career. A fan favorite who could light up a gym with his considerable scoring prowess (he averaged a shade under 21 points per game for his career), Arenas’ swag could not be contained by a single nickname, which is why he also went by Hibachi (a reference to piping-hot Japanese cuisine) at the height of his NBA powers. Agent Zero, of course, is a nod to Arenas’ preferred uniform number. The genesis of that unusual number choice speaks volumes about Arenas’ underdog mentality. An unheralded second-rounder tapped by many as a future NBA flop, Arenas selected zero as a clever nod to the number of minutes experts predicted he would log at basketball’s highest level. They were only off by 19,351.

Charles Barkley: Sir Charles and The Round Mound of Rebound

Not a role model in the slightest, the outspoken, highly quotable Barkley was appointment viewing during his 90s heyday with the Phoenix Suns, one of the many combatants Michael Jordan’s Chicago Bulls would face on their remarkable path to six titles in an eight-year span. Basketball Reference lists the Hall of Famer at 6’6” and a husky 252 pounds, but don’t buy into that baseless propaganda. We all know Chuck (who was probably closer to 6’4”) was pushing three bills. But to Barkley’s immense credit, the portly power forward didn’t let his stocky physique obscure his path to NBA greatness. Barkley’s broken golf stroke is beyond repair but the former league MVP can still wolf down pies with the best of ‘em.

As coldblooded as they come, there was a reptilian quality to Bryant’s on-court demeanor, a ferocious, win-at-all-costs mentality that made him among the most feared competitors of his era. Kobe was an assassin in Nikes, a dream-ruining, late-game conqueror conditioned to lull opponents into a false sense of security, only to ruthlessly rip their hearts out at the last second. Love is cruel but Bryant’s signature fade-away was crueler. Kobe’s intimidating Black Mamba moniker even inspired a spinoff nickname of sorts with fans rebranding former Celtics benchwarmer and current RADIO.COM podcaster Brian Scalabrine as the White Mamba. Bryant’s fatal helicopter crash rocked a generation of hoops fans to its core earlier this year, but as countless tributes in the following months would attest to, the Black Mamba’s legacy lives on.

What a delightfully cheerful nickname for a loose cannon like Cousins, a referee-bludgeoning havoc-wreaker with a Rasheed-esque penchant for technicals (as his 14 career ejections would attest to) and a legendary lack of chill. We haven’t seen much of the zebra-provoking Cousins lately—injury detours have temporarily taken the free-agent big man out of circulation. But it’s only a matter of time until the tantrum-prone 29-year-old resurfaces. For some, the nickname may conjure images of Roller Girl and Dirk Diggler strutting their stuff on the dance floor in San Fernando Valley (is the Kentucky alum secretly a Paul Thomas Anderson stan?), but to me “Boogie” will always be synonymous with low-post dominance and a compulsive need to spar with the whistle-clad fraternity of NBA officials.

Davis was, to put it bluntly, a hot mess throughout his memorable, eight-year NBA tenure. And that’s what was so compelling about Big Baby, a surprisingly nimble 289-pounder with considerable big-game savvy. The tongue-rolling, saliva-dripping emotional rollercoaster suited up for the Magic and Clippers later in his career but he’ll always be best known for his four-year stint as a Boston Celtic, which included two Finals appearances, one title and a baseline buzzer-beater to stun Orlando during the 2009 playoffs. 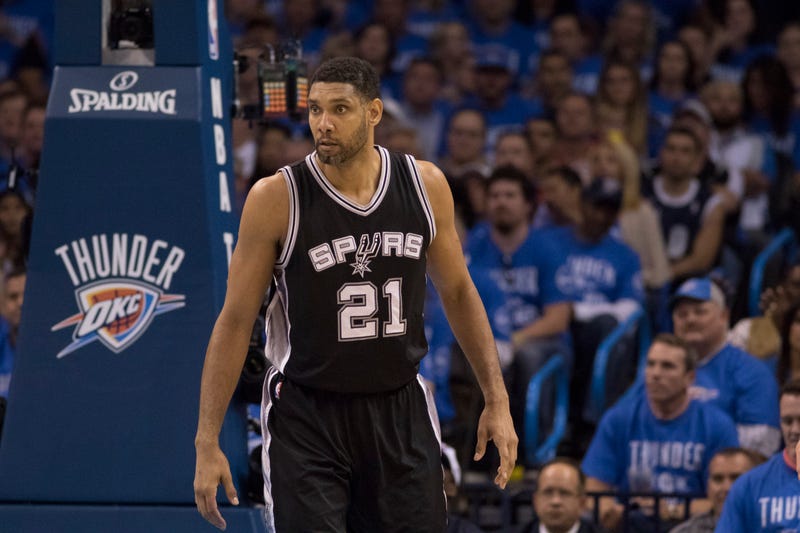 Shaquille O’Neal’s greatest NBA contribution, aside from his four championships, countless All-Star appearances and 28,596 career points, may have been his affinity for coining nicknames with “The Truth” (a title bestowed on Celtics legend Paul Pierce) and Tim Duncan’s “The Big Fundamental” among his many creations. Never the chattiest of superstars, the stoic Duncan earned every conceivable individual accolade throughout his magnificent 19-year career, building his legacy on a rigid adherence to the sport’s fundamentals. The Spurs lifer may have lacked flair, but his no-frills, by-the-books MO was no doubt effective, culminating in five titles, 15 All-Star nods and his eventual enshrinement in Springfield.

The literal centerpiece of Sam Hinkie’s abandoned “Process,” a painstaking rebuild that helped morph the laughingstock Sixers from Eastern Conference doormats to a perennial playoff team, Embiid’s career has been a slow burn, seeing the seven-footer develop from an injury-prone up-and-comer in his early years to the low-post titan he is today. Philadelphia’s grand NBA experiment, the result of many lean years in the cheesesteak capital (Hinkie’s shameless tanking even forced the league to revisit its lottery system), has yet to be realized, but if the long-suffering Sixers do reach the summit, it will be on Embiid’s broad shoulders. The Process will forever be Embiid’s calling card, though, as evidenced by recent events, the 26-year-old isn’t opposed to trying other nicknames on for size.

Hamilton, a fixture on the juggernaut Pistons of the mid-2000s, never qualified as a superstar per se, but the instinctive two-guard was an expert at all the little things, mastering the mid-range J (a forgotten skill in today’s three-point happy NBA) while frustrating defenders with his mind-blowing ability to get open. A lockdown defender who endeared himself to fans by sporting his trademark Jason mask (the result of a twice-broken nose), Rip had his No. 32 raised to the rafters in Detroit shortly after the conclusion of his standout 14-year career, most of which was spent in the Motor City.

A decorated college performer at UNC, Hansbrough didn’t enjoy a particularly distinguished NBA tenure (6.7 career points per game), but his lunatic intensity and signature scrappiness earned him one of the sport’s better nicknames. One of the great college hoops antagonists not just of his era but of all-time (he finished runner-up to legendary Duke heel Christian Laettner in Grantland’s 2013 bracket counting down the most hated college players of the last 30 years), the heart-on-his-sleeve Hansbrough relished his villain status in Chapel Hill, and so did all of us.

Irving, an admitted flat-Earther who did his darnedest to try and sideswipe the NBA’s restart (he wanted to start his own league at one point), has gone off the deep end in recent years, developing a reputation as a high-maintenance locker-room headache with a lust for chaos. But when he’s not injured or twisting the knife on teammates and coaches, Uncle Drew, who earned his nickname by going undercover as a jumper-draining geriatric in a series of well-received Pepsi ads, is still an upper-echelon NBA point guard with championship pedigree. His title-sealing three to slay the mighty Warriors (who squandered an immaculate 73-9 regular season en route to one of the league’s all-time collapses) in 2016 will forever live on in Cleveland sports lore. 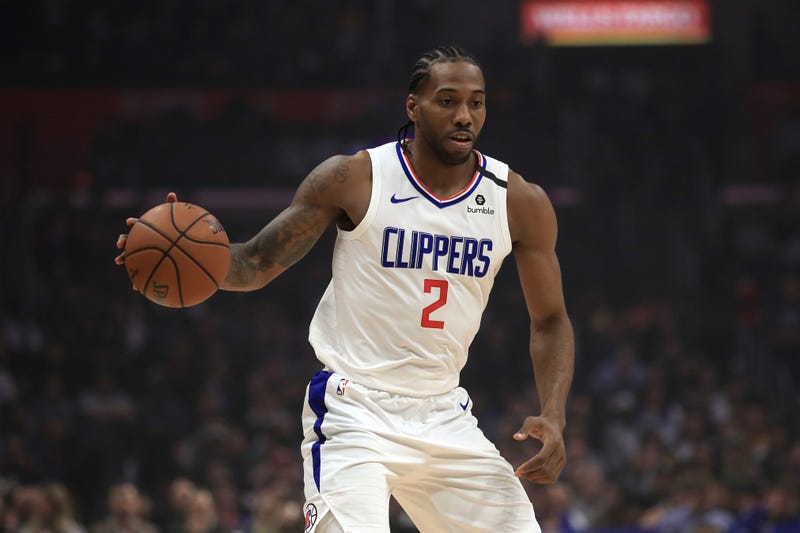