RADIO.COM Sports NBA insider Ric Bucher summed up the irresistible allure of trade rumors in a way that I couldn't have phrased better myself, so in lieu of my usual long-winded introduction, I'm going to leave you with Bucher's spiel.

For context, Bucher started this little rant after discussing buzz surrounding a James Harden-76ers trade that had picked up steam after former Rockets executive Daryl Morey joined Philadelphia. You can listen to this full episode of "Scal and Pals," featuring Bucher and former NBA GM Ryan McDonough, here.

I have entered this realm where, normally, we would have these conversations on the phone. I would have them with executives and just float these ideas out there with scouts or executives or whatever, and they'd shoot them down and they'd never see the light of day. Or they'd present me with one and go, 'huh... no, that doesn't work,' or 'now that has legs.' Now we do all this in the public eye, and it gives it a gravitas that it doesn't deserve. That's, I guess, the problem that I have. A million of these conversations go on. A million of these players are discussed, and scenarios are discussed, and then the ones that make the light of day are given undue influence and have undue impact. Suddenly, you've got a player that's going sideways because he's been mentioned in a trade and the reality is, the whole damn roster at one time or another has been mentioned in a trade.

So that's the problem that I have with us having these public conversations. I do think it does damage to teams that's unnecessary and that there should be some forethought that goes into it, like, could this really happen? Does it make sense? As opposed to just throwing things against the wall... but I gotta tell you, Ryan. It's kind of delicious to do. I understand why it becomes so hard to resist, because while there was the solid red line once upon a time in my business where you just didn't do that, that line has been erased, and it's one of those guilty pleasures that I just indulged in.

So, with all that said, I can assure you that the below landing spots provided for James Harden and Russell Westbrook come with plenty of forethought. I do think that negotiations between the Rockets and the below teams make sense, though whether or not they make more sense than the Rockets keeping their two stars is up for debate. If, however, it comes to a trade being demanded — which ESPN says has become a "plausible eventual possibility" — then the Rockets won't have as much of a choice. 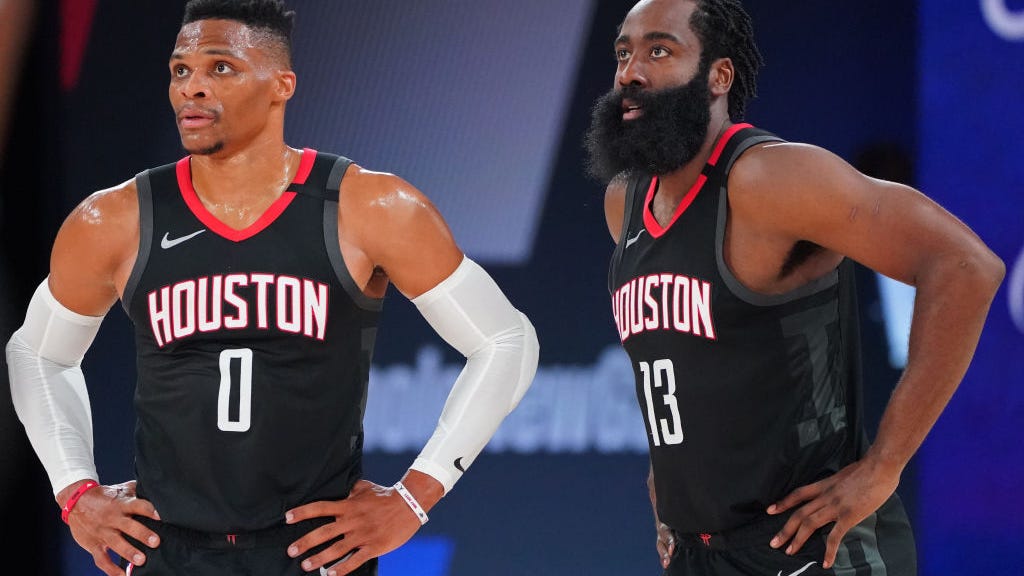 So, amid a significant amount of buzz, let's take a look at three teams who could be potential suitors for each half of Houston's dynamic duo. Because Harden seems like the piece that would less likely leave the Rockets — NBA insider Shams Charania called a Harden move a "non-starter" for the Rockets — we'll go through some options for The Beard first. 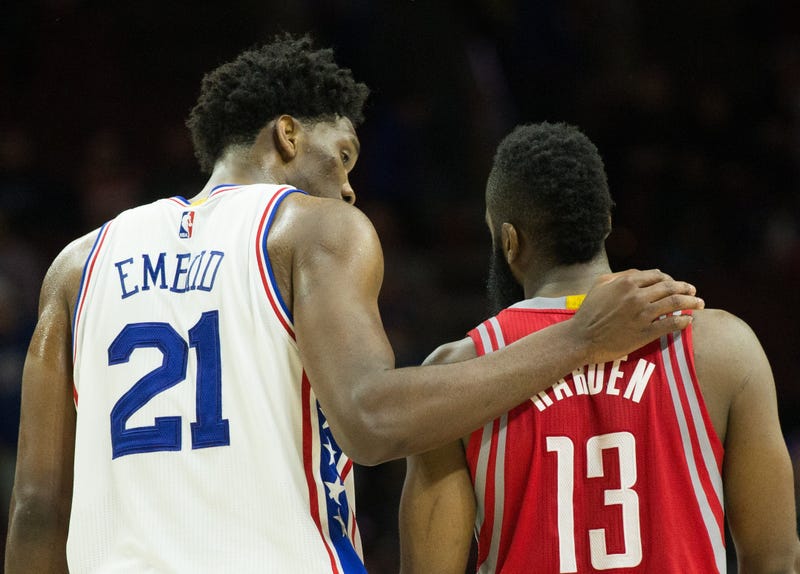 We'll start with the scenario that got Bucher talking about the concept of trade hypotheticals in the first place. Too many things make sense here to ignore.

There's the Daryl Morey hire. There's the lack of postseason success, or consistent success in general, that has come as a result of the Ben Simmons-Joel Embiid pairing. There's the precedent set by Morey in a recent interview that seems to assert that Joel Embiid is the franchise piece, meaning that Ben Simmons could be the player that Morey would want to include in the trade (though Embiid's future in Philly is by no means set in stone, either). The more important takeaway is that neither Embiid nor Simmons has so steadfastly entrenched themselves within the organization that they can't be considered in negotiations for a star player like Harden.

There's also the lack of a reliable shot creator that has plagued the Sixers as of late, and James Harden is only, well, the very best in the league at creating his own space and finding ways to score no matter what the defense looks like. Simmons would also act as a nice fit in Houston — especially if Westbrook moved elsewhere, too — considering they play a near-positionless game and possess a roster filled with capable shooters like Eric Gordon, Robert Covington, Ben McLemore and Danuel House.

Shams Charania, who I mentioned earlier as the insider that called a Harden move a "non-starter" for Houston, also mentioned that Philadelphia was interested in pursuing a trade. Then again, it's just as likely that the Sixers truly think that, under Morey, the Simmons-Embiid pair can lead to a lot of success. It's all speculation. 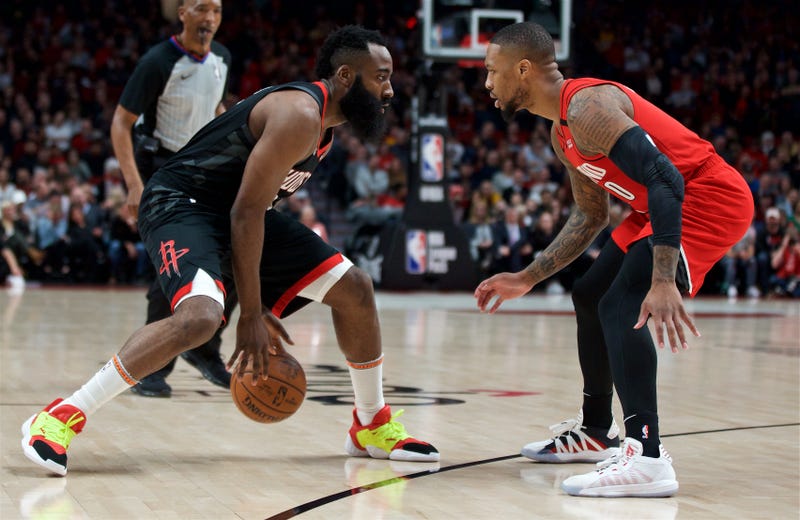 You couldn't have a backcourt of James Harden, Damian Lillard and C.J. McCollum. You just couldn't do it. One piece would inevitably need to go, and it certainly wouldn't be Lillard.

Thus, if the Blazers' experiment of Lillard and McCollum finally comes to an end after several seasons of oh-so-close production, a move for Harden could be that last step up that pushes the Blazers ahead of the pack.

What's C.J. McCollum's trade value? It's up there, at least according to NBA analyst and former player Channing Frye, who appeared on the "Talkin' Blazers" podcast and commented on the current buzz surrounding a McCollum-Celtics deal (h/t Sean Deveny of Heavy).

Clearly, teams value McCollum highly, but Houston would obviously need more. Bubble breakout Gary Trent Jr. could be another name that helps to push the needle, as would developing big man Zach Collins if the Blazers don't see him fitting next to Jusuf Nurkic down the road. The Blazers have control of all their first-round picks going forward, too, including the No. 16 selection in the upcoming 2020 Draft. 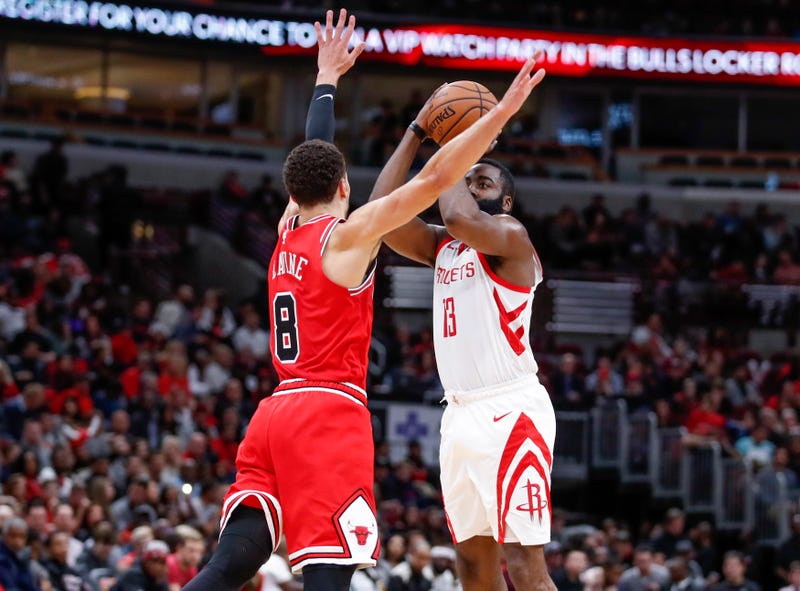 Zach LaVine would be the primary piece to go here, as his name was one that was brought up in rumors earlier this offseason and represents the team's biggest trade asset, as K.C. Johnson of NBC Chicago notes. There are some other expendable pieces (Thaddeus Young comes to mind), intriguing young big men (Lauri Markkanen and Wendell Carter Jr.) and a load of draft capital that they could add on, with every one of their next seven first-round picks and beyond still in their possession.

That includes the fourth overall pick of the 2020 Draft, and ESPN recently labeled Anthony Edwards as the perfect match for the Bulls in the upcoming NBA Draft. Edwards has gotten comparisons to — wait for it — James Harden, among other notable NBA guards. Edwards, however, would fall short in some areas that Harden could improve on right away.

Harden would be capable of the scoring that Zach LaVine has provided. He'd be capable of the ball-handling and passing responsibilities that haven't exactly been easy to come by in Chicago: Tomas Satoransky led the team with 5.4 assists per game. The Bulls also struggled to get to the line, finishing 28th overall in free throws per field goal attempted, one of the four factors on offense. That's something Harden does better than anyone.

It'd be a massive move that completely changes the trajectory of the franchise, but I think it's intriguing to look at. 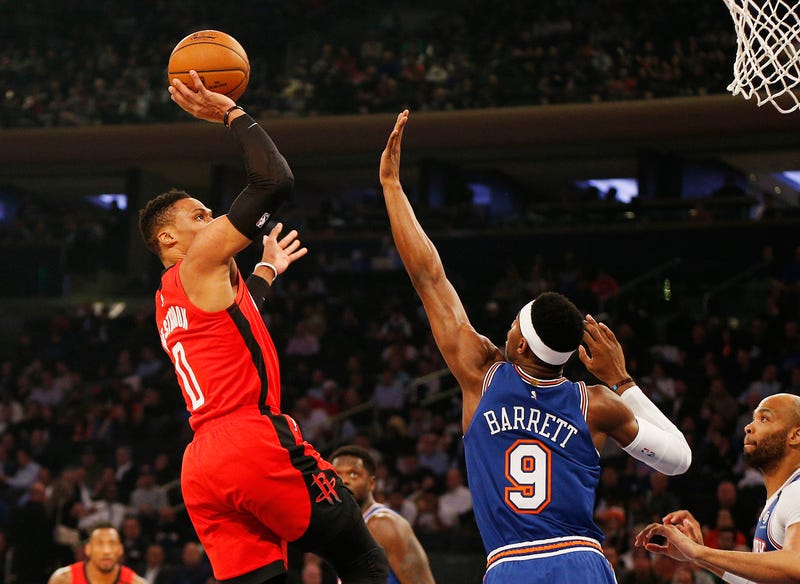 This is one that I don't personally love, but it's also one that has been reported. Ian Begley of SNY wrote about rumors circulating that the Knicks would look into such a deal:

﻿Something else to keep an eye on: some agents who represent top point guard free agents believe the Knicks would poke around on a potential Russell Westbrook trade if Houston makes him available. It’s worth noting that Westbrook, per sources, saw New York as a welcome landing spot last summer when Oklahoma City was talking to teams about potential trades.

The Ringer's Kevin O'Connor also mentioned that the Knicks have shown interest.

But where would the franchise go from there? Nowhere fast, as WFAN's John Schmeelk notes. His massive contract would weigh down the team for years to come, his style of play doesn't exactly promote the development of young players who desperately need to develop, and the acquisition of Westbrook seems like a win-now move, while the Knicks are nowhere near win-now mode.

But it's been reported, which is more than I can say for some of the other destinations that appear on this list, and it would fall in the realm of a Knicks-type move should it come to fruition. 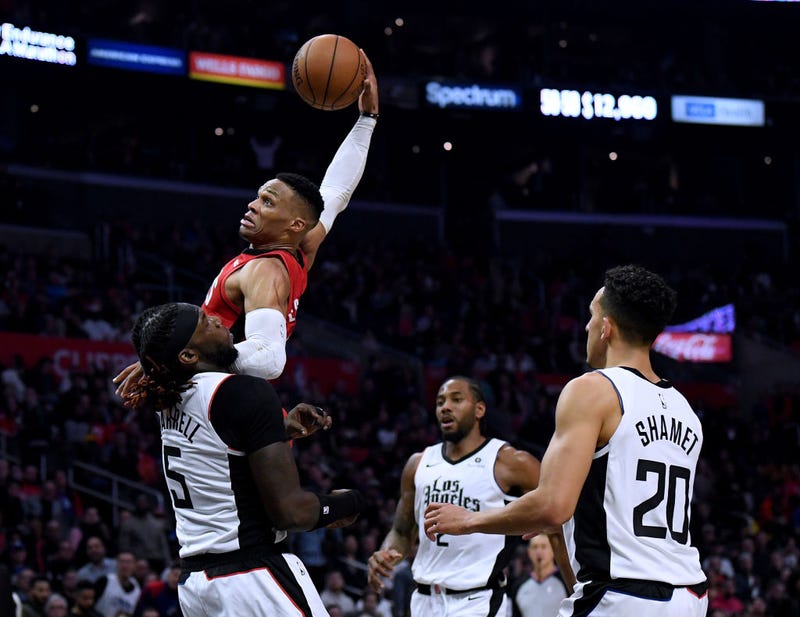 The other team that O'Connor reported as having an active interest in Westbrook is the Los Angeles Clippers, and a true super team would be the result. This would be a landing spot that would lead Westbrook and the prospective team to a lot more success, so long as it came without the subsequent dismissal of Paul George.

After all, as good as the duos of LeBron-Davis, Curry-Thompson, Durant-Irving and many others around the league are, the trio of Westbrook, George and Kawhi Leonard is an absolutely terrifying thought.

In the process, though, due to salary issues, the Clippers would have to completely dismantle the team surrounding these three stars, as Brad Botkin of CBS Sports notes. Patrick Beverley, gone. Lou Williams, gone. Landry Shamet, gone. Ivica Zubac, gone. The trade really isn't possible unless the Clippers unload a massive amount of talent, and for that exact reason I wonder whether the Clippers have genuine interest. In fact, I wouldn't have included this team had it not been reported due to the questions Ric Bucher posed in the intro of this story.

But again, they're reported to have real interest in Westbrook should he become available, and the powerhouse of stars that could come as a result makes it something to monitor. 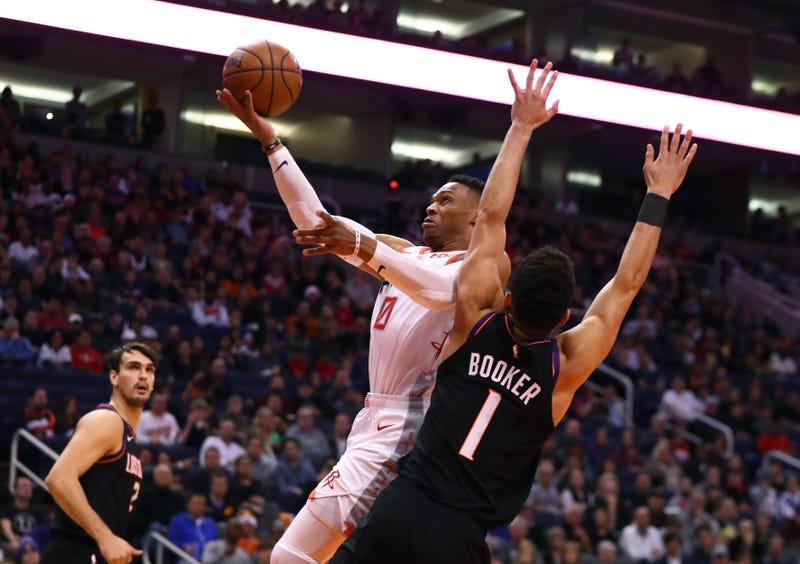 This trade would be another one that takes a great duo in the West to another level, as the trio of Westbrook, Devin Booker and Deandre Ayton would be as fun as any. This isn't to say that the Suns shouldn't be content with the supporting cast that they have, though, as Ricky Rubio and others led the Suns to an amazing 8-0 run in the bubble. Kelly Oubre Jr. is also a game-changer.

But in the era of super teams, this proposed trio could be better still, and it seems like the Suns are trying to come up with creative ways to form that trio whether it's with Westbrook or not. A recent report from ESPN's Brian Windhorst and Tim Bontemps revealed that Phoenix has had discussions with OKC about a trade involving Chris Paul.

If that one goes down, this speculative deal exists no more. But should that one just be a murmur that falls through, it could be expected that the Suns, ready to enter win-now mode, would look for another superstar guard. Westbrook fits that bill.