Listen to Audacy's Album Release Party with The Lumineers powered by GrubHub
By Jason Keidel, Audacy

The NBA is the envy of other team sports, particularly football, because of the huge contracts, guaranteed money and the lack of life-altering injuries. It also helps that there are only a dozen players on an NBA roster, while there are 53 on an NFL club, so there’s simply less money to go around.

While the NFL may own America’s sporting soul, you may encourage your kid to play basketball if he has the talent. So here are the biggest contracts in NBA history. 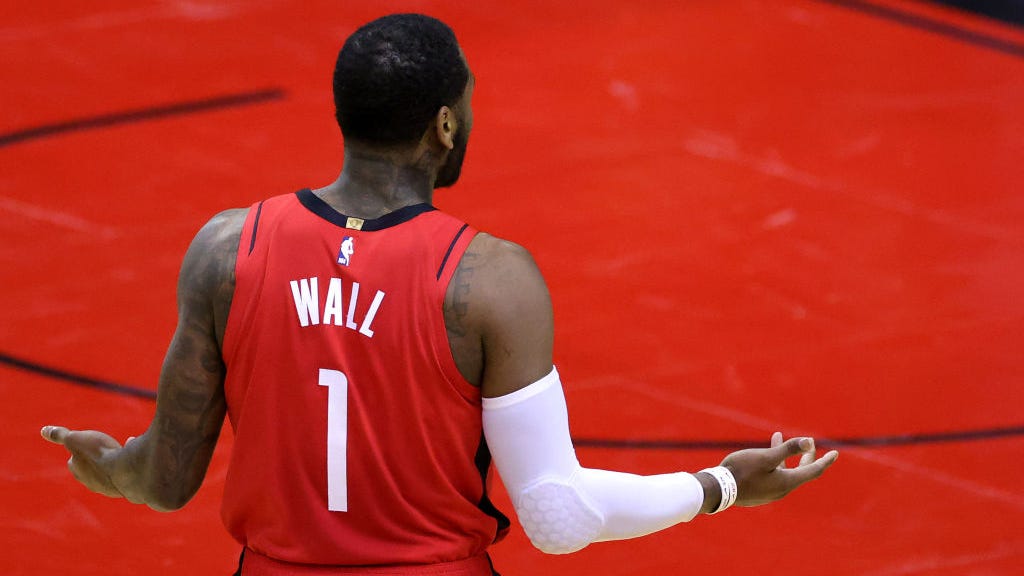 Ranking the 10 worst contracts in the NBA right now 2021 NBA most valuable franchises, according to Forbes 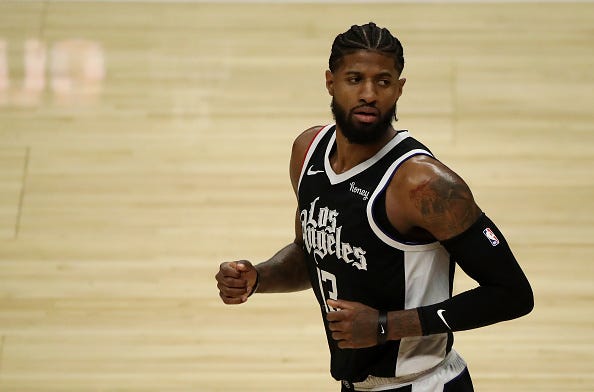 George, a seven-time All-Star and four time All-Defense, made his bones in Indiana, was dealt to Oklahoma City before finding his final home next to one of the few players better than he is, in Kawhi Leonard. At 31, George has about two prime years left before his skills start to slip, along with his chances to win a championship. 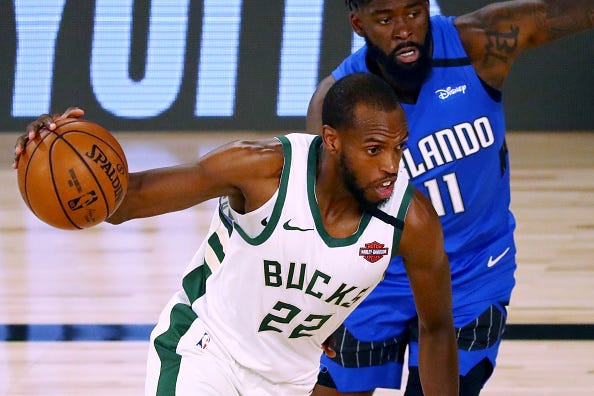 Middleton makes megabucks as the second option behind Giannis Antetokounmpo. Middleton and Milwaukee are in a logjam at the top of the Eastern Conference, battling Brooklyn and Philadelphia for a likely trip to the NBA Finals. The Bucks haven’t reigned over basketball since Kareem Abdul-Jabbar and Oscar Robertson seized the team’s only title, in 1971. 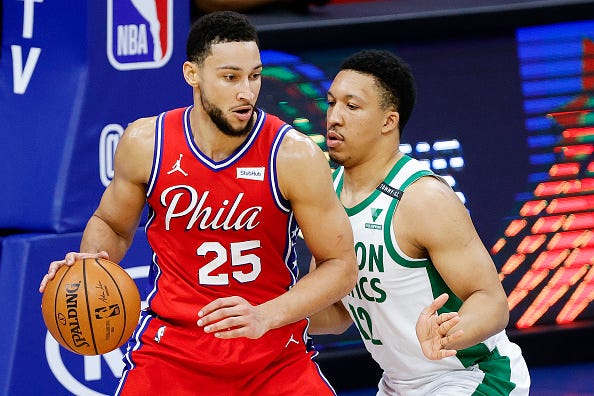 It feels like Simmons has spent a decade in the NBA, but after five years he's just 24 years old. He was robbed of his rookie season with a foot injury, but has been a three-time All-Star in his four active seasons since. At 6-foot-11, Simmons is impossible to defend, with the size of a center and the handle of a point guard. Through his career, he's averaged nearly 16 points, over eight rebounds and almost seven assists per game, while shooting 55% from the field. His skill set is so rare that when his contract ends in 2025, Simmons will still be just 29 and can name his next contract. 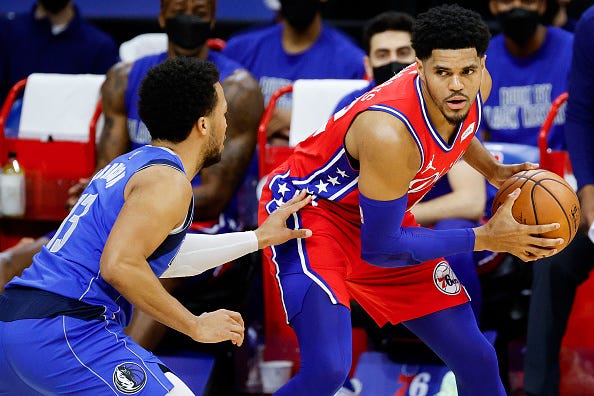 The Sixers forward has racked up some serious frequent flyer miles for a 28-year-old athlete still in his prime. Philadelphia is the fifth place Harris has called home since he entered the league at age 19. As the third-best player on a loaded 76ers squad that features Joel Embiid and Ben Simmons, Harris hopes all that travel ends this year with a championship ring. 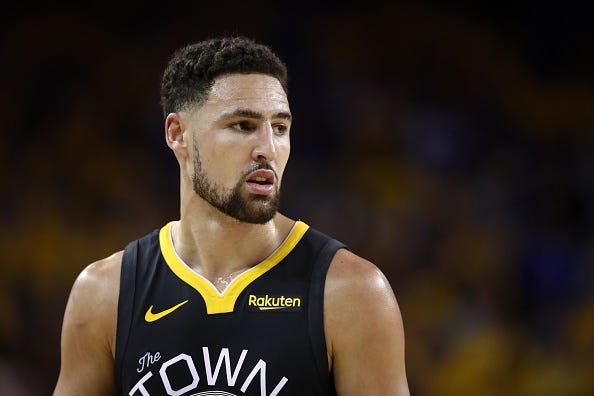 Steph Curry's wingman, Splash Brother, and hardwood soulmate, Thompson would be getting all the love as the best shooting guard in the NBA, if not for Curry. Sadly, injuries have forced Thompson to miss the last two years, but not before he won three NBA Finals in Oakland. He should be back next season. Klay Thompson also comes from fine NBA stock, with his father, Mychal Thompson, playing alongside Magic Johnson in the later years of the Showtime Lakers. 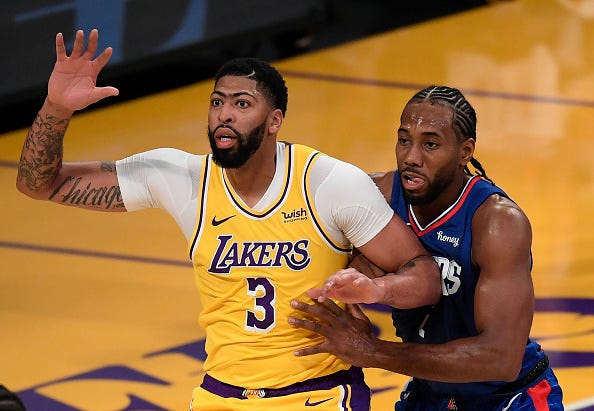 Davis has been a wildly dominant player who toiled in New Orleans for years until Lebron James summoned him to Los Angeles. The duo won an NBA Finals right away and could easily win another this year, if both are healthy. Despite his size and insane shot-blocking ability, Davis is astonishingly nimble and acrobatic on offense. Coming out of Kentucky, the college pundits compared Davis to Bill Russell. It's hard to find higher praise. 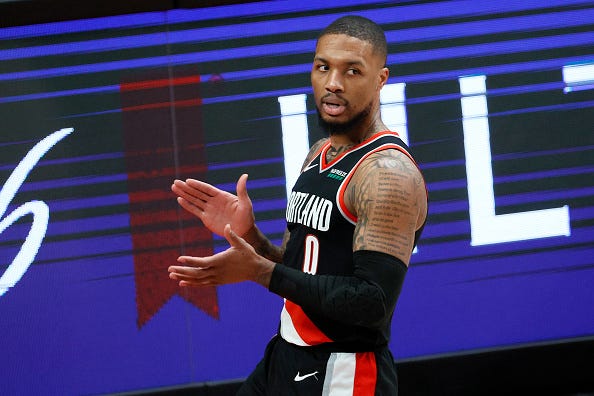 Lillard, perhaps the best and most beloved Portland player since Bill Walton, is a scoring machine who gets better as the game gets tighter. He's so clutch that they've remolded "Game time" into "Dame time." At 31, Lillard is in the final year of his previous contract before his $196 million extension kicks in for the 2021-22 season. The six-time All-Star hopes to deliver the team and town their first title since Walton did it in 1977.

*Editor’s note: At the time Lillard signed his extension in 2019, he had two years remaining on his current deal, inking him a total of $257 million over six years. 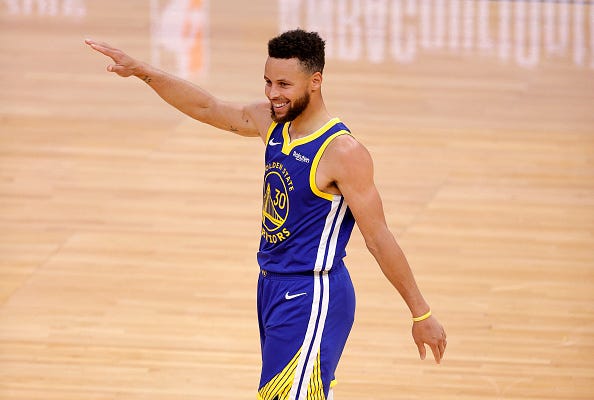 The sharpest shooter in NBA history, Curry weaponized the 3-pointer and made it an essential part of modern NBA, not just a fringe shot taken out of late-game desperation Curry is in the middle of a contract worth just north of $201 million. He will be a free agent in the 2022-23 season, when he will be 34 years old and coasting to the Hall of Fame. His pregame shooting routine is a marvel to behold. 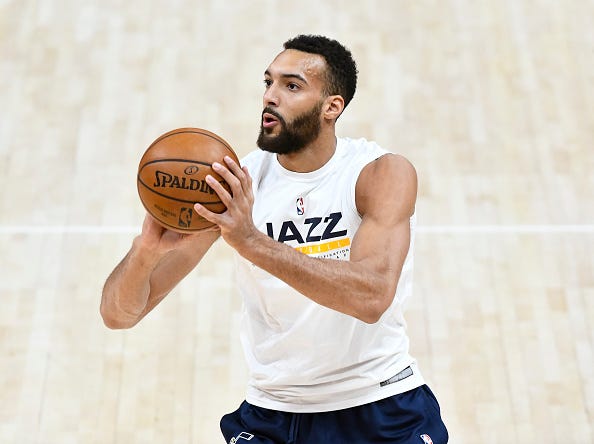 For a few months, Gobert's ability was overshadowed by the blatant disregard he showed toward the pandemic. But he has since made his apologies and the Utah center has signed the biggest contract for a big man in league history. The 28-year-old is on a loaded team with all-world guard Donovan Mitchell. Gobert may be a late bloomer by NBA standards, but his defense and court awareness make him invaluable to a team with NBA title aspirations. 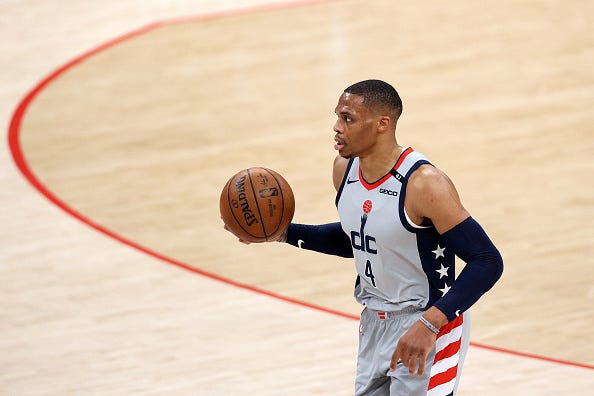 Westbrook is one of the most gifted and enigmatic players in NBA history. He joined league legend Oscar Robertson by averaging a triple-double for a season and, at age 32, is remarkably on his way to doing it for a fourth such season. Yet, with all his talent and temerity on the court, he's now on his third team in three years, something you'd never say about a nine-time All-NBA player. And it fuels the debate over a player of Westbrook's style. Can someone who needs the ball that much lead a team to a world championship? So far, the answer has been no. 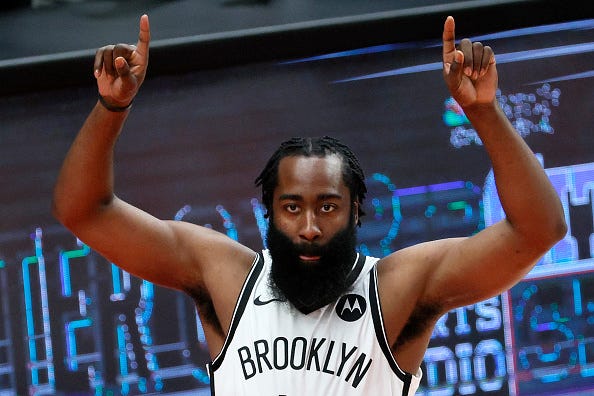 The left-handed master of the Euro-step found his way out of Houston, where he was clearly miserable, and found his way into Brooklyn, where his mood and his game spiked in startling fashion. He was working on an MVP season with the Nets until a tweaked hamstring sent him limping to the bench. Now, the Nets just hope he can heal in time for the playoffs. 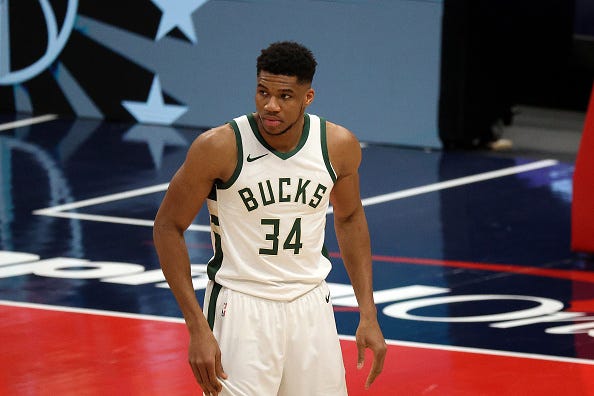 The "Greek Freak" has won the last two NBA MVP awards, can defend anyone and is impossible for others to defend. He's the third player in history to win NBA MVP and NBA Defensive Player of the Year in the same season. The other two are Michael Jordan and Hakeem Olajuwon. No wonder he is the highest-paid player in the league. 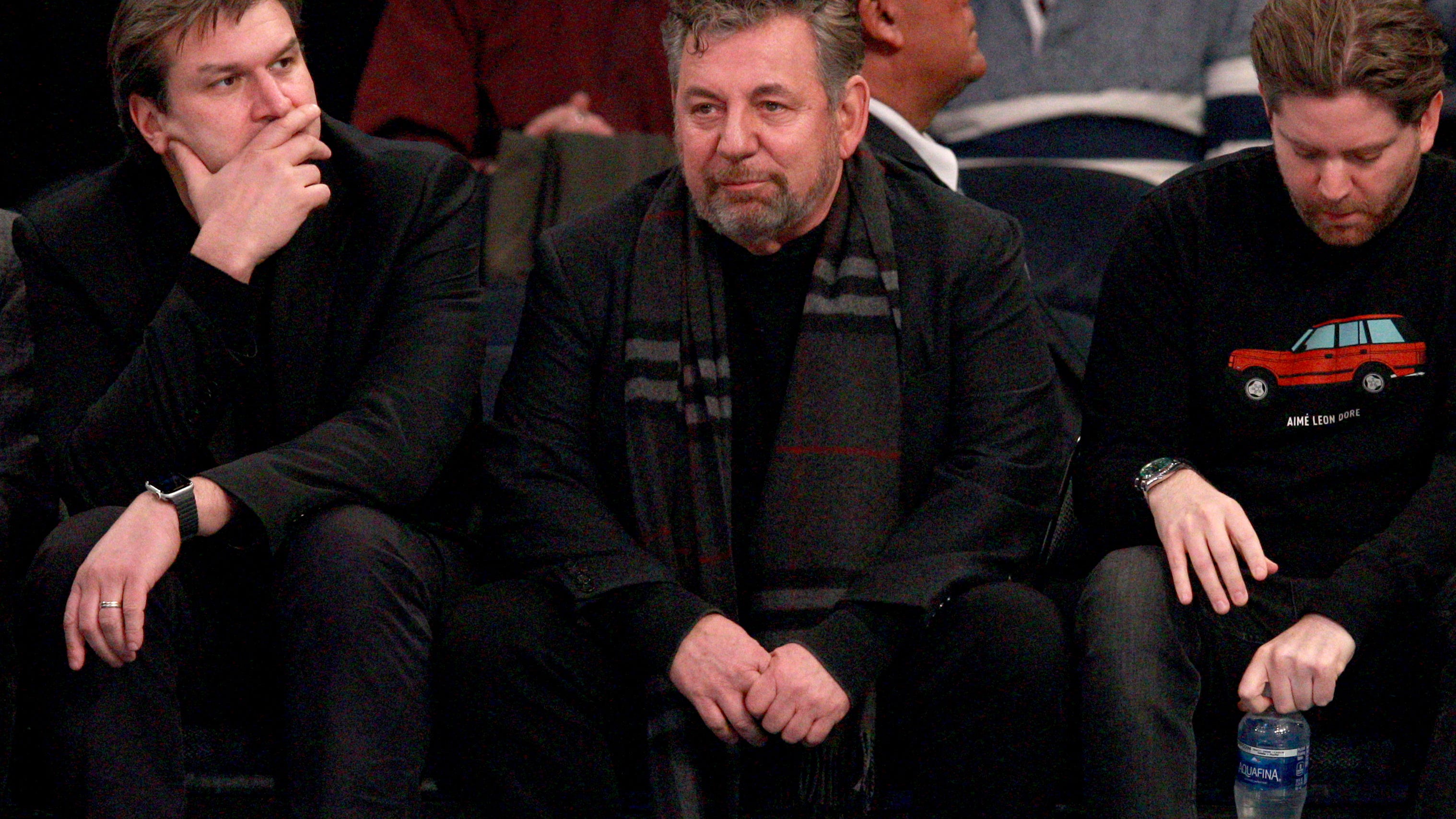 2021 NBA most valuable franchises, according to Forbes