The past year has been a much quieter one for Kevin Durant. While he has a new team in the Brooklyn Nets, he spent the year rehabbing a torn Achilles so he can be back on the court for the start of the 2020-21 season.

As Durant celebrates his 32nd birthday on Tuesday, he is also launching his new podcast, The ETCs, with RADIO.COM and Cadence13.

Durant has always embraced different media platforms to make his voice heard, and is a popular follow on social media, particularly Twitter, where he is not afraid to spar with fans. Sometimes, his tweets grab headlines -- good or bad. Here are some of his more infamous Twitter moments:

For more from Kevin Durant, listen to his new podcast from RADIO.COM’s Cadence13, “The ETCs with Kevin Durant” on the RADIO.COM app. In the podcast, Durant teams up with Eddie Gonzalez to explore candid conversations about the best in sports, music, entertainment, and culture with a slew of special guests.

I see a little exaggeration there buddy, my worst nightmare?? U sure that this is the worst that it can get???

In May 2019, Durant got into a days-long Twitter beef with FOX Sports analyst Chris Broussard. It stemmed after Broussard had said if the Warriors won a title without an injured Durant, it would diminish his legacy. Durant took exception and then things got unusual. Broussard said he has a good relationship with Durant and the two have texted in the past. Durant called him out for not having his number, while Broussard responded saying the communicate through social media. It was perhaps one of the more unusual Twitter feuds between an athlete and media. 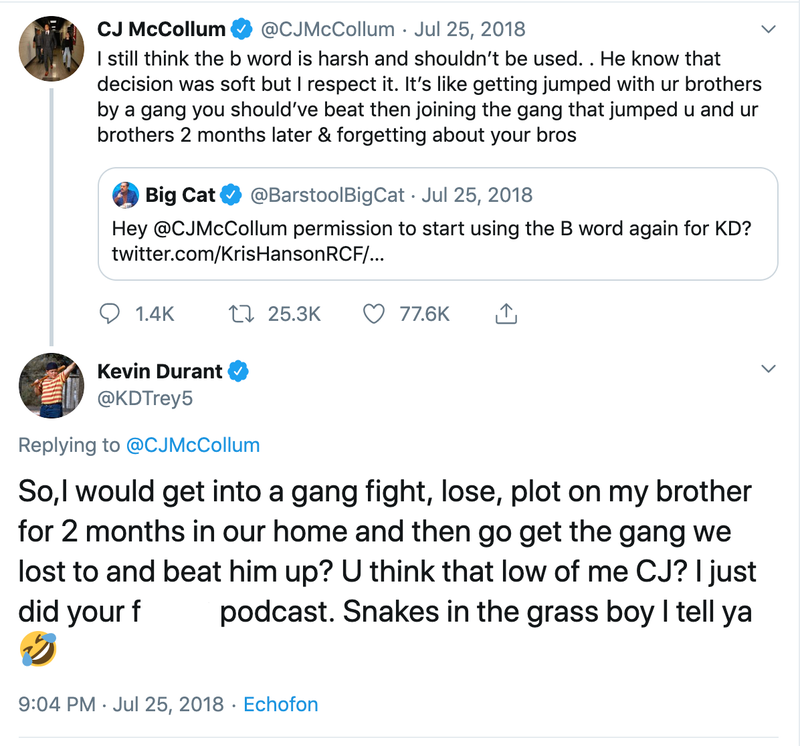 Durant had appeared on Trail Blazers forward CJ McCollum’s podcast where the two light-heartedly spoke about the criticism of Durant’s decision to join the Golden State Warriors. Things weren’t so light-hearted on Twitter. McCollum responded to a host of Barstool Sports’ satirical “Pardon My Take” podcast that Durant was “soft” for leaving Oklahoma City Thunder for the Warriors. Durant replied, calling McCollum a snake in the grass. McCollum attempted to diffuse the situation saying he won’t speak on KD and the Warriors any more out of respect and having tweets being taken out of context.

A Nets fan who goes by the name "Zee" posted a soundcloud of a rant in which he expresses dissatisfaction with Durant after he predicts the Clippers would beat the Bucks in the NBA Finals, despite the Nets being a playoff team. Durant replies with a casual "somebody's pissed" before the whole thing devolves into a back-and-forth where "Zee" accuses Durant of being a "beta male weidro" for following his girl on Twitter.

In Instagram account called “bucketscenter” posted that Durant was one of three “elite” players who do not elevate his team the way Stephen Curry and LeBron James do. Durant responded in the comments of the account, which was run by a 17-year-old, and then it escalated into an exchange of DMs. The teenager posted screenshots of the DMs, which included Durant calling the kid a “knockoff Stephen A. [Smith].”

I tried to listen to Lil B and my mind wouldn't let me do it....can't believe this guy is relevant

California rapper Lil’ B, aka The Based God, began his “Based God’s Curse” back in 2011 when Durant tweeted he was not a fan of Lil’ B’s music. Lil’ B then “cursed” Durant by saying he will never win a championship for disliking his music. Durant lost the NBA Finals to the Miami Heat the following year, but Lil’ B decided to lift the curse when Durant joined the 73-win Warriors team. He won the NBA Finals the next two years with Golden State.

KD has secret accounts that he uses to defend himself and forgot to switch to them when he was replying to this guy I'm actually speechless pic.twitter.com/9245gnpa3c

Arguably his most egregious social media mistake, Durant was exposed to having a burner account to respond to trolls on Twitter. One fan tweeted at Durant for a legitimate reason for leaving Oklahoma City and Durant replied, but he did so by referring to himself in the third-person — a dead giveaway that he meant to reply from another account pretending to be someone else. Durant confirmed he had a burner account, apologized for his error in judgement and said he was embarrassed by the incident. His rationale for forgetting to switch accounts was peculiar, though, telling GQ it was because he was sleepy.