The NBA is a star-driven league, but many players are already budding stars before they even play their first professional game.

Whether or not they continue to live up to that status and expectations is different from everyone, but we take a look at who some of the most hyped NBA prospects of all time. 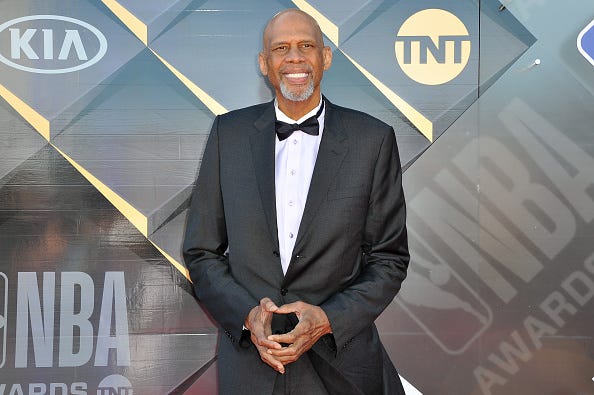 It is hard to define "hype" in an age where 24-7 media coverage did not dominate the sports landscape, but Lew Alcindor may have been the first hyped NBA player. Alcindor, who fans commonly know as Kareem Abdul-Jabbar, graced the cover of TIME Magazine in 1965 as an 18-year-old high school star in New York City, leading his team to 71 consecutive victories. While at UCLA, the NCAA banned the dunk because of Alcindor's dominance, so he developed his signature "skyhook" shot and won three national championships. Alcindor also had to choose between the NBA and ABA, being drafted first overall in both leagues, in addition to being offered $1 million to play for the Harlem Globetrotters. He ultimately signed with the Milwaukee Bucks and the rest is history.

Tim Duncan began getting hyped up as early as his sophomore year in Wake Forest when he became recognized as one of the top prospects in the game. While he was committed to stay four years at Wake Forest, many thought he would be the No. 1 overall pick if he had left his junior season. Instead, the two-time ACC Player of the Year made the rare decision of completing his degree and won every major National Player of the Year honor his senior season before being taken first overall by the San Antonio Spurs in 1997.

2007 NBA Draft came down to two players for No. 1: Greg Oden and Kevin Durant pic.twitter.com/hVbSd2udYU

The big debate heading into the 2007 NBA Draft was who to take first: Greg Oden or Kevin Durant? Both were freshman sensations, and Oden had just led Ohio State to the national title game after being named Big Ten Defensive Player of the Year. He averaged 15.7 points, 9.6 rebounds and 3.3 blocks per game as a freshman and was considered to be the game's next dominant big man along the likes of Hakeem Olawjuwon and Shaquille O'Neal. The Portland Trail Blazers took Oden over Durant with the first pick, but injuries derailed Oden's career and he was never able to live up to the expectations. 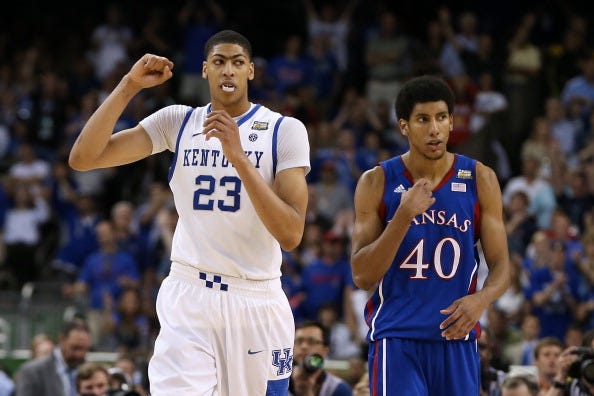 Anthony Davis was hyped before he even got to Kentucky for the 2011-12 season. Many were already proclaiming him to be the No. 1 pick before the season started due to his decorated high school career. At 6-foot-10, Davis demonstrated the ability to handle the ball like a guard and have a dominating presence in the paint like a center. He was the Naismith College Player of the Year and set an NCAA record of 186 blocks in a season en route to leading Kentucky to an NCAA championship and 38-2 season before he was the consensus No. 1 pick for the New Orleans Hornets in 2012.

No player in 20 years had gone from high school to the NBA, but Kevin Garnett was ready to break that mold. The McDonald's All-American generated plenty of buzz in NBA circles after winning Player of the Year honors in South Carolina his junior year, and again in Illinois after he transferred to another school. There was controversy surrounding Garnett's decision, though. He did not have good test scores, which factored into his decision to declare for the draft early, and may have scared teams away. The Minnesota Timberwolves took Garnett with the fifth overall pick in 1995 NBA Draft.

The Kenny Anderson hype began as a teenager in the 1980s when he began to make a name for himself as a New York City playground legend, and those skills translated at Archbishop Molloy High School in Queens where he set the New York state all-time scoring record. He committed to go to Georgia Tech where he led the team to a Final Four appearance his freshman year and after two seasons, was drafted second overall by the New Jersey Nets in 1991. His NBA career was respectable, but never quite lived up to previous expectations.

The Patrick Ewing hype began his freshman year at Georgetown when he proved to be an impactful starter on a major program — a rare thing for freshman then. After a four-year collegiate career, which included three Big East titles and an NCAA championship, Ewing was the consensus No. 1 pick in 1985, which had unique circumstances around it. The 1985 NBA Draft was the first draft chosen by the lottery system, which only added to the hype around Ewing, and the New York Knicks were the winners. The lottery method stirred controversy, with Ewing going to the sports biggest market, and conspiracy theories are still abound to this day that it was rigged to give the Knicks a franchise-changing player.

Olajuwon emigrated from Nigeria to play at the University of Houston where he became a budding star. After playing sparingly his freshman year, he sought advice from Moses Malone and returned as a force. The duo of him and Clyde Drexler became known as "Phi Slama Jama." He was named the 1983 NCAA Tournament Player of the Year, despite playing for the losing team in the championship. When Olajuwon declared for the NBA Draft, teams were desperate to tank to land him, and the Houston Rockets won the coin flip that determined the No. 1 pick. Olajuwon was so hyped, that the Chicago Bulls felt that they missed out on a franchise-changing player and had to "settle" for Michael Jordan with the No. 3 pick. 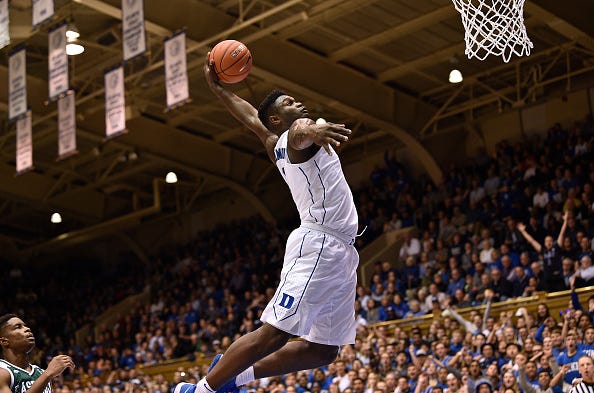 Most talented players at Duke are hated by the general basketball fan, but not Zion. As an 18-year-old freshman, he mesmerized fans across the country with his emphatic dunks and jaw-dropping blocks making him must-see TV. Ratings for Duke games spiked, and his penchant for highlight-reel plays made him the perfect prospect for the social media era. He reached a LeBron James-level of celebrity over the course of the year, and the anticipation of the NBA Draft Lottery likened the scenario of Patrick Ewing because of the Knicks' favorable odds to land Zion. Of course, it was the New Orleans Pelicans who won the sweepstakes and took him with the first overall pick.

Sports Illustrated cover, 17 years ago today. The most hyped high schooler of all time, @kingjames, unlike so many others before him who were called “The Next Big Thing,” actually lived up to all of what they said he would be. A remarkable story. pic.twitter.com/bGnWEH7Q5n

Nobody has ever been more hyped before entering the NBA than LeBron James. He became the first underclassman to ever grace the cover of Sports Illustrated his junior year of high school, which included the headline "The Chosen One." ESPN2 televised his games and Time Warner Cable carried them on pay-per-view. He was the Gatorade National Player of the Year twice and was named to USA Today's All-USA First Team three times. To add to the hype, he was selected by his hometown team, the Cleveland Cavaliers, with the No. 1 overall pick in 2003 straight out of high school.