Dallas Mavericks star Luka Doncic has his home country of Slovenia in the quarterfinals at the Tokyo Olympics, sweeping the group play, including a 95-87 win over a Spain team ranked No. 2 in the FIBA rankings.

It begs the questions: can Doncic carry Slovenia to improbably Olympic gold.

Arenas, during a BIG3 press conference, expressed his complete confidence in Doncic while also taking a shot at the Mavericks roster around him.

“Can Luka [do it] all by himself? S—t, he did it for Dallas,” Arenas said. “That YMCA team he had got into the playoffs. I’m serious…he has a chance. He has a chance. Yes.”

Doncic indeed carried Dallas into the playoffs, where the Mavericks fell to the Clippers in seven games despite posting a 46-14-7 line in the elimination game.

The 22-year-old actually struggled in Slovenia’s recent win over Spain, shooting just 2-of-7 from the field, but still made an impact with 12 points, 14 rebounds and nine assists.

Slovenia is slated to play Germany in the quarterfinals next and would follow with the winner of the Italy-France game.

While Slovenia remains a longshot to reach the title game, it is possible Doncic and Co. could match up with Team USA in the championship, although the U.S. has an awfully tough field to get through.

Arenas, who has previously admitted to doubting Doncic when he came out of the draft, believes it will be tough for the Mavericks to find other great players to put around Doncic. 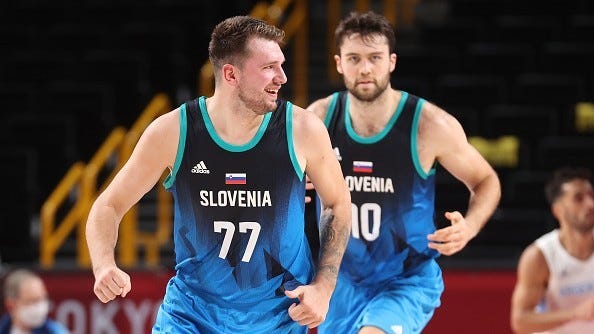 Gilbert Arenas believes Luka Doncic can keep carrying Slovenia himself: 'He did it for Dallas'