Wow. The day has finally come. The moment has arrived in which we're not debating whether the GOAT of basketball is Michael Jordan or LeBron James.

But that's not because the GOAT debate has been settled — don't be silly — it's just that another talking point, another name, has been brought up that complicates things a little bit. For that, you can thank Warriors and Olympic Team USA coach Steve Kerr, who has been a teammate of Michael Jordan and a coach of Kevin Durant. He said something that naturally put the two head-to-head and, eventually, gave one player the advantage in terms of natural skill set and physical tools.

"(Durant) just showed he's the most talented basketball player on earth, if not of all time," Kerr told NBC Sports Bay Area's Raj Mathai. "Honestly. He's just so gifted. I loved coaching him, and I'm looking forward to doing so again."

Most talented basketball player on earth? Totally fair. After all, he just averaged 34.3 points, 9.3 rebounds, 4.4 assists, 1.5 steals and 1.6 blocks per game on .514/.402/.871 shooting splits throughout the Nets' postseason. His 49-point triple-double in Game 5 was one of the greatest, if not the greatest, playoff performance we've ever seen. And his 48-point Game 7 wasn't too shabby, either, even though it didn't give his Nets a victory. No one is really arguing that there is a more talented player in the world right now, especially not after some of those showings. 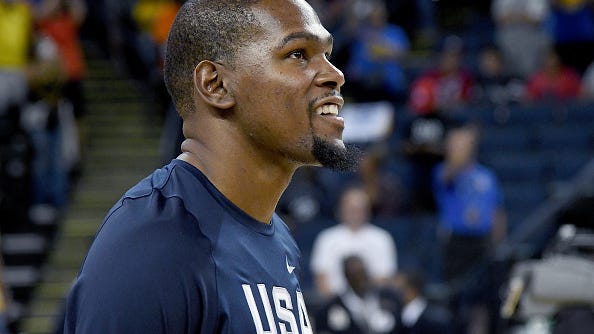 Kevin Durant to play for Team USA in Summer Olympics

But "of all time" makes us hit the pause button. Who else but Steve Kerr, though, should we consult on such a matter? He won three rings with Jordan in His Airness' second three-peat, watched Kevin Durant (and Stephen Curry) win two rings together under his guidance and saw LeBron defeat his Warriors while putting up an incredible line of 29.7 points, 11.3 rebounds, 8.9 assists, 2.6 steals and 2.3 blocks per game. He's seen the best of the best. He probably has way, way, way more equity in this conversation than 99.9 percent of people.

"I think (Durant's) more gifted (than Jordan), I really do," Kerr said. "That's saying something, but Kevin is a different ... entirely different breed. He's 6-11 with guard skills, unlimited 3-point range, passing, shot-blocking -- his shot-blocking at the rim, it's just stunning. Watching him this year was really, really gratifying to see.

"You think about what he did for this organization, not only helping us win titles but to come back and try to play through injuries and then suffer the devastating Achilles injury, we all just wanted to see Kevin healthy and to see him in the playoffs playing at the level he reached, it was really, really gratifying for all of us."

Coincidentally, another great with ties to Kerr and Jordan — the one and only Scottie Pippen — happened to opine that Durant was not at the level of LeBron.

"James is a complete team player who understands team and winning. Has [Durant] gotten to that level yet? He went home," Pippen told Yahoo Sports (via David Lazar of the New York Post). "I think he still has some learning to do in terms of what it takes to will a team to victory.

"...But I see a lot of a talk now going on about, 'Has he surpassed LeBron James?' Surpassing LeBron James takes a little bit more than an individual’s effort."

MJ, LeBron, KD... what a complicated little triangle we have here. There probably will never be an easy fix or answer here, unless some once-in-a-millennium player comes along and blows all three of them out of the water. I'm looking at you, 2021 NBA Draft class.