Kevin Garnett is setting the record straight when it comes to his alleged infamous “Honey Nut Cheerios” comment.

The Hall of Fame star recently sat down with GQ and was asked about the 2013 on-court altercation with former Knicks star Carmelo Anthony at Madison Square Garden, which stemmed from Garnett reportedly telling Anthony that his then-wife, La La, taste like Honey Nut Cheerios.

Garnett’s denial falls in line with what La La, who has since divorced Anthony, said in her book, “The Love Playbook,” in 2014.

“Kevin Garnett had never said that I tasted like Honey Nut Cheerios,” she wrote. “I tried to figure out how this big lie was turned into a media firestorm. I still can’t answer that one … Melo and Kevin are cool today. And now it’s nothing but a faint memory.”

Whatever Garnett, who earned a reputation as one of the game’s dirtiest trash talkers, said to Anthony, it certainly struck a nerve.

Following the game, a 102-96 Celtics win, Anthony sought Garnett outside the Celtics’ team bus and was given a one-game suspension by the NBA.

Anthony told reporters at the time, “there’s certain things you just don’t say” to another man, which is also what La La said he told her, according to her book.

“I asked Melo about it and all he said was that Kevin said things you shouldn’t say to a person you have a friendship with or respect for,” she wrote. “[Melo] told him, ‘I’m not some rookie. We’ve been in this league a while together so don’t treat me the way you’d treat a rookie.’” 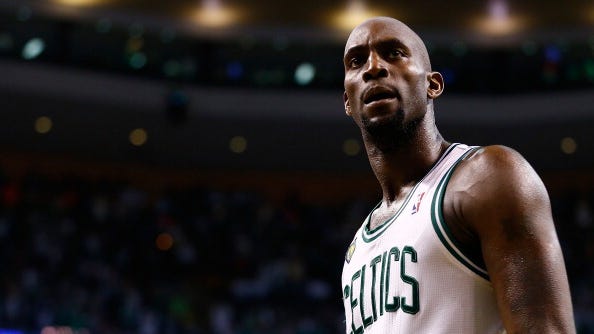