The NBA returns Tuesday night with the first two games of their 2019-20 slate. With basketball back, so too are NBA hot takes, it would appear.

NBA icon Michael Jordan was, in passing, asked about whether Golden State Warriors shooting guard Steph Curry should be offended that he's not on Jordan's "most unbeatable pickup players" list. On his own, Jordan took things a step further:

While speaking to Craig Melvin on "Today," Jordan was asked if he would amend the list of players he said would be unbeatable in a pickup game back in 2013. Jordan said he wouldn't, sticking with Hakeem Olajuwon, Magic Johnson, Scottie Pippen and James Worthy on the list.

"So, Steph Curry shouldn't be offended when he watches this," Melvin asked.

"I hope not. He's still a great player. Not a Hall of Famer yet though," Jordan said. "He's not." [Via Sports Illustrated]

Jordan's declaration seems to be very misguided. There are Hall of Fame debates - think Philip Rivers or Mike Mussina - that reasonable people disagree on. Curry doesn't fall into that category.

Now 31, Curry is a two-time NBA MVP, three-time All-NBA first team, has won an NBA scoring title, has led the NBA in steals, has the highest free-throw percentage in NBA history and is widely considered to be the greatest three-point shooter in the history of the sport. In terms of influencing the style of the way the NBA is played now, Curry may be the most important player in this era. 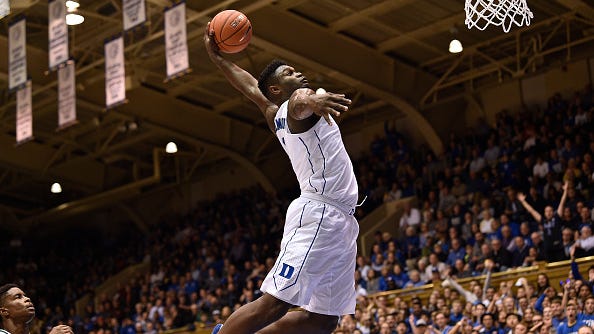 The Top 10 Most-Hyped NBA Prospects Ever

Curry is also a three-time NBA Champion, and has led the Golden State Warriors to five consecutive Western Conference titles. If the Warriors of the last five years - especially the three years that featured Kevin Durant - aren't the greatest team in NBA history, they're in the discussion.

Then again, they are competition in that sense for the 1995-96 Bulls, who won a then-NBA record 72 regular season games. The 2015-16 Warriors won 73 regular season games, but ultimately fell in seven games in the NBA Finals to Lebron James and the Cleveland Cavaliers.

Perhaps the strangest angle of this is that Jordan and Curry are both two of the most notable North Carolina natives. Jordan is now the owner of the Charlotte Hornets, who Curry's father, Dell, spent the bulk of his career playing for.

music
Katy Perry let us in the delivery room with Orlando Bloom Father's Day post
music
Someone should check on Jake Gyllenhaal and his scarf status after all the Taylor Swift 'Red' memes
news
American Airlines cancels hundreds of flights, latest company to claim labor shortages
music
Vote on the Audacy Country Top 20 with Jesse Addy
music
Alex Trebek's daughter pays tribute to her dad on Father's Day: ‘The world is not the same without you’
music
Rob Lowe shares video jamming out to ‘Bohemian Rhapsody’ while stuck in traffic