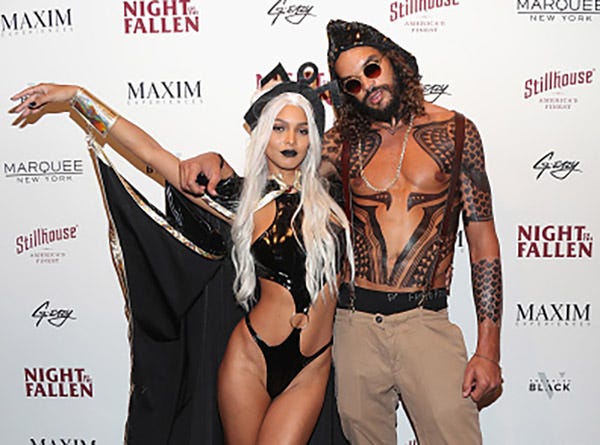 Ribeiro, 28, revealed on Instagram Saturday that her 34-year-old NBA boyfriend proposed to her while the two attended the Burning Man festival — her “favorite place in the world” — in northern Nevada.

The photo showed a topless Ribeiro hugging Noah under a tent.

“I’m a bit late for Burning Man pics and of course I didn’t touch my phone for 5 days and I don’t have a single pic but thanks to my bff @jeromeduran he captured one of the best moments of my life!” she wrote.

Noah, a 12-year NBA veteran who played last season with the Memphis Grizzlies, also posted a photo on his Instagram of the two kissing on top of a car.

Proposing to you was the easiest decision of my life. Seeing that smile riding the playa at the burn... I will never forget that. I got your back picanha!!! I know you know because I tell you everyday. I love u. On another note this wedding is about to be lit. 🔥🔥❤️❤️

“Proposing to you was the easiest decision of my life,” he wrote.
“Seeing that smile riding the play at the burn…I will never forget that. I got your back picanha!!! I know you know because I tell you everyday. I love you. On another note, this wedding about to be lit!”

Ribeiro burst onto the scene in 2010 for Victoria’s Secret and became an Angel in 2015. She has also appeared in the Sports Illustrated swimsuit edition.

Noah has seen his star dwindle over the last few years. The former two-time All-Star with the Chicago Bulls has struggled to stay healthy on the court, which contributed to issues he had during his time with the New York Knicks, ultimately resulting in the team releasing him from his contract and signing with the Grizzlies.

Noah is still looking for a team, but the center has at least found his partner for life.