Amid drama at ESPN stemming from a video that featured Rachel Nichols making comments about the network and Maria Taylor, it was announced that Nichols would be removed from her role on the sidelines during the broadcast of the NBA Finals. Replacing her in that role will be Malika Andrews.

ESPN also canceled Tuesday's show of "The Jump," which Nichols hosts, although it plans to resume it on Wednesday, per Andrew Marchand of the New York Post.

The decision comes after a New York Times report shared recordings of Nichols from July 2020, who was not aware she was on camera, in which she complained that ESPN gave Taylor hosting duties for "NBA Countdown" due to "pressure" the network was facing regarding diversity. She also claimed that the job was written into her contract. 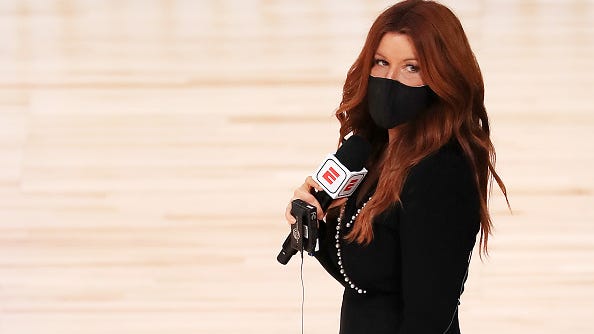 “We believe this is the best decision for all concerned in order to keep the focus on the NBA Finals,” ESPN said in a statement (via Andrew Marchand of the New York Post).

Nichols apologized to open Monday's edition of "The Jump," sharing "how deeply, deeply sorry" she was for disappointing Taylor and others who she may have hurt from her comments.

“The first thing they teach you at journalism school is don’t be the story. I don’t plan to break that rule today or distract from a fantastic Finals,” Nichols said emotionally. “But I also don’t want to let this moment pass how much I respect and how much I value our colleagues here at ESPN and how deeply, deeply sorry I am for disappointing those I hurt, particularly Maria Taylor, and how grateful I am to be part of this outstanding team.”

Though Nichols will not take her spot on the sidelines during the NBA Finals, she will continue to host "The Jump."