Watch our Audacy Live with BTS
By Jordan Cohn and BJ Barretta, RADIO.COM

A small, shining “Jumpman” logo sits squarely on a white wooden door in the middle of Joshua De Vaney’s house. It serves as a hint to what lies beyond the otherwise unassuming slab of oak in De Vaney’s Western Australia home.

The door, once opened, serves as a jaw-dropping portal back to 1990s Chicago. The redness of the room is overwhelming; dim lighting from the ceiling only serves to exaggerate the glow of checkered floor tiles, half red with a black “Jumpman”, the other half black with a red Bulls logo. A human-sized Michael Jordan figure stands against the back of the small space, no larger than a storage closet, or perhaps an oversized pantry. 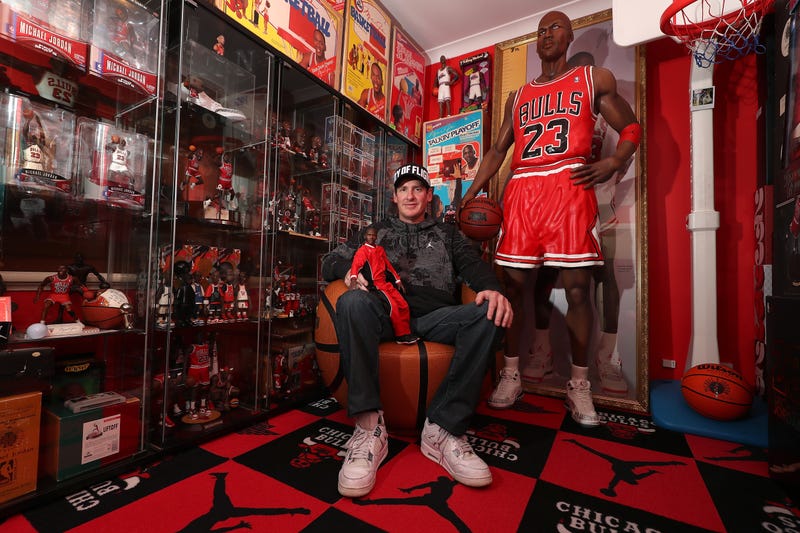 The walls are lined with quite literally every Michael Jordan toy imaginable. Clear glass displays are stuffed to the gills with legos and various brands of action figures alongside hundreds of toys you never knew existed, including but not limited to the official Michael Jordan Wall Ball Hoop, the Lil Sport H.O.R.S.E. MJ action figure, and Space Jam Trophy Treats. Atop these cases are vintage Jordan Jr. Jammer hoops, surrounded by Jordan-themed lockers, posters, plaques and more.

On the right side of the room, adjacent to the large MJ figurine, De Vaney has constructed a shrine of sorts, with another large Jordan figure (from the torso up) placed atop a stack of Enterbay MJ posable action figure boxes. His arms are extended in an almost divine fashion, replicating his famous "Wings" poster and spread over a group of smaller, seated action figures. Included in this group are a couple of Michael Jordans, of course, but also Woody and Buzz from Toy Story, just in case you needed an extra dose of 90s nostalgia. 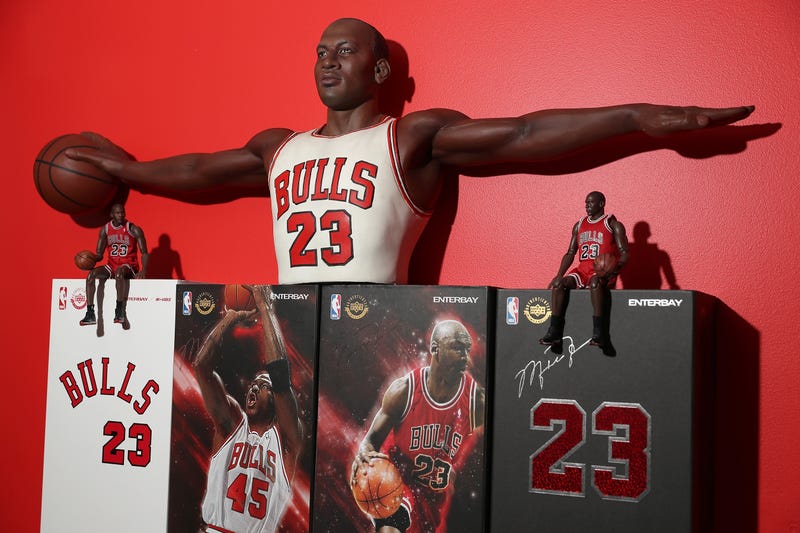 This description, in itself, hardly does the room or De Vaney’s MJ collection any justice. I’ve yet to mention a basketball hoop, peering out behind the large MJ figure toward the back of the room.

It was this hoop, though, that brought the whole collection into being.

“There’s a basketball hoop you can see in the background just here,” De Vaney said, panning the camera over his shoulder. “So I had that hoop originally back in 1994. It was one of the very few Michael Jordan toys that made it to Australia, and my parents had bought that for me as a gift.

“Fast forward to 2014, I was working… and I was just searching eBay one night and I stumbled across it. Remembering all those great times that I had with that hoop, I was able to purchase it off eBay and that’s basically the start of this whole collection.”

This demonstrates one of the many ways the collection serves as more than just a group of toys. Part of De Vaney’s inspiration to acquire such a massive body of MJ memorabilia was deeply rooted in his own nostalgic experiences. In fact, De Vaney’s love for Jordan may not have even been the primary motivator in starting his collection.

Believe it or not, the man known as the MJ Toy Historian -- and rightfully so -- grew up a Magic Johnson fan.

“I have to declare this from the start,” De Vaney said. “I’m a lifelong Los Angeles Lakers fan. I’m a diehard LA Lakers fan, which [sort of throws a lot of people off].

“I figured a Magic Johnson collection would be a very small collection of toys, which it was. Michael Jordan has so many.”

Even more peculiar is that MJ was not necessarily the primary reason De Vaney was drawn to the Bulls.

“In the 90s, I certainly was aware and did follow the Chicago Bulls for a great reason, because of our fellow Perth and Australian Player Luc Longley, who played… with the Bulls at that time,” De Vaney said. “Having that connection between us and Luc certainly drew our attention, but obviously the world was well aware of Michael Jordan at that time.”

Longley was acquired by the Bulls in the middle of the 1993-94 season, thanks to a trade that sent him from Minnesota to Chicago for role player Stacey King. Longley developed into more than a role player for the Bulls, however, starting regularly at center throughout the Bulls’ second three-peat, from 1996 to 1998. The first Australian to play in the NBA, the 7’2” Longley now coaches in his native continent, and is able to watch the likes of Ben Simmons, Patty Mills, Aron Baynes and several other Australian stars follow his path.

As soon as he realized the extent to which he could build a collection around Longley’s teammate, De Vaney took off. He purchased the aforementioned hoop first, followed by a Space Jam toy, and never looked back.

“I was just looking on eBay, purely out of curiosity, just to see what other Michael Jordan toys were available,” De Vaney said. “At that time I just started buying one after the other of every different Jordan toy I saw. After work, I would spend a lot of time just going through eBay, researching and looking for stuff and really just teaching myself what was available out there.”

De Vaney notes that he began collecting just over five years ago, though the memorabilia ranges from 1987 to the present day. Over 150 different types of Jordan pieces make up his massive timeline of MJ toys, the majority of them action figures. Though shoes interest him, he says he’s primarily focused on his toy range, including these action figures and basketball hoops.

De Vaney says a ballpark estimate of how much money he’s spent on this collection lies just over 100,000 Australian dollars, with a 75-25 split between product and shipping. As much as he’d like to put a value on the collection -- and he believes it’s worth “ a lot more” than what he’s paid -- there is one toy with an especially elusive valuation.

It’s this toy that De Vaney considers his prized possession, and it additionally details an important aspect of Jordan’s legacy.

De Vaney pegs the rarest toys in his collection as the earliest ones, created in 1987 by Ohio Art.

“That’s the pre-production H.O.R.S.E. figurine that never went for sale or into mass production,” De Vaney said, explaining which item in his collection is worth the most. “They’re the ones that I’ve been more or less associated to have discovered the great history and awareness of [sic].” 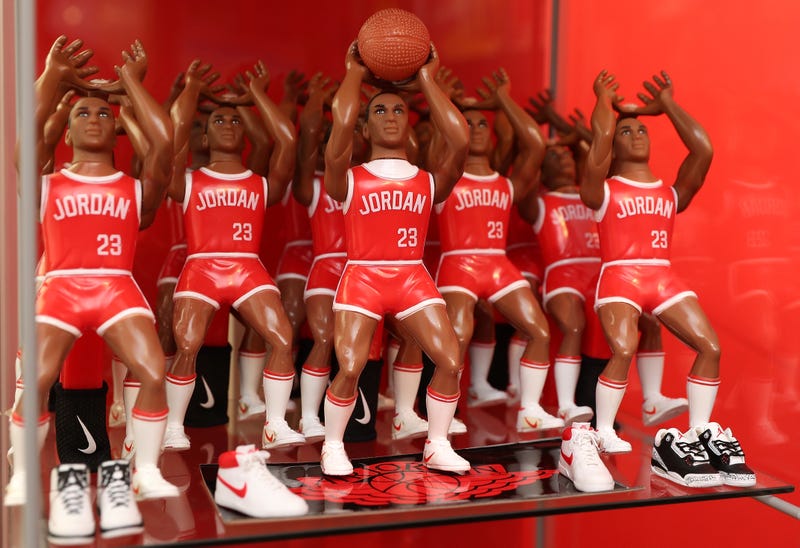 When De Vaney purchased the first of these figurines, he was thrown off by the odd packaging. There was nothing more than a clear, plain plastic bag. No label. No box. No brand name. Nothing. De Vaney contacted Ohio Art, who told him that these were pre-production, prototype items, which were “basically meant to be destroyed” after their creation. De Vaney jumped at the opportunity, continuing to collect as many as he could find.

“I got into contact with the Ohio Art archives department which told me… that there were only 48 of these available, and I was in possession of 33 of them at the time,” De Vaney said, further explaining the value of the toy. “This is my favorite piece... there’s so much more depth to this toy because of the shoe he is wearing, because of the time it was… in Jordan’s career.

“That’s when he was looking at leaving Nike. And the reason why that’s so important is because the shoe that this toy is wearing is a Nike Air Ship.”

The Air Ship earned its legacy after the NBA allegedly banned these shoes, given to Jordan by Nike. Jordan and Nike have a lengthy relationship that came to the surface to some extent in “The Last Dance”, earning a lot of media attention and making sneakerheads salivate at the thought of such rare kicks.

Since it’s another #TheLastDance Sunday, I had to bring out the top kicks in my collection. True grails! One of the first two pairs of @Jumpman23 sneakers @Nike gave MJ in 1984. The real “Banned” Air Jordans (AKA the Air Ship). And no, I didn’t buy these! - AG pic.twitter.com/H97kAYuSCp

Complex’s Brendan Dunne recently touted the Air Ships as potentially the most expensive sneakers on earth, and De Vaney’s toy is wearing those very shoes.

The 33 incredibly rare figurines in De Vaney’s collection recently became 32 after he decided to send one to a deserving owner.

“I’ve been able to get one to Marcus Jordan, the second eldest son of Michael Jordan,” De Vaney said. “He’s been able to ask MJ on my behalf if he’s aware of it, of what he remembers of this toy.”

Unfortunately, De Vaney says that the Hall of Famer doesn’t remember much at all about the toy. The bigger takeaway, though, is that De Vaney’s collection is so deep and impressive that he’s been able to connect with the man at the center of it. When even Michael Jordan has trouble getting his hands on a Michael Jordan toy, you know you have something special in your possession.

De Vaney wants to keep this connection with MJ afloat, and establishes this as one of the potential ideal outcomes of his journey as a collector.

“I would love to get this over to America permanently,” De Vaney said, speaking of his whole collection. “I would love to have this displayed in Chicago or somewhere in America where the majority of Michael Jordan fans… can just go and be surrounded and learn about these toys. And that way I believe people get a lot more excited and a lot more involved and invested into his toys once they see them.

“So for me, it’s truly about getting my collection over to the States either to be exhibited in museums… [or] I would like to donate it to Michael. So I’m certainly not out trying to make a dollar off of it, I would just like to give this to Michael as part of his legacy for people to enjoy.”

It’s certainly fitting that De Vaney would like to see his homage to the life and legacy of MJ end up in the hands of His Airness.

“You can imagine over 33 years, the depth and range of his products have just been amazing,” De Vaney said. “For me, it’s the first toy range with Ohio Art that has yet to be superseded because the quality and… the packaging and everything like that was the best. The fact that his toy range in his early career was so good, it mimics his sporting and shoe line as well.