The college football season moves into Week 5 and conference play is beginning to heat up. Last week, we saw Wisconsin topple Michigan in a Big Ten showdown and USC upset 10th-ranked Utah with its third-string quarterback in what has become an eventful season for the Pac-12. There are also five SEC teams ranked inside the top 10 of the AP Top 25.

Here’s what to watch for this week:

Penn State kicks off its Big Ten conference schedule with an intriguing Friday night matchup against a Maryland team that has been tough to figure out. They put a beating on Syracuse early in the season, but followed that with a loss to Temple. The Terps usually don’t fare well against Penn State, but with a bye week to help prepare, first-year head coach Mike Locksley may have his team ready to at least put up a fight. 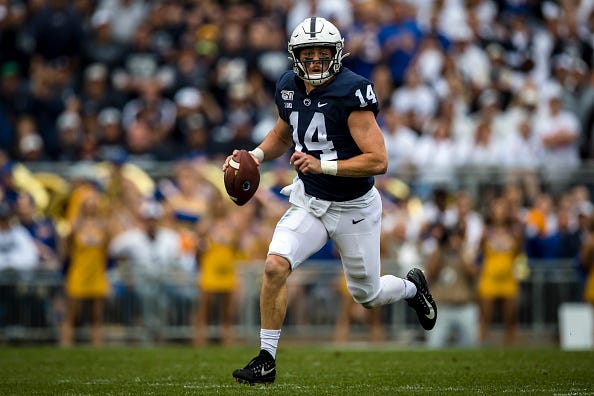 After taking No. 3 Georgia down to the wire in a 23-17 loss last week, the Fighting Irish return home but face yet another tough test in an undefeated Virginia team, who rallied for 28 unanswered points to hold off Old Dominion last week. Virginia boasts a formidable defense along with dual-threat quarterback Bryce Perkins as they present possibly the toughest home game on Notre Dame’s schedule. Notre Dame showed they can hang with SEC Georgia, and while their hopes for reaching the College Football Playoffs took a hit, they'll be looking to get back on track and continue to build an impressive resume to make its case.

USC continues to be somewhat of a surprise this season in the Pac-12. The Trojans upset Utah last week behind their third-string quarterback, Matt Fink, who may get the call under center again Saturday against the Huskies. Fink played well by taking deep shots on the Utah secondary, but Washington has prided itself on lockdown secondaries and should prove to be a tough matchup for Fink.

HOW?! 😱@USC_FB QB Matt Fink miraculously escapes from a sure sack and throws for his second TD of the game! pic.twitter.com/Qj9uEvqmJJ

This could be a classic “trap” game for Auburn. With impressive victories over Oregon and Texas A&M, the Tigers are home against an inferior Bulldogs squad and could be prone to a letdown. Mississippi State topped Auburn last year by stopping the run in an impressive defensive performance. But the Bulldogs could still be stuck with true freshman Garrett Shrader at quarterback against a daunting Auburn defense that could cause all sorts of problems.